Controls are in the description! Here is an alpha demo of venture. There is one short mission available, in that mission you must protect the villagers from incomming waves of enemies.

As this is an early alpha demo you can experience issues and/or bugs, if you do please report those on the IndieDB page!

IMPORTANT
Editor Controls:
Once you are building your creation there are some features you can use.

In the right menu are some tools you can use, once of them is very important, which is the selection tool[the Arrow].
This tool allows you to edit the placed blocks, assign keys and change parameters.

Once you are placing blocks you can rotate them with the "R" key.
With the selection tool you can also delete blocks by aiming at them and pressing the "Delete" key. 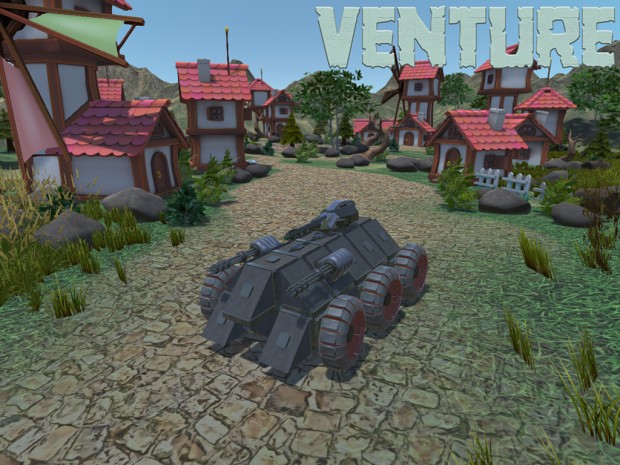 Ok so, you're prolly wondering why I went here in such a small amount of time

So at first I opened the game, it went okay. Opened up quickly with that unity logo animating. I went to my first mission to try to create my badass vehicle. There I was, making a simple truck. It was all okay, before I screwed up--big time. I accidentally put the bigger wheels AS ROCKETS. I SRSLY DIDNT KNOW. (http://tinypic.com/view.php?pic=2hx3js&s=9#.VsmwVObXuJU). I felt dumb, I really did. All I wanted was to remove these weird round objects and replace them with some real rockets, but I wasn't able to, because I didn't know where the 'reverse' or 'undo' button was.

Mortified by my disgusting creation, I just went on there and wanted to fight some baddies. But then, the controls messed up....I suppose wheels aren't suppose to be there so NEXT TOPIC! I went to the garage again to make another vehicle.... however I was yet again struck by my own lack of luck! I didn't find any 'new' button, to make a new vehicle...... so yea I went here to share what happened.

So lemme list the things that I think should be fixed on the next update:
1. Make a pop-up at first launch regarding the controls of the game and maybe what you expect from testers (so that I wont miss it! I suck at figuring out controls so yea, it would help people like me)

2. You may want to put the names of the categories rather than putting a thumbnail for each category (like writing 'wheels' for the wheels section, or 'rockets' for the rocket section, because it'll help a lot for new players, aka moi)

3. Wheres the undo button ._. is it just me or I just cant undo things

4. The 'deploy' button is somewhat 'cut off' from my screen

TL;DR
Most of the stuff I found from my short experience (I have school work I'm sry ;A;) is mostly about me not being able to figure out things. This may be fixed by some simple HUD redesign or adding some notes for new players to read before they play. I am certain that it will help other people as well

Hope my story helps you :) I like writing these kinds of things and take a break from learning for once xD

One more thing! I almost forgot! The background music likes to glitch sometimes too and dissapear occasionally

there was that one time the sound dissapeared and then the game froze, but it went back on again fortunately

The sound is fixed, thank you for adding this.
A new version is being uploaded with the fix.

wow its that fast? niceee

Thank you for your comment, in the description of the download are some of these issues you are having described.

For example to remove blocks you can use the parameter tool on the right[ The Arrow ].
Each button has tooltips to tell you what they do, for destroy your creation to create a new one.
For the category names, we could do that it wouldn't be much work, besides that we have tooltips on each piece you can build to tell you exactly if it is a wheel or a rocket :p

And you did not misplace the wheels in any way, the wheels did exactly what they were supposed to do, with the parameter tool on the right you can select the pieces and change the direction the wheel turns [or press "F" while aimign at the wheel]
You will see the arrows on the wheel turn the other way so you can visually in which direction they will turn.

Also may i know what resolution you are using? That way i can have a look at buttons not appearing in the right positions.

Thank you and regards

I got tired of Physics again and saw your email, so I went back here again :P Don't tell my teacher haha

I can't see the parameter tool o-o idk, is it just me or its because of the resolution (its 1024x768 px btw, on simple). Maybe you can make the control of 'undo' be accesible like pressing right click? That would help by a lot

I think I kinda did misplaced the wheels, the ones on the back tho, not the 4 wheels that look normal. Srsly tho i thought that thing was a rocket,... *stillfeelingdumb*

A tutorial of the controls would be great tho, I also cant figure out how to switch to FPS,.... danggit unresourceful brain!

Thank you for the comment, the resolution is a bug caused by selecting non native resolution and setting it to fullscreen.

I am aware of this issue and getting a fix for it as we speak, this is caused by Unity im afraid.

You could try using a higher resolution by selecting it in the start window when you start up the game.

It seems the bug is fixed now, another demo will be online shortly so you can play it in the resolution you see fit! :)

It seemed you only saw half of the game, so that may be why it was so difficult ;)

EDIT: new demo is online and ready to be downloaded!

I think i'll do some more testing tomorrow

I didnt even get to shoot at things because how bad my vehicle was! It loved to topple over and i got frustrated a bit e-e

I hope when you try again, it will get better with the good resolution and such.
A small tip to get you going, if you want to start shooting things you will need a turret.

In future versions i will prepare a detailed tutorial to show all of this, so no one gets frustrated :)

I will be trying the bigger resolution! Its not like my laptop is that weak, hah! this baby can take a beating

hmm maybe in the future you could add AI, even if theres no turrets. Like you could add melee vehicles that just stab people with no mercy... ? Those blades look scary as f

and yes I will look forward for a tutorial :)