New version of the mod has been released, bringing major fixes to the official 2.0.2. version of Unofficial Patch. This hotfix by default doesnt include EOP features, therefore USE The_Elder_Scrolls.bat or TESTW Launcher.exe to play the mod, definitely NOT TES UP.exe launcher. If you want to play with the full features (EOP features), use the switchers that are part of the hotfix. Intructions on how to switch are there. To read install instructions below, click READ MORE

Unofficial Patch 2.0.2 for The Elder Scrolls

OBSOLOTE - YOU DONT NEED TO INSTALL THIS ANYMORE!!!

Due to the numerous issues that people had with running the mod with EOP tool, THE HOTFIX BY DEFAULT DOESNT INCLUDE EOP FEATURES (the info on EOP is below the install instructions), therefore USE The_Elder_Scrolls.bat or TESTW Launcher.exe to play the mod, definitely NOT TES UP.exe launcher. If you want to play with the full features (EOP features), use the switchers that are part of the hotfix. Intructions on how to switch are there.

However, you can use this hotfix no matter which version are you using currently. Neverthless, your saved game will not be compatible either way.

1. Download and install The Elder Scrolls 2.0.2 Standalone. Of course, you need to apply 4GB patch or LAA patch as well, its located in your TES folder.

2. Go into your The_Elder_Scrolls/data and delete the whole "world" folder"! Otherwise your start campaign menu will be all messed up.

3. Download and install TES Unofficial Patch 2.0.2 by extracting it into your mods folder. You will know you are doing it correctly when it asks you to overwrite files, hit yes. This applies for both version, FULL and without EOP.

4. Download this hotfix, and etract it into your mod The_Elder_Scrolls folder. You will know you are doing it correctly when it asks you to overwrite files, hit yes.

To launch, use the "The_Elder_Scrolls.bat" or "TESTW Launcher.exe", not "TES UP.exe", unless you switch to full features version

If you wish to enable them, use the swithers

If you are having issues, such as being unable to launch or having frequent crashes, read the download thread to see tips, there are several ones that will help you. You should be definitely able to run the version with no issues, hence if ther are frequent crashes and similar issues, its likely on your end, see the tip below.

The download also includes SWITCHERS. If you wamt to try full features (EOP version), you can use the switchers to change your version into FULL FEATURES EOP version. The instructions on that are in each archive, called READ ME. The saves from before you switch are not going to be compatible.

(If you have already downloaded the mod, you download just the switchers, the links are in the comments. You can use the switchers as many times you want, to switch forth and back.

(the video doesnt include the switchers, but otherwise the order of doing things is pretty much the same)

Tips for fixing crashes and performance

(TRY THIS IF YOU ARE HAVING ISSUES PLEASE)

( EOP ONLY - EOP tool has a trouble with some antivirus programs. Therefore, you might have to give the tool an exception from your antivirus program, or disable it entirely when playing. The Antivirus incompatability is responsible for frequent crashes in the game, as well for removing the launcher!

Engine Overhaul Project is entirely safe! Your antivirus might flag it just because it modifies the game.

In case the launcher settings change for some reason, I show below the setting you ought to have (left upper doesnt matter, left bottom matters significantly, and the one the right side is more or less optional, only berserks fix required from those). But definitely keep full logging disabled. 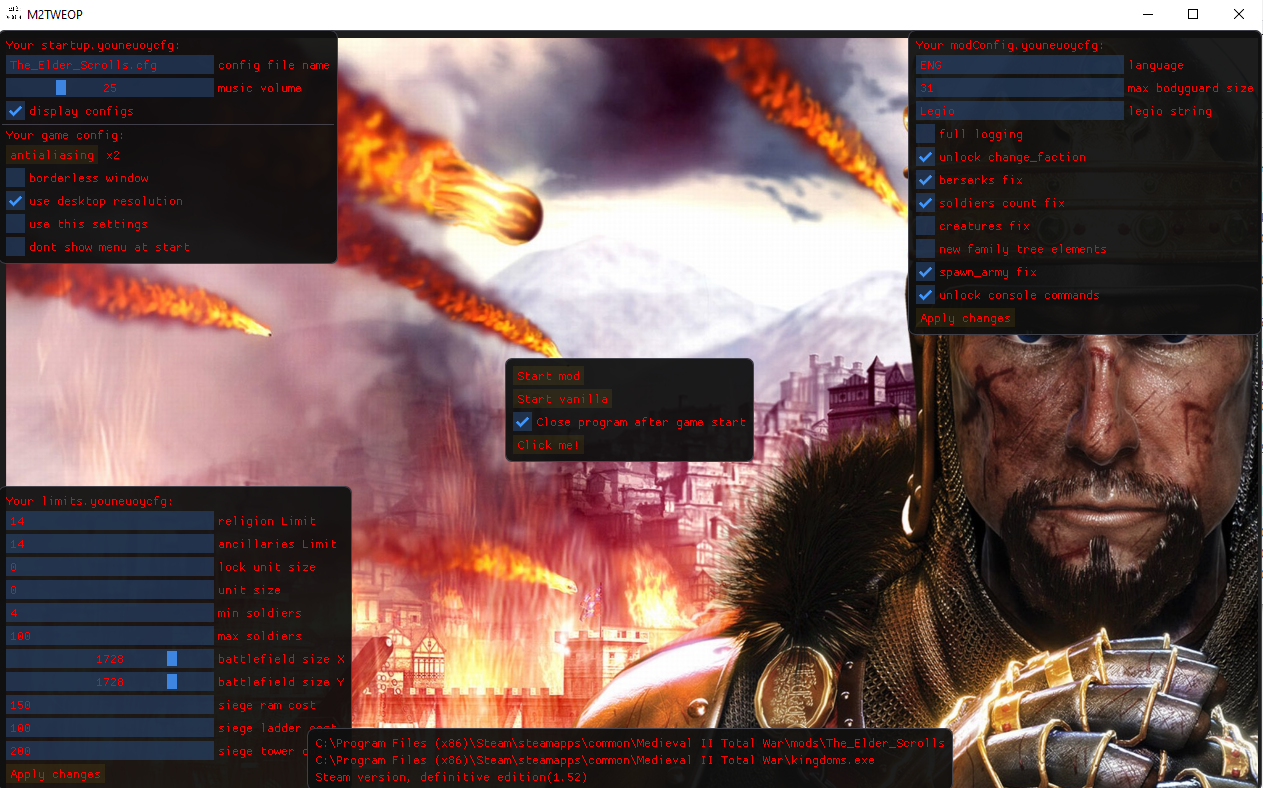 (no matter if you have Full or Without EOP version)

If you crash upon launching the game, you probably failed to follow install instructions so try again. (4GP patch is a must, apply it to both, medieval2.exe and kingdoms.exe). 4GB Patch can also various issues when playing the mod.

Running the mod as an administrator (as well as TES UP.exe) may resolve various issues, so always try that, as well as changing your compatibility mode in medieval2.exe. - LINK 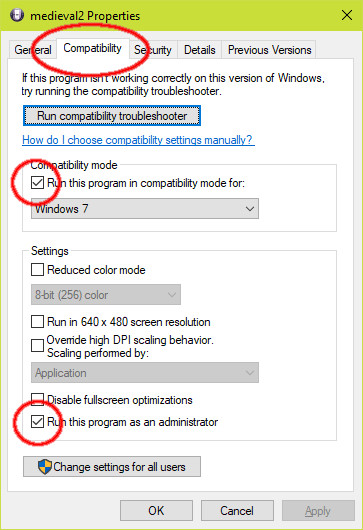 If you crash upon loading saves/starting campaigns, try running a quick/custom battle first.

If you have low FPS, try to turn off shadows, decrease unit size, or decrease your graphics in general and give high priority to Medieval II in Task Manager. If you have lags/lows FPS, you can try this TOOL.

If you have steam overlay enabled, it should help with performance greatly, if you disable it.

- Fixes to Mannimarco and Vampire scripts. Fixed the missing vamp recruitment for Orsinum

- Lowered chance of being infected by Vampirism and Lycantrophy

- Fixed the Army Upkeep Script - The secondary generals no longer receive the upkeep traits (and hence money were removed for them as well) and fixed the issue with the upkeep not working for characters at sea.

- Administrative education can now be improved due to town hall building chain, not Alchemy Academia.

- Rebalanced imperial roster, renamed some units, and made order in their recruitment tree (properly divided the recruitment tree into auxillary cohorts and "home" cohorts that are better trained)

- Fixes stats for some units, such as low tier skeletons, aldmeri, stormlords, ...

- Assigned correct models for some agents of evil factions, so that they use daedric acolytes.

- Solved the issue with graphical "cube" bug during sieges

- Fixed the issue with some reward units being silver.

- Fixed the model for Rynandor.

- Argonians are now immune to diseases as well

- Fixed the issue with stables not being availible in wooden castles

In a few days, I will try to compile a guide to the mod- to each faction, scenario and so on... :)

There are many other HUGE features included in the mod, such as new factions, campaigns, units, dungeons,... SEE the FULL CHANGELOG (includes all the feature - LINK)

Check out our forum at TWC

You can also join our official TES discord!
Discord.gg 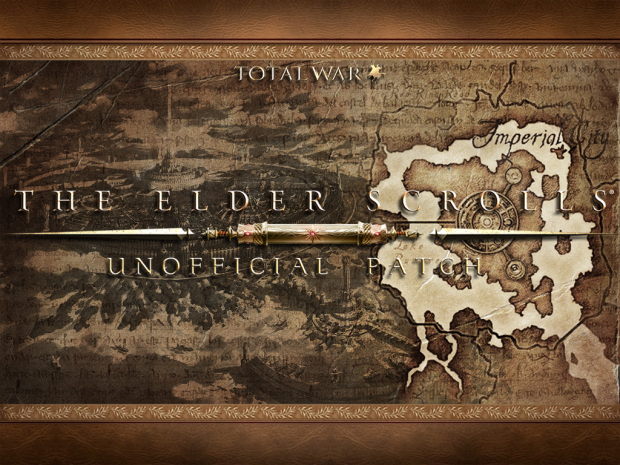 I will reupload the 2.0.2. version to include hotfix as well today

Turning off your UAC will bring your pc down to windows XP or even a windows 98 level. Twcenter.net

Ah, okay, thanks for the info, I suppose I will rather remove the tip then

Happy to help. =] Keep up the good work

Hi! Is this hotfix save game compatible?

Dear tutor, i as a lover of this mod and its features, i have a sort of a wish. Can it be possible to set the scenario into a 1st E the age of first council and have a unique playable faction as a Dwemer ?

Well, expanding to First Era would kinda require a submod to this submod, as too many things would have to be changed, and someone would have to make the models for me, so its definitely not on the plate in foreseeable future... maybe one day

hello, so I have followed instructions to the T. Yet when I download this patch and try to extract the files, all it does is download a separate file "the_elder_scrolls" and does not ask me to overwrite anything. on top of that, inside this duplicate folder says a folder youneuoy folder with no testw launcher. Yes I have applied 4gb patch and deleted the whole world folder before applying this patch. Even deleted the medieval folder and reinstalled everything 3 times repeating these exact instructions. tried to play withought this patch just to play the mod and when I press start on campain menu the whole game freezes but music keeps playing. please help I really enjoy this mod when it was working for me

This is just hotfix, did you download the full 2.0.2 (the previous donload)? The hotfix is included in it, so you dont need to download this.

Well, if its a duplicate folder or something, just merge it with the other The_Elder_Scrolls folder.

So my crashes seem to randomly occur during AI turns, usually Great House Dres or the Empire.

See the anti crash tips in the install thread, they should help... namely changing the compatibility mode seems to affect it the most.

I have tried the things, it seems to happen less often, but I still randomly crash on AI turns.
I also crash when I try to start a custom battle o.o