OUTDATED!! Look for version 1.4 and download that one!! Techno-Strike is a modified version of the popular Counter-Strike 1.6 Warzone, that makes it a more modern and crisp game. It is NOT meant to replace CS 1.6 in any way, it is made just as an alternative to it. It uses the weapon models from Counter-Strike: Condition Zero, and it uses its sounds too. This version of Techno-Strike adds 2 new weapons: An M60 Machine gun (replaces m249) and SPAS-12 Shotgun (replaces m3 shotgun), and also replaces a lot of weapon sounds too!

Run the Techno-Strike 1.2 BETA .exe file after downloading it. Choose a location for it, and let it extract.

After that, you'll want to execute the CS16Launcher.exe file to start the game. That's it!

- Added a new UI style in the main menu.

- Removed the maps from Half-Life.

- Replaced some of the gun sounds with different, more interesting sounds.

- Fixed a bug, where the overviews of the new maps where not present.

- Now ALL of the weapons have new textures!

- Added music to the main menu.

- Added music to the screen that is displayed before the team selector (MOTD).

- Added a link to my YT channel and my Yahoo address in the MOTD.

- Added the option to spawn 2 bots of each team in the game menu (H).

- Added the maps from Half-Life. They work, but there is an issue where there are more bots in the opposite team. 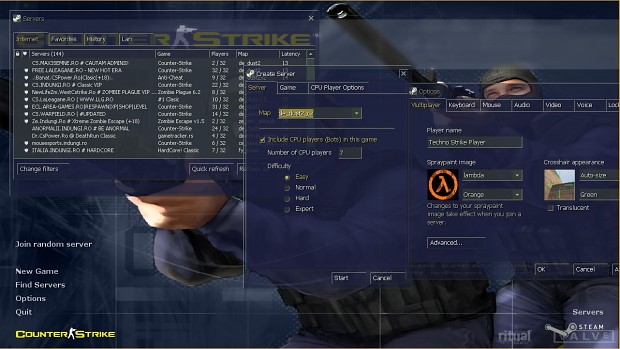 I love this mod people you should play it the servers are so full when i make my own it just gets filled.