This mod includes 3 campaigns: 355 AD - Julianus is Caesar in Gaul charged with defending it against the Franks and Germans, while Constantius II takes on the Quadi and then the Sassanids. There is suspicion and mistrust between them. There will be civil war. 361 AD - Julianus is now Emperor and getting ready to invade the Sassanid Empire. But all is not in the Empire. The Franks and Germans may have been defeated, but they are not subdued and religious division is growing, plus rebellion from those within the Empire. 365 AD - Julianus now lies dead in the sands of the East. Jovianus has come and gone and now the Empire sees it ruled by two brothers, Valentinian I in the West and Valens in the East. But there is a challenge to the throne from Procopius, a cousin of the dead Julianus.

An old world. A new faith.

It is a time of change and challenge for the once mighty and seemingly invincible Roman Empire. Not too long ago, countless devastating civil wars tore apart the realm of the Caesars, and left the Empire weak and divided. But a series of strong Emperors from the Illyrian provinces managed to stitch the troubled state back together. But the brave Aurelian, the wise Diocletian, and the great Constantine are all dead. Once again there is civil war. Once again brother stands against brother. Once again the die is cast - but can one man turn the tide?

SOMNIVM APOSTATAE IVLIANI offers the player three campaigns to choose from, involving historical characters such as Julianus, Constantius II, Shapur II, Valentinian I, Valens and the usurper Procopius. The aim of this mod is to capture the events and changes, both militarily, socially and religious that were unfolding in the era of Julianus and his dream of a new Paganism.

355AD Campaign: This campaign sees Julian, recently appointed Caesar in Vienne in Gaul. He's charged with the protection of the Rhine frontier from attacks by the Franks and Alemanni. This is to enable Constantius II to be able to deal with the Quadi and Iazyges Sarmatians and then the Sassanid Persians.

This is an intense campaign, especially for Julianus who is attacked by hordes of Franks and Alemanni, and at the same time having to contend with a rapidly shrinking economy, rebellions by those who favour Constantius II, and the possibility of being invaded by Constantius II himself.

Constantius II campaign is much easier as his financial position is better and he does not have to face too many enemies at once.

361AD Campaign: This campaign now sees Julianus as the sole Emperor of Rome. He starts at Constantinople, preparing to march East and try to emulate the achievements of Alexander the Great, as so many Roman generals have tried to do before him. But in his way stands the might of the Persian Empire, under the rule of its formidable King of Kings, Shapur II.

Although Julianus may have subdued the Franks and Alemanii, they are far from destroyed. The Iazyges Sarmatians and Quadi are poised to invade, and there is an uneasy truce with Shapur II. As if the situation wasn't dire enough, the greatest threat to a Roman Emperor have always come from within...

This campaign gives the player the chance to control the whole Roman Empire, but it is a big task, yet hopefully a very rewarding one. Where else would you be able to take on the Sassanid Persians, the Quadi, or the Gaelic Tribes all in one game?

This is the default campaign.

365AD Campaign: This campaign picks up 2 years after Julianus' death in the East during his campaign against Shapur II. Since then Jovianus was raised to the throne by the generals as his immediate successor. His first move was to quickly make peace with the Sassanids, including seceding most of Mesopotamia including the cities of Nisibis, Singara and Bezabde. However, Jovianus' reign did not last long. Soon after the ignominious peace treaty he was found dead, perhaps due to illness, perhaps foul play.

Valentinian was elected and a month later he named his brother Valens as co-Augustus. They divided the Empire in two, with Valentinian taking the West and Valens the East.

Valentinian had to contend with the Alamenni, the Quadi, and the Iazyges, who were causing great trouble, as well as the Berbers and the Gaelic Tribes. Valens had to contend with the Sassanids, and, in 365 AD, Procopius, who usurped. Apparently, Julianus had told Procopius before he invaded Persia, that if anything should happen to him he should assume the throne. When Jovianus became Emperor Procopius went underground to avoid detection till his defection in 365 AD.

Procopius quickly gained the Thracian Diocese and Asian Provinces. This gives him great economic resources which will be handy as he has Valentinian and Valens to contend with. 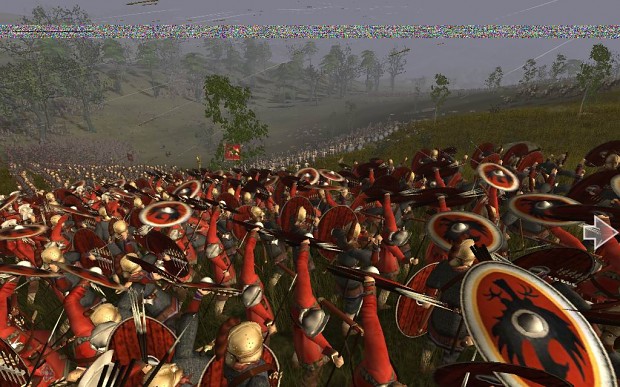 What do you think? It's a huge mod!

Also, the Romans defeated the Persians and vice versa on many occasions, right up until the end when both were more or less destroyed by the Arabs. So... you know, brush up on your history.

It's version 1.0 but in fact it's a complete release with hotfixes.

Man this mod is so sweet.
Thank you Julianus!

The only mod that brings a real challenge!

pl help!
i have an error when i start the game:

Put "-mod:SAI -show_err" (without the ") into your steam launch files, go to library, and play Barabian invasion, worked for me, had the same problem