IMPORTANT: This patch is available as an update for the launcher. Do ONLY install this, if you can't get the launcher to work. This patch fixes the indestructible Supergate bug and several minor bugs that where reported. It also changes Herak's ability to disable the weapons of several enemy ships at once and adds two new skimish maps: Play on Arcanus and deal with hostile Wraith Rebels and try to make your way alive through the perilous dangers of the Minefield map! General balancing has been improved furthermore and the resource mines now have new under construction animations.

IMPORTANT: This patch is available as an update for the launcher.
Do ONLY install this, if you can't get the launcher to work.

This patch fixes the indestructible Supergate bug and several minor bugs that where reported.
It also changes Herak's ability to disable the weapons of several enemy ships at once and adds two
new skirmish maps:
Play on Arcanus and deal with hostile Wraith Rebels and try to make your way alive through the perilous dangers of the Minefield map!
General balancing has been improved furthermore and the resource mines now have new under construction animations.

Please delete the following files before you apply the patch:

This patch applies the following changes:

Icons:
- Changed the icon for the Dart to the new model that came with patch 1.1

Effects:
- New explosion effect for the ice asteroids on the Hebridan map
- Fixed an issue with the Asgard Superlaser where the effect could be visible behind an intact shield
- New procetile for the Pegasus Cyborg ship
- Revised glow effect for the Genii Destroyer
- Altered the appearance of missiles shot by Genii ships

Goa'uld:
- Changed Herak's ability. He now drops a bomb that disables the weapon systems of all nearby ships for a short time
- Removed the vanilla sound of the barrage ability from the Artillery Hatak
- Increased health, damage, shields and projectile speed of Aris Boch and Osiris making them much more useful
- Increased shields and shield refresh of Apophis and the System Hatak
- Increased damage and regeneration time of Anubis' special ability

Wraith:
- Increased Fog of War reveal of the Scout
- Changed the Beacon ability of the Scout to reveal stealth units
- Increased damage, armor and price of the Super Hive. Also the model is slightly upscaled
- Slightly increased the move speed of the Hive and the Manta Artillery

- New Map: Escape of the Mine Field
- New Map: The Secret of Arcanus
- Fixed an issue on Hebridan (The Loop of Kon Garat) where the asteroids killed the upper mines too quickly.
Additionally, the asteroids now show a 'snowball' effect when exploding and are easier to kill. 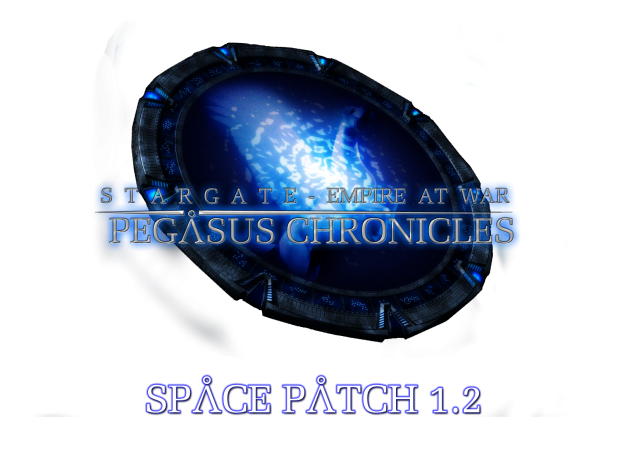 Yes a patch, what I waited years for.

Gratz on releasing a patch tho i still won't bother. Waiting for GC, skirmish just isn't my cup of tea :/

Nowhere. Atlantis will be available in a later release in some of the GCs but you can NOT build it in the current Space Skirmish release version.

Is it just me, or are the supergates missing completely ?

They are there, test for example on Talthus and Decision at the Supergate.

I know its supposed to be there but its missing for me.
I'll try installing this launcher instead of using the old one for the update.

Installing this download didn't work either. Im still missing supergates on every map.

Thanks for the info.
There seems to be a little bug on the maps from the original game. This will be fixed. In the mean time simply play the maps from the mod. (Available under Custom Maps - you can see in the preview pic which maps have a Supergate)

Well I just checked again and in my case at least, the supergates are missing on both original maps and custom maps.

I have reinstalled Forces of Corruption and the mod and it still works fine for me.

I have a question, did the patch change the A.I. controlled players at all? cause when I played decision at the supergate my hard a.i. ally didn't build hardly any ships this time. and the enemy built large fleets, which I was happy they were fighting back but it took almost an hour and 30 minutes to bet my way past their fleets and win without my ally computer actually helping me.

We didn't touch the AI in this patch.
Not sure what's the issue in your case - this shouldn't happen. Guess your ally just had a bad day or he knew you were no match for him;)

What is the problem? Doesn't the launcher start the mod?

I absolutely love this mod, but i have a problem, after i installed the update i tried opening the game and then this message came up. xml parse error - File\Data\XML\GUIDialogs.xml: file has syntax errors, see log file. if you could help me out that would be great!

Hi, can you please try to delete the file in the VANILLA Data folder, ie \o;CDirectory%\Data\Xml\

Thanks, and good luck.

thanks for the quick fix for cam not being buildable after teching up, I was starting to worried no one saw my post about it in the bugs forum.

This was actually a longtime bug that has been very hard to fix.

It turned out it was completely unrelated to the tech level itself, it was caused by other F-302s blocking Mitchell from being buildable.

I've downloaded all the patches I found untill 1.21 but my launcher still doesn't work... :'(
Can someone help me please?

How does the launcher not work? You can either let it download all the patches for you or you can use the manual installation downloads, like this one.

Do not try to mix both.

I'm lost! O_o
All I know is that when I click on the launcher nothing happens.

Thanks God I've finally understood what you were trying to say to me! :-)
It eventually works! Can't wait to play now {~^_^~}