Resident Evil 7 Teaser Demo: Beginning Hour known in Japan as BIOHAZARD 7 TEASER -BEGINNING HOUR- (バイオハザード7 ティザー ～ビギニングアワー～) is an hour-long Resident Evil 7: Biohazard teaser demo that was released 13 June 2016 for the PlayStation Network to users with PlayStation Plus memberships after the full game's announcement at E3 2016 and is set to release at a later date on other platforms.

Capcom later revealed that the teaser is a prologue, a standalone experience and won't be featured in the final game, which will feature a different protagonist than the ones in the demo and more variety in its environments and additional mechanics and features not found in the demo, such as combat with enemies and resource management and solving puzzles. It will also take place after both KITCHEN and Beginning Hour. On September 15, 2016 an update was made to the demo. This update, titled Twilight Ver., features additional rooms and items. On December 3, 2016 the final update to the demo was released. This update, titled Midnight Ver., featured even more rooms and items, and also altered the locked door to have mold on it as well as hints at something more. The demo was released on December 9 and December 19 for Xbox One and Steam, respectively. 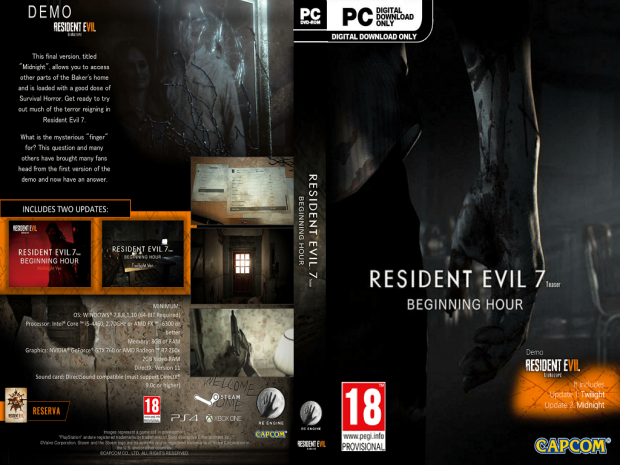