Painkiller: Lost Alpha - this is my attempt to restore the earlier version of the game times of 2002-2003. In this mod will present content from the demo version and build of the game. Content will also be restored by the screenshots and videos. In mod there will be two cut weapons (an early version of a shotgun and assault rifle [Devastator and HellGun]) with sounds, textures and shooting in the trailer. On some levels it will be different music, such as it was originally planned. Different textures and sounds cut from the final version, or left for other needs. The HUD will almost copy the HUD of the alpha version. And so on. In general, the mod for those who want to have an idea of ​​what the game was originally created to think through and People Can Fly, well, or just play a game of pseudo alpha version of the game. TranZit.

To install the mod requires Painkiller: Black Edition v1.64. This archive unpack to the root folder with the game (for example: C:\DreamCatcher\Painkiller\) with the replacement of files. Optionally, you can make backup copies of the replaced files. Then you can run the game and play modes. Have a good game!

1. Fixed position of the strip under a skull for a resolution 1152x864;
2. Fixed audio playback and reload animations when trying to shoot from the main fire HellGun at zero ammo;
3. Fixed a crash when trying to change some settings in the basic graphics settings;
4. Fixed FOV of game;
5. Fixed the lack of English language in the game;
6. Fixed a crash when using a game cheat code pkweapons.

1. On some levels was approximately recreated early gameplay;
2. Instead of a shower were added to human hearts, giving five units of health;
3. Added the early textures:
1) docker-alcoholic;
2) two boxes of grenades, mysteriously disappeared from the mod during development;
3) whiteboard with Tarot cards;
4) Sketch of level Opera;
5) the ninja of level Opera;
4. Added the monster FireSpectre, for some reason, cut from the original game, but there is in the expansion Overdose;
5. Main menu and some menu options are close to early view;
6. Added reload sounds for the Rocket Launcher;
7. The boot screen is now in build. (With a picture of the logo DreamCatcher and People Can Fly.);
8. Fixed resolution images of Tarot cards Haste I, Haste II and Haste III, now they do not know where the hell are displaced;
9. Added the early cheats;
10. Improved texture stake, it is no longer on the black defects;
11. Adjust the statistics on the Tab key, and at the entrance to the exit portal level and a play;
12. Added in menu a track called "menu", located in the folder Music, but never played;
13. Fight track of level Cathedral is now much louder and better quality;
14. The order levels on the wheel is changed. He arranged with respect to the numbering after the letter "L" at levels from Levels folder name;
15. Now Hellgun issued for all levels and with ammunition;
16. For monsters Zombie Soldier and Zombie Soldier V2 added high jumping out of the ground cut out animation; it will be played where the monster will not interfere with a low ceiling, in other cases, will be played the usual animation;
17. For some cartridges and PickableItem of Stakegun restored early rounds the number issued;
18. Fixed bug of shotgun, when his ammo was equal to -1 (minus one).

1. Fixed a bug when ammo of Shotgun exceeds the maximum limit to 100 or to 666 (if you take the corresponding Tarot card) munitions;
2. Fixed a bug in the levels Asylum, Town and Secret Lab: it was possible to shoot from HellGun and weapons of addon (except Secret Lab level) is not failing the job Tarot card;
3. Fixed the game crash when you try to change the Dynamic Light option for advanced graphics settings;
4. Fixed display HellGun's model by pressing Shift (default is a quick shot of Grenade Launcher) instead of displaying Stakegun's model;
5. Fix the position of the strip under the skull for all resolutions and sizes of the HUD;
6. Fixed crash when loading level Mine;
7. Fixed the lack of ammunition for the issuance of the first charge of Hellgun on the Town level;
8. For an alternative charge of Electrodriver restored early maximum ammo;
9. For some Tarot cards early cost exhibited;
10. Tarot cards Vitality, Health Stealer and Magic Gun exhibited early effect;
11. The Palace and Ruins levels the player will get a Tarot card, which getting planned to issue;
12. In some places restored early spelling of the text;
13. At the Loony Park level approximately recreated the early atmosphere;
14. Added early texture of monster HellBiker V4;
15. At the Swamp level added earlier version of sparks that fly from the top in the second phase of the battle with the boss Swamp Thing (when around the swamp there are large bubbles, after the shooting that appears on their place of fire), and that Swamp Thing periodically gathers and throws to the player;
16. Added yet levels with approximately recreated early gameplay;
17. Fixed a crash when using the pkperfect cheat code is not directly in the gameplay;
18. Added early speed of player and double jump;
19. Added early start video DreamCatcher.

1. Added early model of bullets for Chaingun;
2. Added cut sky on the Snowy bridge level;
3. From enemies in addition to hearts now appear gold coins;
4. Fixed defects, due to which the grenade ammunition boxes were given the same at all difficulty levels;
5. Recreated early version of Rocket Launcher's texture;
6. Added early version of ritual suicide of monster Samurai V2;
7. Added early version of the window of death;
8. Added early special effect when a player get damage;
9. Added alternative sound of reload for Shotgun;
10. Changed inversion of Chaingun's types of attacks: primary - Chaingun, alternative - Rocket Launcher;
11. Added early texture of small vampire, throwing shurikens in the player;
12. Game version updated to 0.4a;
13. Replaced color of fog by white on level Cathedral;
14. Corrected work of cheat code pkperfect;
15. Changed color of water on level City on Water;
16. Added early version of monster Bones;
17. Added cut sounds to monsters: Raven, Skull and Zombie Warlord;
18. Added cut sounds of stake;
19. Added file tweak.ini to folder (almost completely identical to the file Tweak.lua [Data/LScripts/Main]). Through it you can adjust the speed of player's movement and some other parameters regarding tweaks (by analogy with files config.ini and Cfg.lua);
20. Added early texture of monster Maso;
21. Added early version of fog on levels Train Station and Castle;
22. Fixed position of Chaingun's icons;
23. Added early version of suicide of monster HellBiker V1;
24. Added early version of quad;
25. Added early version of monster's textures: Military Base Gun, Psycho Electro, Amputee and Skeleton Soldier V1;
26. Recreated early ending battles with bosses: instead of turning into a demon appeared at the portal from the level;
27. Added early version of health;
28. Menu music is modified;
29. Stakegun's grenade equally the Hellgun's grenade;
30. HellGun began to resemble the old version;
31. Added early version of coins;
32. Added fire yellow eyes on the skull when killing a monster Zombie Warlord v1 with a Shotgun;
33. Added cut the crosshair tick;
34. Fixed bugs on the Loony Park level;
35. Fixed hot key Fire Best Custon 1: instead of assigning key Left Shift was a value None;
36. Fixed cheat code bullettime 1/0;
37. Added early special effects of shot for Rocket Launcher;
38. Fixed a bug of the HellGun: if you hold the button from the main shooting weapons and do not let go, when the ammo run out, firing animation will continue to be played;
39. At the Atrium level in the penultimate location on the top floor was added lighting frescoes;
40. Fixed not displaying a question mark in the text "Are you sure you want to quit Painkiller? People Can Fly";
41. Added cut animation of Stakegun;
42. Fixed bugs on the Military Base level.

1. Fixed sound defects of HellGun;
2. Added early weapon characteristics;
3. Fixed defects, when the eyes of the skull interface can be ignited by the murder of other monsters (not only Zombie Soldier v1);
4. Added early alternative attack of Shotgun;
5. Fixed start position of player on level Cemetery;
6. In the weapon menu a HellGun's primary charge renamed "Assault Rifle", instead of "SubMachine Gun";
7. Added a cut special effect when the destruction of stake;
8. Added monster's light when jump out from ground;
9. Added early version of armors;
10. Fixed position of low healths on some levels;
11. Fixed crash when loading level Mine (again);
12. Added early version of mights of monsters Zombie Warlord v1 and Zombie Warlord v2;
13. Changed assignment of bar under the skull: now it only appears when on location there is a boss, and this strip is an indicator of his health;
14. Eyes on the skull light up only when the monster Zombie Soldier v1 was wounded by a Shotgun;
15. Blood no longer appears from monster FireSpectre;
16. Fixes bugs on level City;
17. Fixed false issuing ammunition when pick up HellGun;
18. Added early visual special effects;
19. Added early animation of Swamp Thing;
20. Fixed a minor bug, because of which after receiving a Tarot card at such levels as Cemetery, Abandoned Factory, Ruins and The Palace, the status of receiving the card still has been written: "LOCKED";
21. Added approximately recreated an early board of Tarot cards;
22. Added early start logo;
23. Added early description of some texts.

1. Added sounds for monster FireSpectre from addon Overdose;
2. Fixed switch toggle of fire and icons of bullets for Chaingun (if you press the keys "R" and "T");
3. Changed color balance of sky of the Loony Park level, which is similar to beta version. Flames that burned in torches replaced by smoke;
4. At the Cemetery level added box with grenades, replaced alternative charge of Shotgun to a grenade, but in all levels the Shotgun still shoots ice bullets;
5. Fixed confused words "Driver" and "Electro" in configuration of weapons in the control settings.
6. Sound of disappearing bodies is reproduced;
7. Added early sounds for primary attack of SMG;
8. Game version updated to 0.6a;
9. Increased rate of alternative fire of Shotgun, disabled animation of the mechanism with freeze capsule, also, sound of primary attack is replaced by the original version with reload. (Only for level Cemetery!)
10. Removed ray from boss Giant that appeared in operating system Windows 7;
11. Returned ice bullets of Shotgun in gameplay;
12. In the weapon menu a HellGun's primary charge renamed "Hell Gun", instead of "Assault Rifle";
13. Swamp Thing's color of lights replaced by pre-release;
14. Added sounds when magazine pull out/in of HellGun;
15. Activated two previously disabled cheat codes pkweapons and pkgod. Other cheats as giveall and god 0/1 are also functional (if enter in the console);
16. Added five ammunitions for assault rifle on level Cathedral, moved a coffin from upper complex into the lower and reduced ammo of HellGun;
17. Corrected animation of HellGun: removed quivering motion when changing the magazine;
18. On level Cathedral disabled animation of magazine pull out, and enabled sound of reload of the HellGun (in the other levels animation is disabled, but reload is enabled);
19. Exclude from the arsenal a Stakegun on levels Cathedral and Orphanage;
20. Reduced ammo of rifle cartridges and grenades;
21. Restored animation of SMG's combo shot.

1. Added early tweaks;
2. On the maps DM_Unseen and DM_Sacred restored early placement of objects;
3. Returned combo shot of Electrodriver;
4. On all maps fixed position of early health;
5. Added early menu and cut settings;
6. Added early versions of barrels;
7. Added the early characteristics of the weapons;
8. Fixed idle animation of Shotgun that has been played too fast;
9. Added early window of end the match;
10. Remove from all maps pickable item of the release model of Shotgun;
11. Shotgun is now always issued;
12. Now at the entrance to the server playing the sound of start level;
13. HellGun is now always issued;
14. Now Voosh mode randomly selects all weapons, including HellGun;
15. Fixed a crash when trying to fire from HellGun. 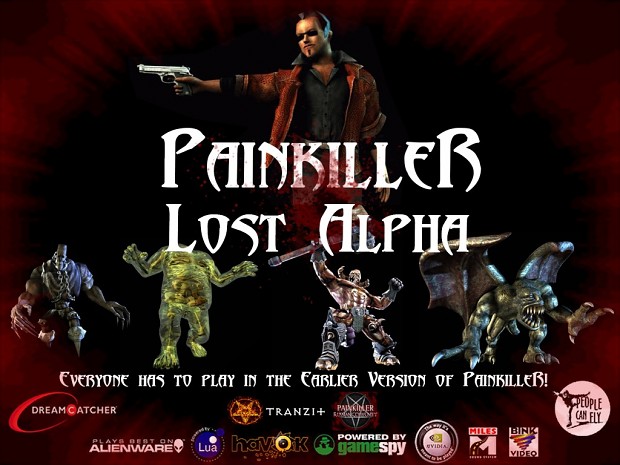