Dear fans and players of NTW3, We're glad to release the new 5.1 patch on which we have been working on for the past few months. Major Improvements to SP Campaign and to unit cards have been done . Avon, Davn, Cosak, AL42, Gironna and Uxbridge from the Lordz Modding Collective, have to be especially thanked for their work for this patch. No capital changes to MP (except Al42's major update to unit cards), some additional units here and there, fine-tuning of battle mechanics, unit stats and debugging. 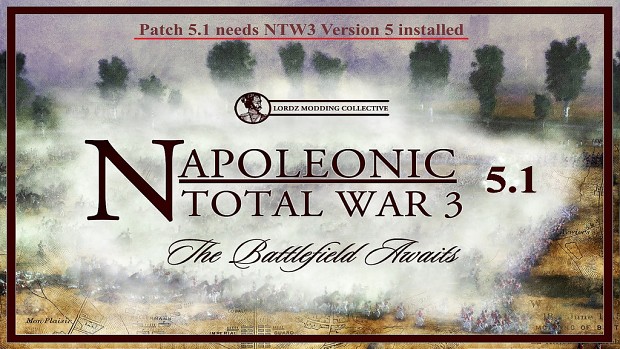 I am having an issue with this patch and its unique to me as far as i know. When i try to run the installer it doesn't start, when mousing over the folder my cursor will change to represent something is loading. In the task manager i can also see the processes are open. But even after leaving my computer and those processes open for hours the installer did not open. Do you know of any way around this issue?

You will be pleased to hear that i managed to fix the situation and everything is now working swimmingly.

Try ton uninstall and delete everything and re-install again.
If you can't even start the installation process as I have understood it from your message, try to head over to the Lordz forum for more help.

Thanks for the tip but as i said i already got it working. My friend linked me the patch page on the Total War Center and it told me some things to try to get it working and it did :)

Can you please make it an option to change the accurateness of the units in the launcher? Everything about the mod is fantastic other than the fact that units just feel too inaccurate. Yes it's realistic and some people love that. But that's why I beg for it to be made an *option* to change.

I have enjoyed many hundreds of hours with Darthmod. However, it just doesn't have the same depth of gameplay as this. For example, this has so many more units per nation than Darthmod. This is especially more fun when playing as smaller nations like Bavaria who have a great sized unit roster.
The one and only thing I don't like so much in this mod is the realistic musket accuracy in my opinion. I think it should be made as an option to have it or not.

Just one question sir. I have the previous version 5.0 do I have to delete this one b4 installing the 5.1?

Hi there, I had your mod your past version and now I have this one, yet the cavalry is very slow like in the other and they can not pass through infantry, its like they hit a wall or something. i know there was a patch made by someone else for the past version, but do you have one for this one?

yes you need it its write on the picture :)

Whenever I try to download this mod it doesn't download as a Exe file, can anyone help?

the older version of your mods.. reach like 25-30% and the installiation its crashes.. or stop working they say.. do you know what the issue is ? would relly test out the new patch so :P

I'd like to know why did u change the french shakos by the french bicorns during the pass from the 4.0 version to the 5.0 one. It's obviously accurate from the 1805-1807, but from there onwards, the french army used the french shako in most of its units. This takes me to another point: does the bicorn evolve to the shako in any point of the campaign or it stays still? (I've not played enough to ur mod, which I think is fantastic, to determinate it myself).

Thanks for ur attention.

I wonder this too

I have the past version of this mod, that is the one b4 this update, I love this mod, but I don't see instructions for this one?

Are historical battles only multiplayer? If not, I must be doing something wrong because I can't find battle I choose after game launches?

no they can be played vs AI

Is there something special I need to do when choosing historical battles? I can select a battle on Lordz desktop menu but when I launch game itself, nothing. Where/how do I find my selection?

You need to go in multiplayer and host a game, from there you can find the historical battle which you have chosen in the launcher and will be able to add AI players.

should i delete the previus version

Have you reversed the Spanish uniforms around from SP to MP? It's a minor quibble, but it just seems odd to me that you get the late era Spanish uniforms in SP and early era in multi when all the other factions are the other way around? Also, any chance of seeing the early era Prussian uniforms at all?

anyone out there wanna play message at frank underwood on steam

Love this mod, thanks :)

The error that I am having is that the campaigns never save.

thia is also a problem with recruiting men

My Game seems to be crashing whenever two full armies battle halfway through the battle itself.

Can someone explain to me just exactly what this mod does. Its main features, Also is it compatible with Darthmod?

When I install the patch, only one row fires, but without the patch it works fine. Is there any way I can fix this?