Nezeramontias is primarily a game enhancement mod. Search around the Diablo 2 © modding community, and you'll find mods of various types. Some like to alter the core of the gameplay while others offer mostly cosmetic changes. But some mods offer a bit of everything, and that's what I strive for with the Nezeramontias mod. Much of the game will remain familiar; this mod makes no changes to the story, any of its characters, or any of the dialogue. Furthermore, all current monsters items, skills, and most everything else from the base game are still here (though many with modifications). Instead, what you'll largely find are a number of additions to the existing game. Some major changes like a restructuring of the skill system will force you to rethink how you go about building characters, new equipment, new items, new skills, new inventory images, a larger character stash, many new cube recipes, new monsters, expanded levels, a revamped money system (i.e. it's actually useful ;-)

"He who fights monsters should see to it that he himself does not become a monster. And if you gaze for long into an abyss, the abyss gazes also into you."

This mod only works with version 1.10 of the expansion. If you try it with 1.11, you will experience
problems, and the game will crash when you attempt to enter Act 5.

Language: Nezeramontias is written for the English version of Diablo 2. If you're running
Diablo 2 in a different language and install this mod, your game will play in English.

If you're using a mod manager, you should follow the instructions included with that application for adding
and later removing Nezeramontias. In such a case, you probably won't need the install and uninstall files
included with this download, so you can skip the 'Mod Installation' section below. The file nez109.mpq
contains all the additions/changes made in Nezeramontias.

Install Note: If you currently have a previous version of Nezeramontias installed, it's best to
uninstall that version before installing the new one.

Simply unzip the file nez109.mpq into your Diablo 2 game folder.
Next, find the file Patch_D2.mpq. Rename it or move it to a backup folder. Then rename
nez109.mpq to Patch_D2.mpq. And you're good to go :)

The file new uniques.txt contains a list of all the added uniques in the mod. It's a semi-spoiler,
so don't look at it if you don't want to know about them. It lists the name of the unique,
what type of item it is, its item level and the level required to equip it.
If the name and the type are the same, the item is unique only and is created with the cube.

There is also a new sets.txt which lists all set items.

Hirelingskills.txt lists the skills of each hireling and what level they aquire their skills

Note about additional mod files: The other files that come with this mod (newuniques.txt,
cube recipes.txt, etc.) are easier to read if you open them in a spreadsheet editor such as
MS Works Spreadsheet, Excel, or the D2Excel editor.

Thanks: - meamkimchi and yukoahso for all the new exclusive inventory pics (and there are a lot of them :)
-meamkimchi, yukoahso & Makachor for all the created/converted skill pics.
-Fusman for making his inventory pics publicly available.
-Digibo for converting all the Diablo 1 inventory pics for us.
-Phalzyr for creating the new stash, cube, and inventory and making those publicly available
-Mandzo for his new set suggestion
-Nefarious for the runes.txt plug-in
-Onyx for the plugin for The Claw viper Temple and Andariel's Lair.
-Lord Drekas for the Duriel level plug-in.
-the Diabolic Cartography site for new level plugins.
-SVR for the discovery and post on removing gems with a cube recipe and on discovering the kill counter.
-Riparious, Shadowtalon, Joel, Jbouley, Om, Stargazer, Kyrene, taarna23, Volf, Jack Nipper,
Fishynsmelly, Kraj & Untamed for their inventory packs.
-Paul Simary for an excellent map editor (graphic D2 map editor rocks!), and his anim_data tool
-Iswelo for D2 modding's original map editor and his D2Excel editor.
-Joel for the TXTDC6 editor, the Graveyard plugin, and that post of cube recipe op codes that makes the
new mystery chests possible :)
-JBouley for his "Naming Idea" list at Phrozenkeep
-Aurelianus for his naming suggestions
-mouse for the tutorial on spawning items from corpses
-onyx, Incandescent One, Har'lea'quinn , Alkalund, Kingpin, I_Only_Pressed_Esc Mouse, Phrozenheart, Sardius,
I_Burner, Reiyo_oki, Haujobb, Darque, and Joel for those nice new monster animations
-The Infinitum site for the converted monsters.
-The Diabolic Cartography for their level replacement plug-ins.
-Chaos|Depression, Bruder, SAor CRidhe, AOLSucks, freykin, MrPopoGod, LordOfTheWastes, Montreal, Malachai,
cowsflying, retroboy, and Aurelianus for their new runeword suggestions.
-ahteck and Dainbramaged for the names of the new Barbarian throwing axes.
-Retroboy, Inkspot, Gonbow, and Emperor_oberon for the names of some of the new equipment.
-Phrozenheart for all his submitted uniques.
-Emperor Oberon for submitting an install for Mac OSX computers
-I_Only_Pressed_Esc for the publicly available spell overlays.
-Red Havoc for the publicly available missle recoloring pack.
-erk for giving me a place to put a webpage for this mod.
-Everyone who has played this mod and provided suggestions and bug reports.
-And of course thanks to everyone at the Phrozenkeep forums for all their help,
knowledge, and general ability to figure out cool stuff :) 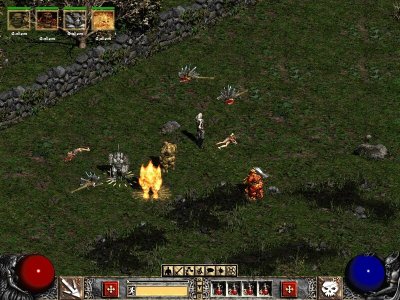