Need for Speed: Underground (NFSU or NFSUG) is the seventh racing game in the Need for Speed video game series developed by EA Black Box and published by Electronic Arts in 2003. It was the first Need for Speed game to be released in Japan since Need for Speed: High Stakes. Underground is a complete reboot for the series featuring a heavy emphasis on tuner culture and a storyline-driven career mode. All races take place in a generic city at night. Rather than exotic cars, Underground featured vehicles associated with the import scene. Underground was commercially successful, and inspired a sequel.

The player starts straight into the action, at a circuit race driving a uniquely styled Acura Integra Type R with wide body kit, easily winning over his opponents, only to be woken up by Samantha from his daydreaming.
Samantha is the player's friend in the new country; she shows the
player how the console with the races works, who's who, and makes fun of
the player's car, and introduces him to the racing scene in Olympic
City, a huge coastline city. Eddie (and his orange-metallic Nissan Skyline R34),
is the leader of the Eastsiders and current top racer of the streets of
Olympic, and Melissa, also one of the pro racers, is his girlfriend.
Samantha helps him get a first car and the player starts to proceed in
the racing world.
Time passes, races are won. The player meets other racers, and
eventually Samantha does the same from time to time, offering unique
visual modifications instead.
The player's successive victories don't impress Eddie. First, he
mocks the player's skill, saying he has a long way to go to 'roll his
streets'. Later in the game, the player builds enough hype to be too
hard to ignore, so Eddie challenges him to beat Samantha in a sprint
race before coming after him; the player's willingness in going for it
infuriates her. Samantha totals her Civic's
engine trying to beat the player, unsuccessfully. TJ takes the junked
car for himself after the event, and Samantha, sad and furious about
this, distances herself from the player.
When the player comes close to reaching #1 in all kinds of races,
Eddie tries to once again get rid of his rival. Around the same time,
the Player sees TJ in Samantha's recovered car, now working again, but
has been vandalized. Both run a circuit race worth the other's vehicle,
which the player wins. The player returns the car to Samantha to make
amends, and she gives the player a choice of a wide body kit for his car.
Right after the touching moment, Eddie challenges the player and
loses, like everyone else who ever challenged the player so far. Before
any victory can be sung, a mysterious, legendary silver Nissan 350Z
challenges the player for a last run through the Market Street circuit.
A challenger who, after being beaten by the player, is revealed to be
Eddie's girlfriend, Melissa.
That event solidifies the player's status as the new best underground racer in the city. 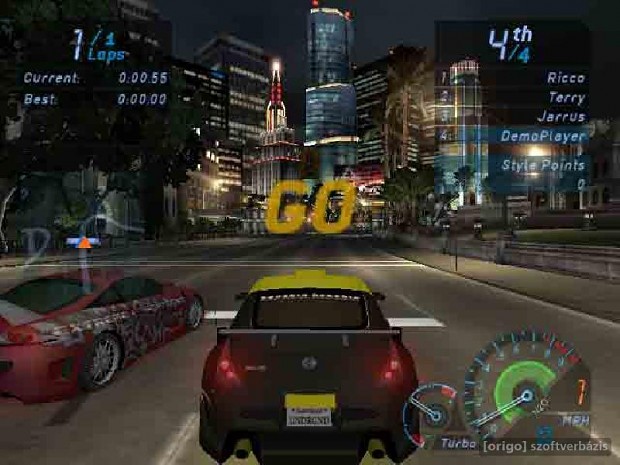