The Korean War (1950–1953) was a military conflict between the Republic of Korea, supported by the United Nations, and the Democratic People's Republic of Korea and People's Republic of China (PRC), with air support from the Soviet Union. The war began on 25 June 1950 and an armistice was signed on 27 July 1953. The war was a result of the political division of Korea by agreement of the victorious Allies at the conclusion of the Pacific War. The Korean peninsula had been ruled by Japan from 1910 until the end of World War II. In 1945, following the surrender of Japan, American administrators divided the peninsula along the 38th Parallel, with United States troops occupying the southern part and Soviet troops occupying the northern part.Note,please delete the file "map.pak" before playing the game. 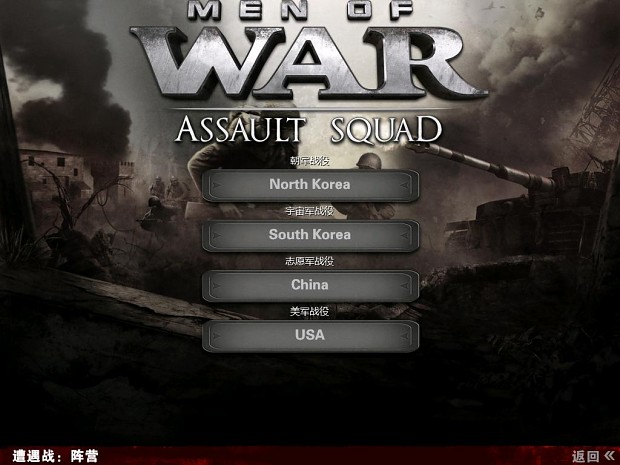 dude your far behind

cause hes a pirate probably.

What hint is it?

Sorry, what? If you mean by why I think it's incompatible, it's because of the errors I get when I try to play it.

me to i also try that errors when I start the campaign in 1.81.1

dos it work with men of war

what a bunch of crap - cant even download the game - says bad gateway... forget it...

Does this only work for Assault Squad? :o

Does not seem to work with newer version

this sounds good, i hope you get it work with the up to date patch so we can all play your mod.

how to use this mod?????? can some one teaches me to do it in the men of war assault squad

What version do you have? as in disk or steam?

the chinese guy says its for 1.81 :DDDD Good for Pirates >:D

This mod need to be installed on this game Men of War:Brothers in Аrms !?
S009.radikal.ru

I hope it's in English aswell.

its crash when i turn on the mod