ADDED SHIFTER MINIGUN FIX The first release in a series of miniprojects I'm finally making public, under the series name "Markistan: The Missing Files" or MTMF, for short. In this mini-mod or rather, kind of play thing, you command a suit of state-of-the-art power armor and can take it touring through any of your favorite mods (except 2027, only exception) in a high-octane, explosion filled action fest; best played on higher difficulties. This series is are several mini-projects I've pursued privately, during the large gaps in my developmental history, such as between Neighborhood3 and DSTM, or DSTNM and Hatchet and so forth. Note this is no longer related to markistan in any way shape or form, but I've gotten into the habit of using MS in front of most mod names and these have contributed by "what I've learned" from them kind of basis, and they're fun to play. I may box up some Borderlands and other stuff kind of mini projects as well soon, so we'll see. Enjoy.

The first release in a series of miniprojects I'm finally making public, under the series name "Markistan: The Missing Files" or MTMF, for short.
In this mini-mod or rather, kind of play thing, you command a suit of state-of-the-art power armor and can take it touring through any of your favorite mods (except 2027, only exception) in a high-octane, explosion filled action fest; best played on higher difficulties.
This series is are several mini-projects I've pursued privately, during the large gaps in my developmental history, such as between Neighborhood3 and DSTM, or DSTNM and Hatchet and so forth.
Note this is no longer related to markistan in any way shape or form, but I've gotten into the habit of using MS in front of most mod names and these have contributed by "what I've learned" from them kind of basis, and they're fun to play. I may box up some Borderlands and other stuff kind of mini projects as well soon, so we'll see. Enjoy.

Patch Notes for v1.1:
-Fixed typos and text things in part descriptions.
-Nerfed stun missile damage to about 1/4 of previous. These things are still plenty powerful, just not monstrously OP.
-Fixed a bug with jumping with shield mode on. I use thrust on jump key so this went undetected during beta testing.
-Upgrades to weapons now update the damage in the info window accordingly, but this is really tiny in all honesty. Also, claymores now display 75 damage instead of 0, though their damage is incredibly variable as they fire multiple traces in a 90 degree cone.

Patches Notes for v1.2:
-Added minigun fix for a spinup bug in shifter/biomod. Turns out they don't use TraceFire, but instead a new function named "DoTraceFire". Devs were nice enough to leave TraceFire in place for compatibility, but it isn't called, hence preventing minigun spinup. Now you can type "Mutate Shifter" into the console after summoning the suit to enable minigun spinup fix mode. Only one application is necessary per set of weapons.

PATCH NOTES V1.3:
-Made machine guns more accurate after upgrades. They are now much more competetive as a general use weapon.
-Nerfed max fire rate on tranquilizer carbine by 0.05 seconds between shots (0.15 vs 0.1)
-Halved the fire rate bonus on tranq carbine from upgrades. (0.3 to 0.15)
-Made tranq carbine base fire rate higher by 0.1 seconds (0.4 to 0.3)
-Buffed hydra rocket damage. They just were not competetive compared to higher caliber weapons.
-Buffed Railgun blast radius to be less sensitive.
-Debugged UX438 warhead. Would leave some enemies as a "ghost" as well as not properly restoring properties in the event of multi-collision. Additionally, anything it hit weighing 0 mass could run math that divided by 0 and then affected damage. These should ALL be fixed.
-Added Altfire Scope support, for when togglescope is disabled by a mod. For instance, hardcore mod disabled the ability to use scope on railgun/sniper modes, but now altfire scopes anyways to subsitute.
-Looked into bugs related to shields not working on some mods. Evidence inconclusive; I really have no idea what's going on... and that's saying something with the 6 years over of experience I have modding for DX, specializing in code.

v1.3F Notes: Fixed scope FOR REAL in hardcore mod. Uploaded patch prematurely. Had tested everything EXCEPT scope in hardcore mod. Turns out that's a really weird franking deal with how it read the weapon. Added a check for being in state "idle", which the weapon could never assume due to lack of first person animations. Ugh. Anyways... this is now fixed FOR REAL. Short of added content, this is likely the last patch I should ever have to make. Hopefully.
Thanks for your patience, I'm kinda renound for jumping the gun in a complete routine of debugging. 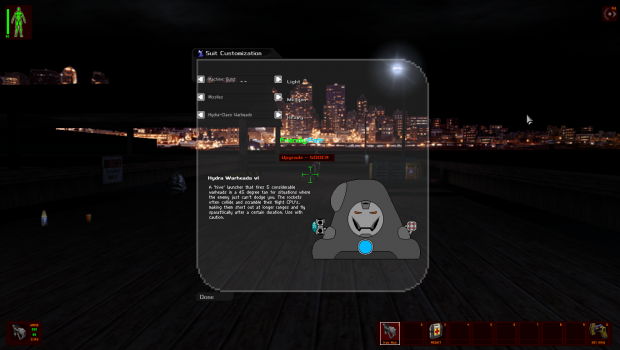 Binds do not seem to work whatever I do.
Iam using BioMod combined with Modern(ish) Combat.
Iam sure the probleme is on my side, though.

The weapons are really awesome.

I want to mention when I do "Mutate IronShield" in console, my character seems to do super-jumps which are so high, that the fall damage gibs JC.

Okay, so I found out the user.ini that my game uses is actually under "my documents" while the one in the system/game folder just gets plain ignored. Sorry for inconvenience.

Minigun doesn't seem to work right, thought. And the auto shotgun seems to have level 3 stats all the time regardless of upgrades (in speed, at least).

Wow. Feedback-splosion. Come to think of it I think the shield mod temporarily ups jump height to cushion fall damage... this should probably be patched since thrusters do things better. Glad to see you worked out .ini issues, because I know the setup is very confusing for those who haven't worked with this technical jargon before. And the auto shotgun does have proper stats as far I can tell. I cite the code (Which is not protected, feel free to analyze and learn from it or whatever floats your fancy)

Seeing how the values for shotgun fire rate bonus range from 0 to 0.05, the shotgun has its between shot time decreased by as much as 25%, or roughly 33% faster. It doesn't get crazy fast like say the minigun, but the change is there.

Thanks for taking the time to give some feedback! Hope you have fun with this. The jump thing, a typo I found in the stun missiles description, and possibly the hitdamage not updating in the info window (but it DOES upgrade that actual damage done while firing) might be grounds for a patch, but I'd like to prevent patching where possible since this is miniature and otherwise pretty acceptable, aside from the confusing setup.

Uploaded said patch with some various concerns in it. Your feedback was incredibly helpful.

Another followup. Forgot about the minigun tidbit you reported and/or assumed it was in a similar vein to the auto shotgun stats disbelief, but checked it out just a minute ago, and the minigun doesn't spinup in Biomod/Shifter. I added a fix for this in v1.2 and now you can type "mutate shifter" on your save to fix it. You'll get a message and it should be resolved wonderfully. Thanks again for the report!

Oh for frank's sake. Got locked out of editing previous comment the moment I posted it. Y U DO DIS. Anyways, I'm here one last time to report that the armor system and shield do not in Shifter it appears. Not sure why, but it seems they removed the call for mutators to intercept damage being applied in a game, particularly for single player I suppose. Didn't look at their code, but either way it's out of my hands completely and I simply have no other way to make it intercept damage for the mod, so that's going to have to stay like that for better or worse. Sorry.

I played a bit more around with the mod now.

I want to correct myself about the auto shotgun.
After all, I think the light guns are just bit unbalanced.
I at first thought something was wrong with the auto-shotty, but testing the upgrades, I just realize the speed of that thing is overpowered compared to the (level 1) machine gun.

Since armor is broken in shifter, I keep having trouble killing human targets since light guns do so low damage combined with terrible accuracy on medium-range.

Since I couldn't test the minigun yet, I often fought with the double barrel MG and I really think the accuracy is just not good enough. I of course tried the minigun in it's broken state and I found it confusing to have seemingly better accuracy than the MG.

Oh, and thanks for fixes.

Light weapons are generally very specialized in what they're good at, and some of them are kind of meant for suppressive fire, and most (except the shotguns I believe) get a moderate accuracy bonus from upgrades in addition to damage and fire rate. The minigun is kind of a all-range vs groups weapon (it's deadliest at close range, but its monstrous rate of fire can make it effective at almost any range, given enough focus), the MG is kinda like the assault gun, it's meant for use at close range in panic situations, but if focused can be used to fight larger groups of enemies. Auto shotty is by far one of the deadliest, but is very ineffective at longer ranges and goes through its magazine the quickest, nonetheless, it is incredibly deadly at close quarters. The masterkey is of course for breaching doors, but its damage is very high so it can also be used for Run n Gun combined with sprint mode, or sneak attacks in some cases. The tranquilizer carbine definitely needs more upgrades to be general use, but otherwise works well as a close quarters stealth weapon. At higher levels, it can be used almost in place of MG or some others, but its relatively higher accuracy, suppressor, and tranquilizer over time make it key for close quarters silent takedowns, for which it is incredibly effective, being a 100% silent weapon. Medium weapons are of course more powerful than light weapons, and special weapons above medium. The MG's main strength I'd like to emphasize is that it can have good accuracy when focused and has very high damage per shot, especially at higher levels, and even more when compared to the minigun.