On November 9, 1989, The Berlin Wall fell and Germany was finally reunited. A wave of democratization swept through Eastern Europe, and on December 26, 1991, the Union of Soviet Socialist Republics was extinguished and, from its ashes, a number of countries were born. These major events in human history define what we call as the Modern Era and a New World Order is rising with the United States at the forefront. How will you lead your nation to glory? Will you try to re-establish communism, or will you extinguish it once and for all, spreading democracy to the far corners of the world?

7) Iraq is a Secondary Power now.

9) Iraqi Kurdistan is a substate of Iraq, now.

11) Added investment of the U.S to some countries, so that the U.S will try to get there more influence, now (For example, Ukraine.). 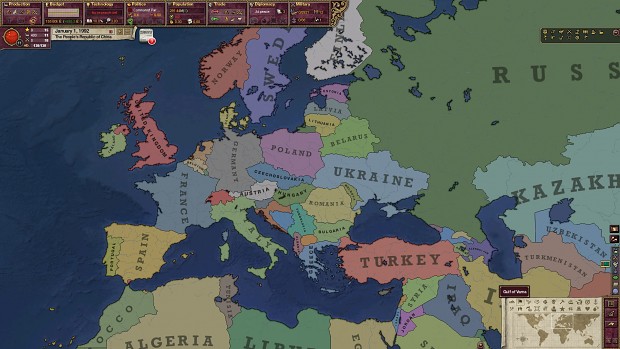 Try to clean the cache.

I re-installed the file

And yes, you need 3.04 and Hearts of Darkness DLC to start the mod.

Re-added rar to the Moddb.

It says "Archive is damaged. Couldn't open file." how can I solve this?

I will solve it.