Basically I made this for a friend to show him how the jets drop the bombs and choppers landing dropping off men and taking back off coding. Just so he can see the coding in the editor to make this own battles. If anyone wants to use this for there own battles or a video more then welcome. Its a 15min battle in the editor.The US try's to stop vietcong from attacking then they get over run by them and need to call in air support to save the day I tryed to make the battle as real as it would of been like back then. Put the folder jungle_road into ?:\program files (x86)\men of war Vietnam\resource\map\multi paste it straight in there. Then load up the editor (if u don't have it download it from this site under mods\men of war Vietnam\editor) Press F3 then Esc load\multi\jungle_road\Men of war Vietnam guide. Then just hit Start and watch the battle fold out. Press Ctrl+shift+alt+D to kill off the HUD display, this good to make videos with. Before battle press 0 to gain more FPS. 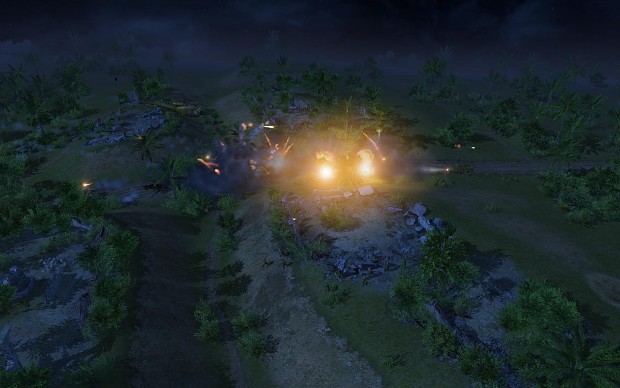 does not work tried

What I hate the most on it, is that finally there is a airstrike tutorial for mow vietnam and then it doesnt work. -_-.
I gone to the resource map folder but there was no such "Multi" folder in it only single and my own maps.
I created a "Multi" folder and put it inside there but it didnt work there was no landscape file, when I tried to load the mission file it just crashes on parsing files.
Same with outside of the multi folder.

Well,i have a question how to take off the helicopter from land and how to turn it left or right when in air

**** this sites moderators. why delete gem editor and crucial downloads just because they become part of the game not everyone can update

I played with it a bit and it was alright. Pretty useful. If you tried downloading this and it didn't work that means you didn't download it correctly! It even has instructions in the description! I think you need the Special Edition DLC for this tutorial to work.