Mass Effect Updated/Improved Textures Mod (TexMod free version) This is the latest version of the mod, it is a direct install, extract ALL 7 parts into the same location of your choosing and run the ME1UITM.exe and follow prompted instructions. Make sure to direct the install to your MassEffect folder. You may have to re-setup your graphics settings and .ini tweaks after install, this only needs to be done once. To further improve shadows clear your shader cache using MassEffectConfig.exe, the mod installs some tweaks to the actual shaders and will now render shadows more similarly to ME2. Most of all...Enjoy

06/02/14:
-Fixed crash on Altahe when exiting facility, crash was due to incomplete/corrupt Rachni texture
install.

-Fixed Feros and other crashes due to Gethtranport ship texture being too large.
Mod has been tested on every planet, every elevator, and every main "boss encounter"
no crashes found during testing :)

-N7 armors and human faces have full mips so no more shimmer (note this will cause low lod in the
character create menu just get through the menu and the armors and faces will look normal in
game, there is currently no fix except for removing mips which causes shimmer
-Splash screen will now fit 720p displays and not be oversized
-Many many cosmetic fixes on NPC clothings, drop shadows, misalignments, etc...
-Anderson seam on face in certain lighting
-Human teeth have been straightened and whitened a bit
-"GI Jane" hair style restored if you liked the bald "Jack" version it will be available via .mod or .tpf

Please report any issues and I'll work them out best I can.

Thanks for using the mod :), 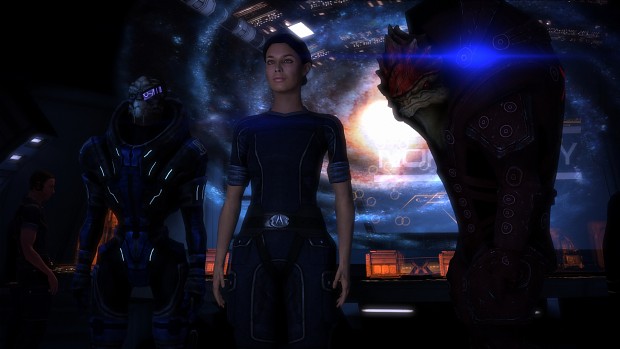