Escape and then again force entry into Polaris during the early hours of the NTF Rebellion to rescue GTVA loyalists of 6th Fleet. From the very beginning of the Rebellion to its ultimate height, the GTD Master, the GTCv Actium, its sistership, the GTCv Lysander and their crews engage the NTF in several dangerous missions. This release is voice acted and features rebalanced flight mechanics and functional cockpits.

The upgrade of Lightning Marshall (and because it's fitting so well thematically, I have also reworked and included Operation: Savior once more) is finally finished. While working on the campaigns I got carried away a bit, and more or less started over (blame Diaspora!), so this revamp turned out to be not a "normal" campaign upgrade, but rather something you might want to think of as a reboot.

This package does include:
- 6 campaigns with a total of 30 fully voice acted and thoroughly balanced missions
- Fully working cockpits for all fighters based on the generic Terran cockpit model
- Completely rebalanced ships and weapons
- Semi realistic flight model for fighters (Battlestar Galactica like)
- Cap ship battles - a lot of them

FSO version 3_6_18 or higher and the latest MediaVP release required
After decompression select Lightning Marshal as the active mod in the launcher of your choice, and you are done
DISABLE BALLISTIC AMMO GAUGE AND ENVIRONMENT MAPS IN THE LAUNCHER; THEY CAUSE MINOR PROBLEMS WITH THE COCKPITS!

IF YOU ARE HAVING TROUBLE WITH THE HUD:
remove the cockpits-hdg.tbm and Cockpits-shp.tbm files to disable the cockpits or play on a different resolution

Known bugs:
There are some minor problems with the cockpits with the display of the Katana in the weapons gauge and the target view's subsystems brackets

I'd like to thank all the people whose work has been used to get this released. As it is, there probably are very few modders on the HLP whose work hasn't been used in one way or another, be it coding, modeling/textures or inspiration.
Special thanks to Darkblade and biofaust, who helped with the voice acting, and all the people who created the original campaigns in the first place, you are the best. 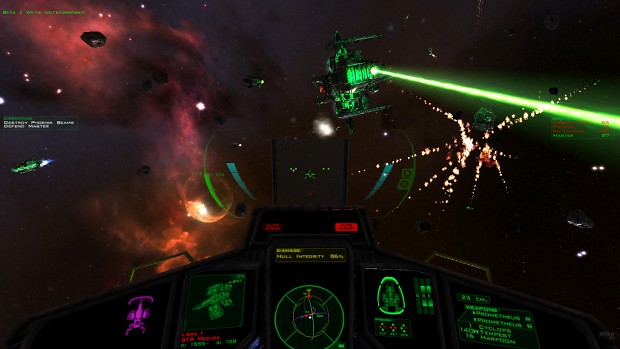