Resident Evil 3(1999) Overhaul MOD "The Lord of the Necropolis" is a major expansion of Classic RE3. In Ver.1.1, the new ending that I gave up implementation in Ver.1.0 due to lack of my technical ability and time is added. Many other changes have been added, such as expansion of police station, a new route after jumping off the cable car, merchants and so on. The game balance has been adjusted so that more Resident Evil fans will be able to enjoy the MOD. The new skill "tackle" and the new shooting objects "generator"and "flour bags" will be very useful in the early stages. I hope a lot of RE fans can remember the fear and sense of accomplishment when they first played the classic series of Resident Evil. 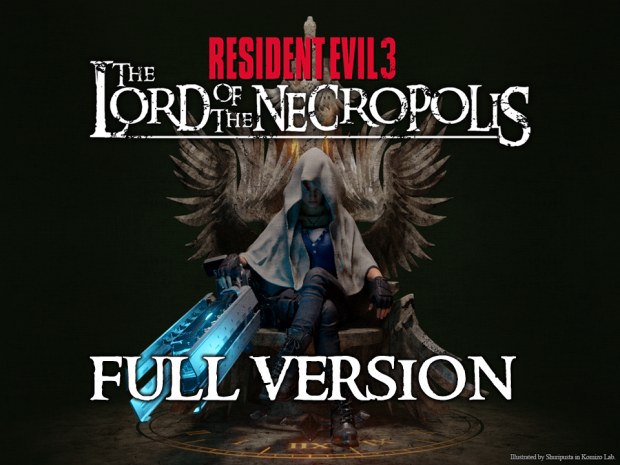 Hooray! Its finally out, congrats to all people involved! gonna try this one out

quick question komizo, i see the instructions say delete such and such and move the folder to your install folder. but its running straight out of the zip file. is there something missing when you play it straight from the zip folder, should i be fine with this or should i move it to my biohazard 3 install?

The movies won't be played.

thanks for the reply!

How do I translate it to English, there’s a patch somewhere?

You can download the preliminary English patch below.
Mediafire.com
English translation of version 1.0.0 is just a first aid measure. It has various bugs, but it does not affect the progress of the game. I will try English translation in another way in the next update. It will release few weeks later.

ehi komizo, can u give us a link that able to download the sourcenext version? because i can't find one...... thanks

I have no idea. I have my own Disc.

Excellent work for everyone who participated in this project, my sincere congratulations. It looks amazing. I only have one question. It will be available in other languages such as Spanish, English, etc.

For now, I'm only planning an English translation. I'm sorry.

Amazing mod Komizo, i spent a lot of hours playing it, needed to take a little break now, it's quite hard even after ''activating'' easy mode ;) hehe. Good job on Nemesis, you made him a true nightmare, he is so hard and aggressive that even those evade moves (step back/side rolls) don't help against him, i rage quit it but i still enjoyed it believe it or not. By the way, i noticed Jill's yawning reaction haha, how about instead of that you give Jill feature just like in OG RE3, the one where she can push back a zombie with that elbow tackle at a specific moment when zombie gets too close (good reflex needed), what do you say? We already have back step/side rolls with 'Change target' button + back, left/right, so for this move it could easily be 'Change target' + forward when zombie gets in range. Again, you did outstanding work, keep it up. Cheers. :)

I may make improvements to the added actions. But I'm afraid it will break the game balance. I will be careful.

Ohh i see, well in that case maybe it's better not to mess with it, it's totaly your call anyway. As for balance, the only thing that would lead to perfect balance of the game is to tune down Nemesis in prety much all aspects, in speed, aggressiveness and health, maybe it's even better to give him his original RE3 characteristics but make the encounters with him more often, makes less drops to no drops after you kill him, make him have infinite rockets when wielding his rocket launcher, and keep him hooded of course since he kind of looks more scary ( to me at least) with hood over his head. I mean, DAMNNNNN he totaly breaks the experience of the mod at the moment with his current abilities. I could swear that even Origins of Species on HARD difficulty is a joke comparing to Lord of the Necropolis on EASY difficulty precisely because of Nemesis. Cheers friend! :D

Adding new actions is difficult, but I plan to weaken Nemesis soon. Currently, especially the easy mode balance adjustment is not enough. I continue to insist that players should not fight Nemesis early in the game. With Nemesis alone, it's easy to get away from him. However, zombies get in the way and the players die. A player's escape route should be prepared. Thank you for your advice on the strength of Nemesis.

How to activate Easy Mod?

Examine the statue of the goddess in the back alley where you first met Dario.

Hello mod creator, when the game starts I enter the first door and the game crashes, how to fix it?

Do you start the game with "The Lord of the Necropolis_1_0_0.exe"? If that doesn't work, try reinstalling.

does disabled Japanese have any differences? because I noticed that it can be done, the only thing that for now I found the game menu different.

thx man ur the best

It's such an amazing mod, I thoroughly enjoyed my time. It's like playing the original game for the first time all over again. Thank Komizo and everyone involved, well done!!

Amazing work as always brothaa !!! Super interesting mod !!! And your level design is in another level !!!

Hi, I´ve just finished the game on hard mode, thank you so much for amazing job !!! So I have some questions, when I finished ,Jill has escaped from RC ,but I´ve seen that for some streamers Carlos is dying and Jill can´t go out from RC. It depends at what? What should I do to get good ending? So next one is, when I open all epilogues, it´ll appear infinite ammo or something else?
I think that this mod is the best, thank you!!!! You´ve done some kind of remake for original re3, is that what Capcom should´ve done !!!!

It depends on the number of Nemesis defeats. So far, nothing can be gained by acquiring all the epilogues.

yes! been waiting for this. look forward to giving it a good play. you are the best modder of RE in my opinion.

hi komizo i have a problem trying to run the game. I have copied all files successfully to my biohazard 3 and replaced necessary files when prompted. I start a new game via the overhaul option. the first video plays, then it says "farewell to my life farewell to my home" as normal, but then just crashes and closes down with no error message. Do you know what is wrong?

Please confirm if you are running "The Lord of the Necropolis_1_0_1.exe"

Hi. Yes starTed every time using the loRd of 1 0 1 as instructed. There is Another thing as well. Sometimes the game starts with the new mod menu screens, backgrounds etc, and sometimes it starts with the standard re3 backgrounds and menu screens. It's strange. Deleting the configuration file and running as administrator are 2 things I have tried which gave me the correct screens once or twice, but it's inconsistent. Whatever I try though, it still always crashes after saying "farewell to my life, farewell to my home". I have even uninstalled and reinstalled everything again from scratch (sourcenext re3 and the mod files) error still persists. (This comment is from me w20adm20 by the way. I'm just not logged in on this device I'm using right now)

Please change the installation location and reinstall. If that doesn't work, I have no idea.

right ok this is strange. So I tried to download from another mirror to try another way to get it to work and noticed the new download was version 1_0_2. the version it downloaded 2 days ago when i did it first time was called version 1_0_1.

the new download (version 1_0_2) seems to be working fine, I just have 1 question. There seems to be only rofs 1, 6, 11 and 15 dat files on the new version 1_0_2 download, Will this cause performance problems or crashing halfway through the game? or is there supposed to be only those 4 rof dat files?

That's normal. Other files are uncompressed.

Ok. So it seems my old download had a faulty .exe, new one works fine thank you.

Can this Jill`s skin be transferred to the classic version of the game?

Thank you Komizo, this is now my favorite resident evil 3 mod! amazing job!

Hi, i followed the instructions for installation but when i start OVERHAUL i see a empty street without jill or anything. Any idea ?
Thanks

How do I disable auto-aiming in the game?

I don't know. My patch doesn't affect the save data.