IDF-Fight For Independence™: V0.1 September 29h, 2013. IDF: Fight for Independence is a total conversion modification for the game "Battlefield 2". The mod featuring the conflict between israel and surrounding Arab countries in years 1967-1973. include this wars: - The Six Day War - War of Attrition - The Yom Kippur War This version focuses on the Six Day War.

FAQ's:First all, make sure you have the last Battlefield 2 patch installed (v1.50).
Q: How to install the mod?
A: Put the IDF folder inX:\Battlefield 2\mods\

Q: There are many bugs and glitches!
A: You will likely encounter some bugs and glitches in this modification,Most of them will be in the light weapons department that are currently still has a lot of problems, like animations and sounds,We invite you to help and post the problems you found, here:https://www.moddb.com/mods/idf-fight-for-independence/forum/board/bug-report

Q: Why i cant fly the Helicopters easily!?
A: First - All helicopters require a "WARM UP" period. You cannot just jump into an helicopter and immediately take off.You MUST wait approximately 25 seconds before you try and lift off. If you try and lift off earlier than this, you will experience some disastorous results.You will know when the helicopter is ready to fly - The sound of the engine and that of the rotor blades will reward your ears with the welcomed - "Whomp, Whomp", telling you the engine is on speed and ready to go.At this time, you may lift off and proceed on your way. Once airborne, you will find that the helicopters fly very nicely.

Q: Why there is only re-make maps?
A: Since we do not have map creator in our team, you are welcome to join the team & help! 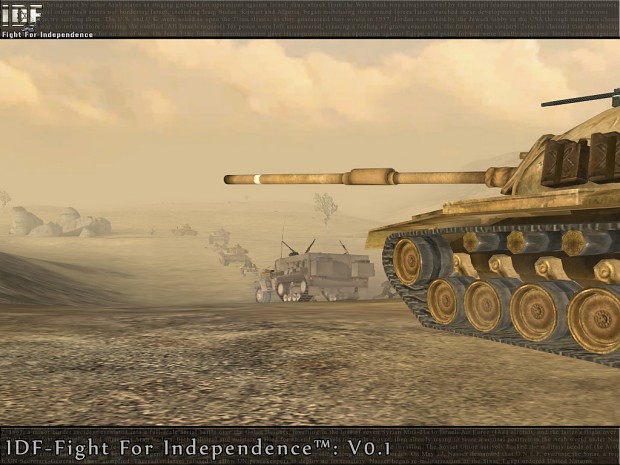 Wow sweeeeet! and just when i thought i didn't have anything to do tonight :)

GODS BE PRAISED THEY FINALLY MADE A BETA!

Great that i don't have any trouble with downloading, like someone else. Finally they release beta, i will start this mod in debug mode and fix troubles if necessary :-)

after playing one map, when i try to play ather map it crasehs

I've put IDF folder in \BFINSTALLATIONFOLDER|MODS, and what then? how to launch it?

there should be a shortcut on your desktop. if not, try reinstalling. and ifit says, that is it searching for BF2.exe, then the mod will not work. it happened to me with Alpha Project

1)Go to your BF2 folder, and make a shortcut of BF2.EXE on desktop.
2)Right click and choose properties
3)In the target box, hit space after the last " in the line and paste this line +menu 1 +fullscreen 1+modPath mods/IDF
4)Done.

how do I insert levels where I can fly an air craft? preferably a jet.

Hello jsaf87,
At V0.1 you can find aircrafts at the Testmap (without AI support),
But my best advice, wait a few weeks,
I gone upload a new version of the mod (V0.15),
Many bugs & code fixes, plus wider range of aircraft,
And ofcurse singleplayer maps where you can fly the aircrafts.

I am dying to fly the mirage or any jet honestly! Thanks, man. The game it self is well developed. I look forward to flying!

a mod from holy land

How to install i dont understand?