12 years after Doom II and Earth's ships attempted to bomb every trace of Hell from the planet, reconstruction began, establishing a new union in the face of more possible warfare from hostile aliens. The Earth Defense Council created the Earth Defense Force as Earth's line of defense and mode of aggressive exploration, with a number of starships patrolling the solar system and other galaxies. It's been working pretty swell, up until now.The Icarus, one of the aforementioned starships, encountered a pocket of Hell and through some unfortunate circumstance, it's been invaded and taken over. The EDC wants you to infiltrate a still-infested shuttlecraft base on Earth, fly to the captured spacecraft, and either reclaim it or destroy it for none to hold. 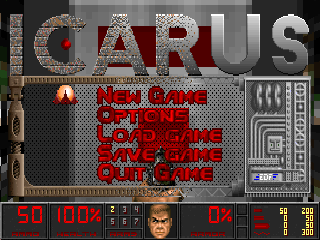