This release is something completely different and focuses on new Character controller, Characters/NPCs, Dialogue, Environmental upgrades, Portals and a quick peak at the quest system. For now, sailing and the Albans has been turned off in this release to do some other pending upgrades not ready for release. This release also spent some time with our internal QA team to try and track down some issues. Due to the internal testing though, JohnSilver has decided that he will have to do basically a complete rewrite of some things. However, this demo has some very cool features and we thought it was best to go ahead and release it to the public as is. This demo does not have an installer, it is in a ZIP file. 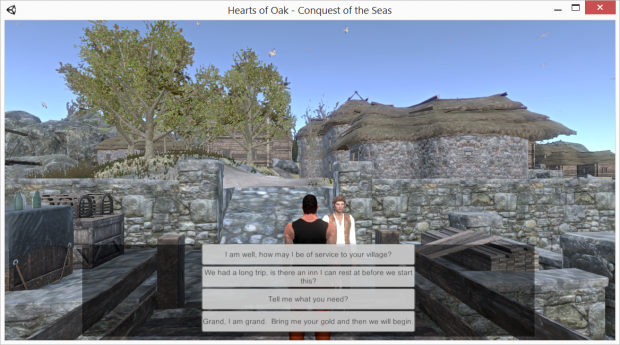 will there be MP in the game? will the game like M&B in "campaing"??

Hearts of Oak is being developed as a single player open world game. Similar to Mount & Blade in some respects, but no co-op campaign mode. At some point down the road, we do plan on adding a limited PVP mode.

For the last three versions, all my character does is walk in circles to the left, immediately upon entering the game. I'd _really_ love to play the game and test it out but for months now I've been unable due to this one thing.

As far as I know, no one else has reported a similar issue. What exactly are your hardware specs?

I have same problem. It's like I need a remote control or something... But I can not play with my keyboard, :/

And your hardware is?? Type of keyboard and connection?

Hello again. Of course, this is my mouse and keyboard: "Gaming Keyboard Bluestork BS-GKB-PACK/SP" (It's black and blue if you search info.)

Thanks. Waiting news from you, ^^

Ok, that is a new one to me, never saw that brand of keyboard before. From what I was able to find out, it is USB only. Without knowing the rest of your computer hardware however, I have three suggestions for you to try.

#1 Try plugging your keyboard in to a different USB port, preferably one on the IO panel on the back your motherboard.

#2 Check your computers BIOS and make sure that Legacy USB is set to Disable or Off.

Is this just a release which, when you installed it, it should be playable, or do you have to install it on the first release?

It is a standalone release, you should not need the previous demos.

only for windows vista? how can i play it in windows 7?