Return to the magical Isles of Stirk, which is the second mod (Beta Release) of this expanding island. With over 25 Galleon Ships to explore, New INN and Shops, tons of NPC's to the growing city. Pegas Horse Ranch! New Caves and Tombs! New Monsters! New Amour and Weapons! To the North, an Aleid Ruin complete with and exterior cave! To the South, around the Lighthouse, you will discover New Ships both Merchant and Privateer Galleons. Begig Pirate Ship and Nautilus Submarine! To the East, you will discover Pirate Cove with Galleons and Warships. To the West, you will find the Akavir Colony with Better Bodies Asians, Buildings, and Samurai Armor. And a Dwemer Tower complete with metal docks and a golden submarine. Egyptian Pyramid! 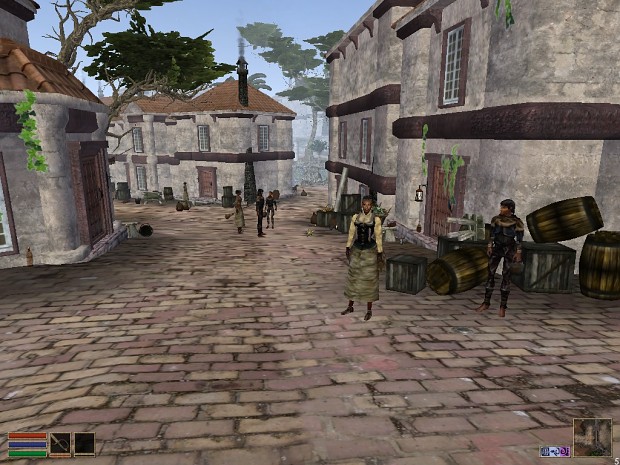 * Talk to Ian in Ebonheart for transportation to the Isles of Stirk. It will cost you 306 drakes, so make sure you have the coin.(There is a treasure chest in the smaller ship docked in Ebonheart!)

* Once on the Isles of Stirk docks, explore the Hammerfell City!
* New 25 Galleons and Ships!
* Pegas Horse Ranch!
* Graveyard and Tomb Tileset!
* To the North, Aleid Ruins!
* To the South, Imperial Ships!
* To the East, Pirate's Bay!
* To the West, Akavir Colony!
* Find the Dwemer Pyramid and Submarine!
* And The Black Nautilus Submarine!

this is a very pleasant surprise Eric
dying to try it out, ty for releasing it

Thank You! It is still a Beta File, so there will be bugs! Talk to Ian (Redguard) in Ebonheart for transport. Make sure you buy food at the tavern in Ebonheart, because of the NOM mod, there will be plenty of beer by the pirates on the island. To the West is Akavir Asain Island! (You will have to swim on the west side of the island to reach the asain ships and mjy asian buildings!) To the East is Pirate's Bay! To the South are Ships and Galleons! To the North is Ayleid Ruins and a Submarine! And the Egyptian Pyramids! Some buildings will disappear in the Hammerfell City... this is a bug due too many meshes in the same cell.

NO! MR3.7 may be compatible but not TR due to the conflict with Booty Island resources. There are a ton of New Ships and Pirates on the east side of the island... and if you swim on the west side you will discover The Akavir Isles! North is the Ayleid Ruins and Cave! South along the coastline is more Ships and Galleons! This mod is basically a Demo... to showcase my work.