FINAL RELEASE - 8/8/16 No longer supporting for reasons of conscience, thanks. TL;DR - Major Power Manufacturers now apply more bonuses to researched aircraft. If your a minor, there is a new focus tree you can work up to nab foreign aircraft manufacturers to apply different, interesting bonuses so you can specialise your aircraft. I am releasing a new feature - MAJOR manufacturers will ALSO be able to acquire licenses from an ally. I have enabled both primary and secondary level exchanges, but tertiary exchanges are not supported. For instance, Italy joins Axis, Germany gets an Italian License Offer (PRIMARY), Italy also gets an offer to get a German manufacturer at the same time (SECONDARY). Later, Japan joins Germany. Germany has the opportunity to acquire a Japanese Manufacturer (PRIMARY), Japan gets a German Manufacturer (SECONDARY), BUT Italy and Japan cannot exchange licenses at this time.

Historical Aircraft and Licensing Overhaul Mod (HALO - No, not THAT HALO!)

TL;DR - Major Powers Air Manufacturers have wider bonuses applied to researched aircraft. Minor nations have a new focus tree you can work up to obtain foreign aircraft manufacturers licenses to apply different, interesting bonuses so you can specialise your aircraft.

1/8/16
* Incorporated Schüewoo's "Icon for Plane" mod for minor nations to give users a better idea of the historical manufacturers. Thanks to Schüewoo!
* Bugfix today, icons fixed, vickers error messages gone and new manufacturers working as intended.

30/7/16
* Feature Addition : Higher Manufacturer Visibility - See all the potential manufacturers you may end up with.
* Feature Addition : Major Powers can now exchange licenses with new allies (for fighters, bombers or naval aircraft) if they can spare the political power. This now extends licenses across to the entire game.
* Bugfix - Improved stability, manufacturers will no longer go missing.
* Bugfix - Typos

* Adds many new aircraft manufacturers to the game (e.g. Sukhoi, Bell, and countless others - see the bottom of the description for full list)
* Diversifies the capabilities of existing in game manufacturers based on historical capabilities (e.g. Whereas Supermarine only makes fighters, Messerschmitt made a range of aircraft that they provide bonuses for.)
* Air manufacturers are no longer created equal, but provide specific bonuses based on the the general historical capabilities of the manufacturer and the aircraft they manufactured (e.g. Supermarine's fighters will have a very high speed and agility and slightly reduced range).
* Unique Graphics for every export licensed manufacturer (see graphics)
* Adds new events, dialogue and decisions
* Adds a detailed, sophisticated focus tree to add depth and flavour to the game and guide you through your licensing decisions, along with fun minigame and some rng moments)
* Adjusts and corrects existing aircraft manufacturers
* Rewards strategic balancing of nations ideology and the political makeup with improved access to manufacturers.
* All Major Powers have new air manufacturing capability
* Allows ALL non-major nations to take advantage of the relationships with the major nations and license superior technology from majors
* Licensing attempts can succeed or fail, open as new majors join the axis, allies or comintern.
* Major powers will watch political developents in your country and terminate agreements if you turn your back on them or go too far.
* Choose whether to align yourself with the Allies, Axis or Communists - or try a daring game of courting all three to access the best air manufacturers - while it lasts!
* Benefit from committing yourself to an ideology end game, but at a cost, or try and keep up a delicate balancing act of trying to have it all.
* Integrates the best of DAM (Diverse Air Manufacturing Mod) and LAM (Licensing Agreement Mod) into one package!
* Special Compatibility Packs will be released for major mods over time (Please Request specific mods) including NWO (New World Order)

- All aircraft have been meticulously researched and general manufacturer triats have been represented and modelled in the game.
- Research Bonuses based on typical aircraft production and specialisations during WW2
- DAM also adds entirely NEW air manufacturers to the mix.
- Manufacturers now make a difference to Jet Aircraft development & design

* All manufacturers overhauled, Spitfires, Hawker Hurricanes, you name it and dozens of adjustments and additions made.
* Vicker Armstrongs has been added as an air manufacturer (NEW!!!)

EXISTING USERS OF ELI (ALL NATIONS) / LAM/DAM or COUNTRY PACKS

This mod replaces it entirely and incorporates it. Don't try to run both at once.

This mod now incorporates "Icons for Plane" by Schüewoo. Used with grateful permission.

Have a great time!
Please don't forget to rate my mod. ;) 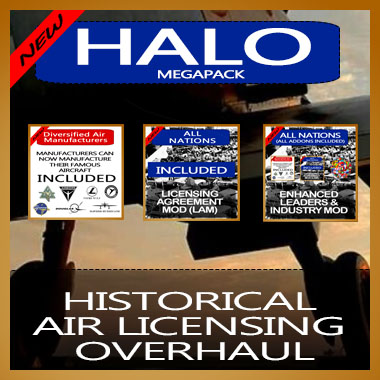