E1M1 - The breach Music used - Suck this from Rise of the triad (Lee Jackson/Robert Prince) This is pretty much the original but with the visuals and designed modernised for faster gameplay. E1M2 - Nukage disaster Music used - From blood After some thought I decided to scrap the previous effort for this slot, so here is a 6 hour speedmap, though visually and gameplay wise it should be solid. E1M3 - Toxic Treatment Music used - Smoke and mirrors from Rise of the Triad by Lee Jackson/Robert Prince The first half is redesigned off the original plan, again the layout is more open and hence more volatile. The second half is pretty similar to the original, except with cleaner visuals and some areas removed. Also a new method to obtain the secret blue key has been designed based on the new layout. E1M4 - Withered Gardens. Music used - Under Death by Mark Klem from Requiem Map08 The start is pretty similar, but the building contents and the level progression have been changed. I really li 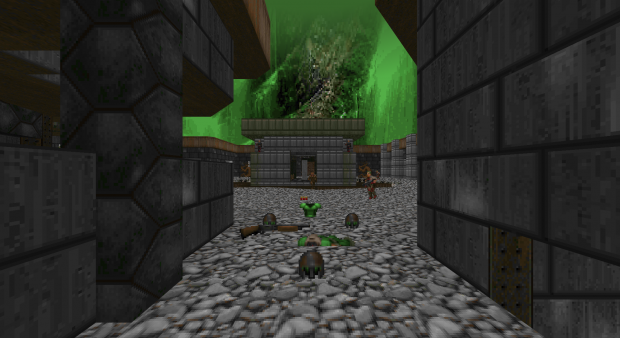