After over a year in develoment Abuzar Rasool have completed his arcade horror modification of Vice City, entitled GTA: Zombie Rise. GTA: Zombie Rise creates an entirely new game set in the familiar locale of Vice City, utilizing the incredibly popular GTA engine to portray a city undersiege by hordes of the undead. The storyline revolves around multiple survivors making their way to the last human stronghold, where they share tales of zombie chaos across over twenty original missions and cutscenes. Featuring new radio stations, particle effects, animations, and a half dozen playable characters(including a stoner on a quest for pot, a pimp tyring to find his girls, and Fat Albert battling zombies in a shopping mall), Zombie Rise creates a totally immersive experience like no other in the GTA universe. Just picture 40 or 50 zombies chasing you down looking for a meal as you tool around Vice, and you've got the general idea of the difference in gameplay. 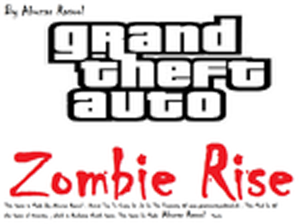