Add file George Romero Riptide Mod V7 All In One

The George Romero Riptide Mod was made in honor of George Romero, considered to be the "Father of Zombie Movies". This mod aims to replicate the behaviour of the Romero zombies, which means that zombies are mostly slow and can only be killed by destroying the brain. There are also other optional features included in this mod to satisfy the cravings of Dead Island players. The Walking Dead comics and tv series and even the zombie comedy Shaun of the Dead are two very well loved horror entertainment that closely follow the Romero style of zombies.

- Added Modern Fast zombies as an option, as requested by a mod user.

- Implemented the No HUD Riptide Mod V2 as part of the official George Romero Mod to give a closer sense of "being there" in the game.

DIR_RomeroModZCanHitV7.rar - zombies can hit, special weapons in shops, lots of inventory space, no hud, collect food and drinks to eat.

DIR_RomeroModZModernFastV7.rar - zombies are faster and tougher, can hit, special weapons in shops, lots of inventory space, no hud, collect food and drinks to eat.

These are pre-configured files that are ready to play for the gamer who can't wait.

ZombiesGrabOnly.rar - zombies only die by destroying the brain. They will mostly grab you. Default exp.

ZombiesCanHit.rar - zombies only die by destroying the brain. They can punch you. Default exp.

ZombiesCanHit25PercentEXP.rar - earn only 25% of exp for slower leveling.

ZombiesCanHit50PercentEXP.rar - earn only 50% of exp for slower leveling.

ZombiesCanHit75PercentEXP.rar - earn only 75% of exp for slower leveling.

ModernZombieFast.rar - based on modern cinema zombies, these zombies are faster, smarter, tougher, and stronger than their classic counterparts. Even the rotting zombies still have some agility in them, while the fresher infected ones are truly fast. To kill them, destroy the brain, although you can also destroy the entire body but it would take too much time. They are also weak against fire. This gives default exp.

ModernZombieFast25PercentEXP.rar - earn only 25% of exp for slower leveling.

ModernZombieFast50PercentEXP.rar - earn only 50% of exp for slower leveling.

ModernZombieFast75PercentEXP.rar - earn only 75% of exp for slower leveling.

SurvivalistInventory.rar - carry unbelievable amounts of stuff, perfect for those who survive by simply scavenging and using whatever they can find! You are a person with deep pockets and carries a bag that was designed to save space to store more things. Find all the fruits, snacks, and drinks to eat them whenever you need to recover from damage!

TouristInventory.rar - carry only a few items at a time, just like an unsuspecting tourist who's on his way to the bathroom when all of a sudden the zombie apocalypse explodes all around him and he has no other choice other than to relieve himself while running away. You won't be able to carry as much food and drinks, so be careful!

SpecialShops.rar - special weapons and throwable items are available in the shops! Punish those annoying zombies by chopping their head off, blasting them with a shotgun, or setting explosive mines to turn them into corpse juice!

SurvivalistShops.rar - nothing sold in shops! Good for people trying to push the limits of their survival abilities! Money is worthless in the world full of cannibal corpses. You know fully well that to survive, you have to search for food and weapons on your own.

DIR_NoHUDv2.rar - feel as if you're really in the island of zombies! You won't see information from zombies popping up like damage, exp, critical hits and the like.

DIR_RadarOnlyHUDv2 - the only thing left on your screen is a radar to help you navigate around the island.

Matrix.rar - Gain the powers of Keeanu Reeves and become The One! Super fast martial arts attacks and super strength! Jump high and crush those puny zombies! Send them smashing from one tree to another! Uppercut them to the next island and accidentally start another zombie outbreak there! Fun times! There are no zombies...because you punched them away!


* Please read the ReadMe.txt file to learn more about how to install this mod and to find out more information. The description has met the 10,000 character limit, thank you! * 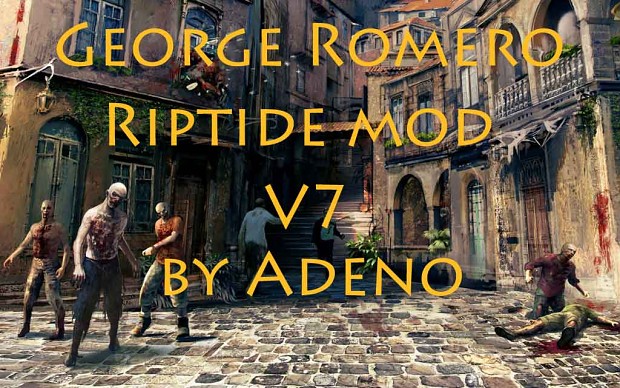 - Better aggressive/fast zombies, I just discovered something while experimenting and I like the effect!

Running would be a regular part of your strategy if you wish to survive while playing with the Modern Fast Zombies. Do you want infinite stamina to compensate for all the fast zombies that will be chasing you throughout the game or do you have any other suggestions, please feel free to let me know :D

Someone on youtube suggested infinite stamina to be an option, I think that's the best choice :)