EPA Weird Weapons Season Pass (Version 3.1SP0, feature-complete 5/5/19). If you have all the official DLC (e.g. hold the Season Pass), this file collects all of my weird weapon packs for Fallout 4 in one convenient mod slot, comprising what is basically a pop-culture-reference-laden love letter to video gaming's most outlandish strange weapons and postgame cheat and novelty items. If you don't have all the DLC, individual mods can be found on other sites by searching the names in the description.

We tend to love funny easter egg or joke type weapons. They can give us crazy game-breaking powers and facilitate odd nods to pop culture and in-game lore current and previous. But what if the vast majority of the weapons in a beloved game were gimmicks?

Now you can simulate that kind of (bock bock) bizarro world in Fallout 4, and have a lot of silly fun doing it, with this one-stop-shop mod (whose apparent ambition has horrifically developed to be the most excessive, elaborate surreal, absurdist weapon mod in video games) that adds over ONE HUNDRED TWENTY EIGHT strange weapons & items, many of which are homages, and some original concepts. Some are direct weapons, some are indirect, some are more tools than weapons, some are tame and some are cataclysmic, and nearly all of them are terribly, terribly impractical (maybe even stupid or ridiculous).

If you have all the official DLC (e.g. hold the Season Pass, bought the full collection of DLC individually, or got the GOTY edition), this file collects all of my off-the-wall weird weapon packs in one convenient mod slot, comprising what is basically a pop-culture-reference-laden (can you spot them all?, see below) love letter to video gaming's most outlandish strange weapons and postgame novelty and cheat items.

The game's scripting flexibility is stretched to its outer limits to deliver a wide range of unique effects, and to give you as many abilities as possible so that Fallout 4 can truly shine through as a emergent systems, sandbox game.

If you are bored with Fallout 4 and want to have fun and exercise the game's ability to simulate chaos, this is the mod for you.
If you really liked looking through those video game cheat books as a kid, this is definitely the mod for you.

In some ways, this is an important kitchen-sink-style cheat mod and proof of concept for those not on PC that shows how flexible native Papyrus is (it adds rudimentary programmable computers a la ComputerCraft, it allows spawning arbitrary forms in through in-world number entry, it takes apart the world and provides warping, restructuring, and all manner of NPC manipulation). There are really stupid, tech demo features like a vibration test for your gamepad (e.g 360 wireless controller) which allows you to control the bias and force of the motors by your character's elevation and azimuth orientation (e.g. look up and face North for max left & right vibration, be crouched for continuous rather than pulsing feedback -- most items in the mod have crouch and or melee triggered "alternate fire" or contextual-control modes, like Perfect Dark).

If you want to feel like a little more than a demigod in Diamond City (every single non-player-home interior has a special item in it!)...

If you want something to accompany your serious "realism" based playthrough, well, this might be the wrong tree.

(I would love to see a video with all of these weapons and their alternate fires fully showcased, but it might end up an hour or two long. And doing full playthroughs or speedruns with the stuff would be... interesting.)

(If you don't have all the DLCs, go get the EPA Weird Weapons WackyPak and then the individual addons not in the WackyPak enumerated below)

What Stuff's In this Compilation?

From It Came From Far Harbor!

beneath them, probably folding them up a bit; also comes with some nutritious Hase) [Coastal Outhouse, near Oceanarium]

NPC will still have their weapon equipped.[Myrna's House] any NPC who comes too close until they are activated. You can explode them for a chain reaction. Crouch-firing this weapon spawns a Mimic, which will attack when NPCs get too close.[Myrna's House]


From Form F From Address Space

You can use the bottom buttons on the front face of the marquee (or the letter display segments they connect with) to enter a 8-hexadecimal-"digit" Form ID used by the game.When you shoot a target or activate the return arrow on the end of the marquee (designating the marquee as the temporary spawn target), something will happen.

What happens depends on the type of Form pointed to by the ID, and whether your character is crouched.

If the form is an ObjectReference/RefID (0001A4D7), you can summon the object to you by using the marquee when standing, and create a refrigerator warp door to the object when crouching.


If the form is a thing (000BD56F) that can be placed in the world but isn't (not a reference), an instance of the object will spawn. (If you are outside, not sneaking, and it is possibly susceptible to gravity, it may be delivered to you by "airmail".)


If the form is weather (000DB2A1), the ambient weather will be changed.


An invalid form should net you a buzzer noise. (Note: User placed items are generally assigned high-order form IDs, and the game doesn't cleanly retrieve those forms, e.g. with the MSB set, 0x80 and beyond.)

If the form is something that can be added to or done to a thing (hereafter the "Victim"), like an EffectShader, it will be added to the Victim if you are standing, and removed if crouched.


For example, you can set Nat on fire visually by storing her as the Victim (entering 00002f21 and pressing the PRID function button on the marquee's side), and entering the FireHazard effect ID (00231F8A).


There's a button to (attempt to) find the closest reference (to the last spawn target) of the form on the display, or the closest NPC (crouched).


There's a button to toggle the existence of a reference, or the AI processing of a NPC (crouched).


There's a button to get rid of the marquee (crouched), or zero out the display segments (useful).

From Angle of Mercy


stationery), and while not crouched at NPCs to run your currently active program on them. See that mod's page for programming and LecTerm operation instructions.[Diamond City Radio]

From Avoid the Crazy Chicken Underground


trooper squad.[Arturo's House] ground and "eat" it. Then they will die. This is basically a revival of Oblivion's Dark Brotherhood Poisoned Apples.[Arturo's House; downstairs, after returning] want within a small radius. Once you've left the area for a while, the GECK Jr. will be gone, but you can shoot it somewhere else.[Arturo's House]


From Fisher of Men


From The Hitchhiker's Gown at the End of the World

From The Maze Ruiner

And, for extra fun, see if you can spot the very passing and highly pointless oblique pop culture references to, inter alia:

VR Compatibility Note: This mod is partially compatible with Fallout 4 VR (i.e. it looks pretty cool on my Vive). Unfortunately, certain changes in the engine for that release prevent some of the weapons from working. Specifically, the scripting functions to get elevation angle and capture weapon melee events no longer work properly in FO4VR, so weapons that depend on them (SPAWNDO.COM, Scaleo Diet, the Portal Gun etc. in this mod) will not work unless a solution to this problem appears. Also, presumably to avoid motion sickness, knockback of the player which is severe (e.g. Propulso 5000 aimed at your feet) is broken functionality. The game appears to load assets a little differently; for example, my build had some sound-file-related issues with the Vuvuzewaspz weapon as well. I am committed to a full FO4VR release in the unlikely event the developers can offer some feasible workarounds. 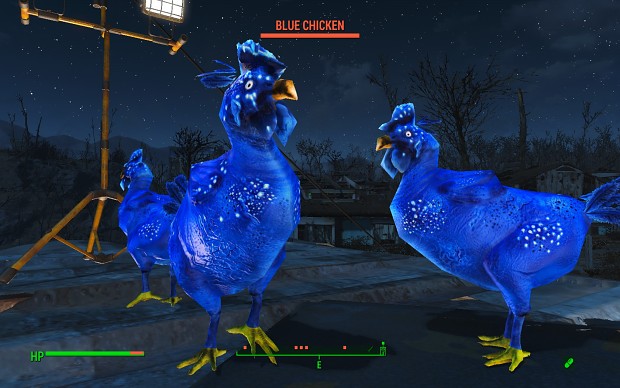