Dungeons of Daggorath was one of the first games that attempted to portray three-dimensional dungeon space in a real-time environment, using angled lines to give the illusion of depth. While Daggorath was visually similar to these other games, a prelude to TES I: Arena and TES II: Daggerfall, it added several elements of strategy, such as different kinds of monsters, complex mazes, different levels of visibility, and the use of different objects and weapons. 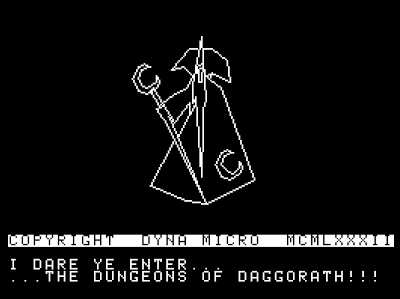 The game uses a text-based interface in which you type commands like MOVE, TURN, ATTACK, USE, and STOW. Most of the commands, other than movement, apply to the RIGHT or LEFT hands. So to get ready at the beginning of the game by taking your wooden sword from your backpack and putting it in your right hand, you'd use "PULL RIGHT WOODEN SWORD." To use this sword to then attack a creature, it's "ATTACK RIGHT." Fortunately, the game allows for some abbreviations. Each word need only have enough letters to distinguish a unique command or object, and you don't need to specify item descriptions if you only have one of them. So instead of "PULL RIGHT WOODEN SWORD," you can just type "P R SW." Just "M" is enough to execute forward movements, and "T R," "T L," and "T A" are enough to turn right, turn left, and turn around. These abbreviations are important because everything's happening in real time, and you don't want to be accidentally typing "ATTCK" when you go to attack a monster. Even with the abbreviations, I often get tripped up by the game not reading the SPACE bar in between commands. "AR" accomplishes nothing. 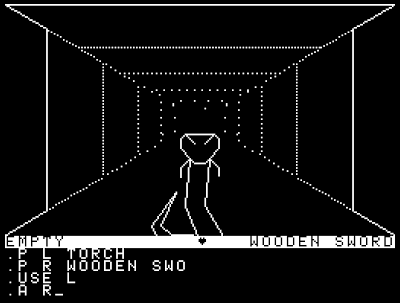 1. Carrying a bunch of extra inventory items, dropping them in a square, and waiting. When a monster arrives, he will reliably use round after round to pick up your dropped items instead of attacking. When he dies, all the items get strewn on the floor again, and the process repeats.

2. Hit and run tactics. This requires careful timing and fast typing. You wait for the enemy to land in your square and ATTACK just as he arrives. Then, before he can land his own blow, you MOVE ahead a square or two, wait, and repeat.

3. Adopting a "pet." There are a few monsters whose attacks essentially do nothing to you, even on Level One. Since only one monster will occupy a square at a time, you can stand in their squares and take a rest break between killing tougher monsters. 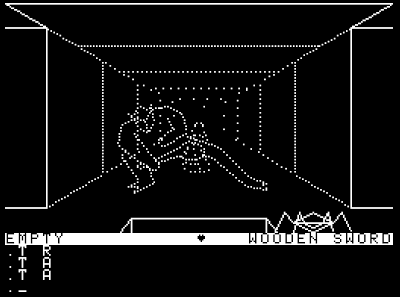 These monsters are lined up to attack, but they can't as long as the spider is in my square. 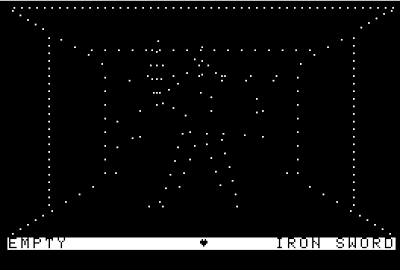 The world goes dark as my torch runs out. Or maybe I'm dying. I forget which.
As you explore the dungeon, you find weapon and item upgrades, including swords, shields, rings, and scrolls. To enjoy the full benefits of an item, you first have to REVEAL it, a command whose success depends on your level. Even after magic items are revealed, you have to use the INCANT command to release their power. 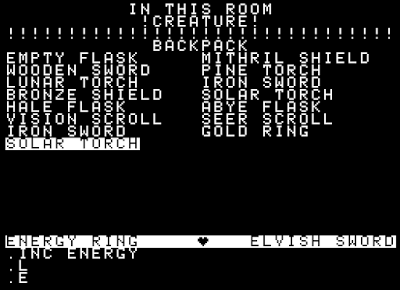 Slaying enemies promotes a steady but invisible increase in the player's level. You start to notice that you don't become quite as winded from movement and attacks, and you can take on tougher enemies. REVEAL starts to work move often. But you never find out a specific level number, experience point number, or hit point total. Playing this game is thus much more of a sensory experience than a cold assessment of mathematics. The screen shots really don't do it justice; I recommend you check out one of the YouTube videos to get a full sense of the game. 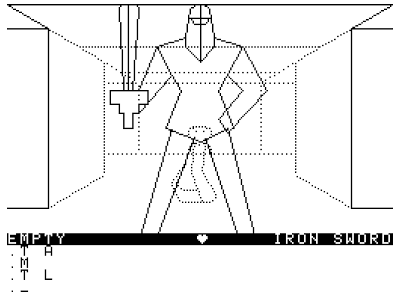 I died before taking this screenshot. My map of Level 1. 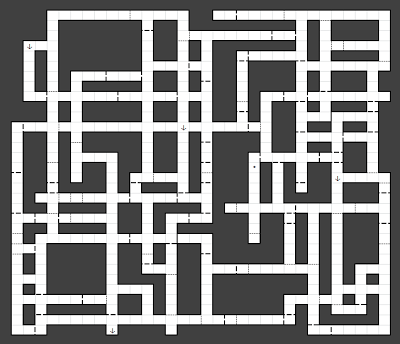 These demon things start to appear if you backtrack. They're crazy hard. I died taking this screenshot. 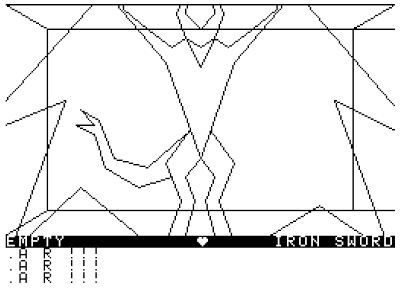 Also, on Level 2, you find a couple of "Vision Scrolls" that provide an automap. 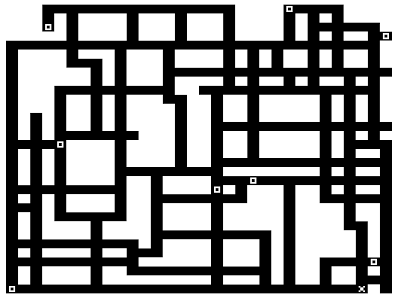 The game's automap of Level 2.
The purpose of the first two levels is simply to collect all the valuable items--particularly two solar torches, an iron sword, and the two magic rings--and to kill all the monsters to develop your character. On Level 3, you face tougher monsters and a "fake" version of the wizard. Killing him is necessary to progress to Level 4, but it's not easy. He only falls to magic attacks--specifically, the rings--and if you're not a high enough level when you encounter him, you can burn through both rings without killing him. Oh, and he's capable of killing you in one blow, so you can't let him get an attack in. Also, he doesn't pick up items like the other monsters, so that tactic doesn't work. 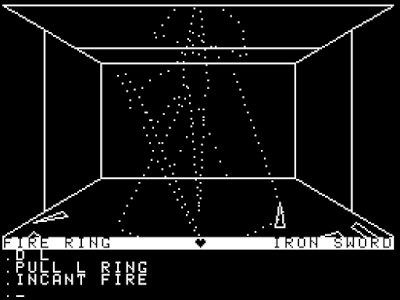 You get automatically teleported to Level 4 when you kill the fake version of the wizard, and you're stripped of all items except what you were carrying in your hands at the time. I found this level to be the most difficult, as it's loaded with tough monsters, and hard to find a place to escape and rest, or even find a break long enough to try any of the standard combat tactics. There was a lot of reloading for me on this level. When the dust clears, you have an Elvish Sword, a Mithril Shield, a "Joule Ring" (responds to INCANT ENERGY), and a "Thews" potion (increases strength). It's time to take on the wizard. 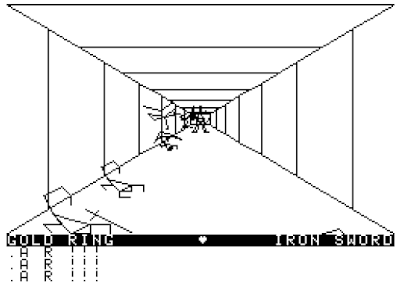 Level 5 was just as hard for me as Level 4. The improved sword was balanced by the fact that the sword takes a lot more energy to swing. Like his fake counterpart on Level 3, the wizard can easily kill you in one hit. It took me about four hours of continuous play (and lots of reloads) to clear out the ancillary monsters and finally deal with the wizard in a clear corridor. (The "pet" approach would have been a good idea here, but it was late and I wasn't thinking well.) 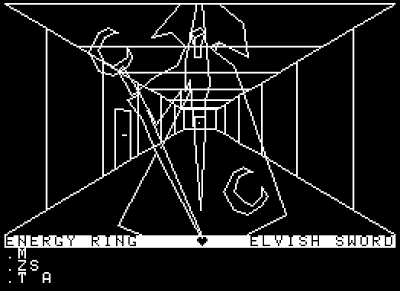 I had to blast him three times with my Energy Ring, retreating and waiting a long time in between blows; the ring really increases your heart rate. Then, I adopted the hit-and-run tactic to strike at him about 20 times with my Elvish Sword. He killed me a lot during this process. I started to despair that he'd ever die, so it was a great relief when he finally disappeared. Killing him somehow emptied my inventory, but he left behind a ring which, when REVEALED, was called the "Supreme Ring." 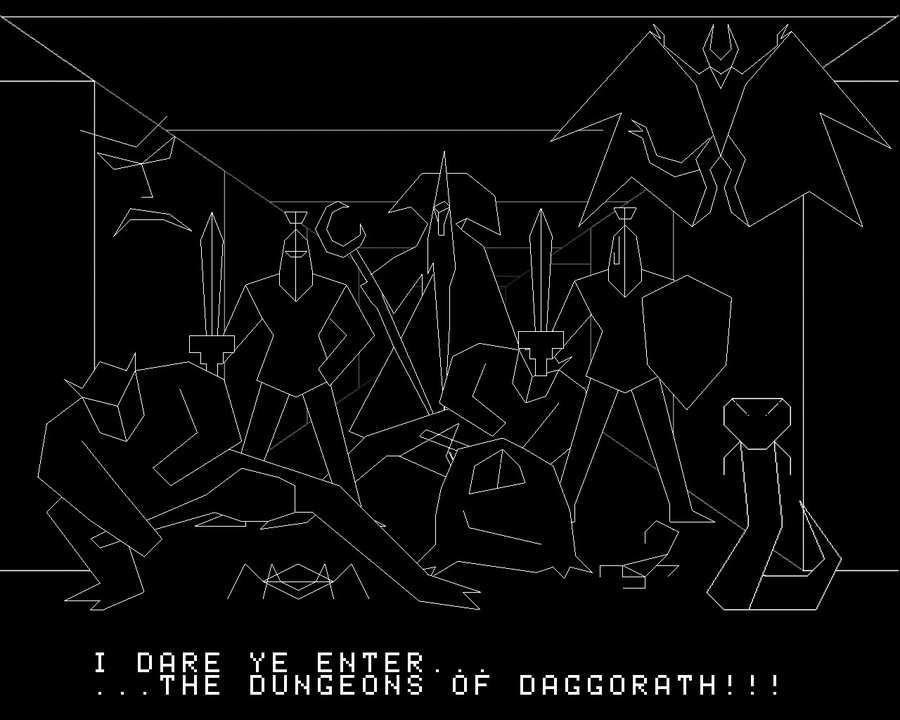 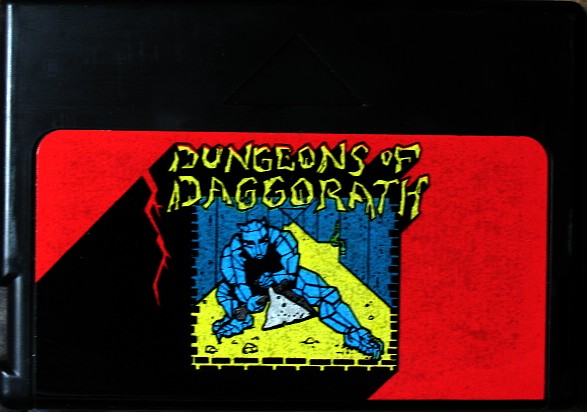 This file is a self contained .exe all you have to do is click the file and the game will download and run on any version of windows 98, XP, 7, and 8! You do not need dosbox or any other external program... just Click and Play!

But you can play only with the keyboard ?

Yes, only with the keyboard! The game was released back in 1982 for the Tandy TRS-80 Color Computer... this before the invention of the Mouse! There was a slot for game cartridges like Commodore 64 or Atari 2600. And the harddrive was a tape recorder and cassette. This was even pre-DOS and Windows using Basic Programming. The game has been ported over to Windows using a DOS emulator.

The File now contains the .pdf Manual! For the Keyboard Commands!!!

Here are some important Links about the game!

(2) A Tour of Daggorath
Iloveglory.freehostia.com

tip.
creatures will pick up items dropped on the ground one at a time before attacking you. so throw down your used torches etc where you stand and you can get in free attacks. the more items you have on the ground the longer you'll be able to get in free hits.

some smaller creates like the scorpion i believe will not try to pick up items.

Thanks for the Tip!!! Dropping items is always a good combat tactic, especially when fighting the tougher monsters like the beast, hunchback, and knight!

Finally, after only 33+ years I have won this more than once. I think it's harder on a modern computer - monsters move about twice as fast sometimes for no apparent reason, while on the < 1 MHz (!) TRS 80, play speed was stuck at something more manageable.

Level 4 is still impossible-ish, but the tactic that helped, then and now, was to keep moving, not too fast, and around corners, because the "AI" can only follow you in a straight line. Then divide and conquer, or hit things once or twice and keep moving.

When sounds are playing, nothing else happens but you can type, so if an enemy is about to enter your space and it or another monster makes a sound, attack several times and move.

I wield the sword in the left hand, because "A space L enter" is easier to type repeatedly and accurately.

I had this original game on the TRS-80 back in the day! And only beat the game once, I thought I beat the game when I defeated the first wizard... and then realized he was only a mirror image and the real wizard was on a deeper level! The magical rings are key to beating the tougher monsters and demons and wizard!

Dropping equipment is key to slowing down monsters... and getting in extra hits! Using the abbreviations A L and A R are key to fast hits!

I would like to see this game updated to a new engine with modern graphics! Something I might look into as a total conversion...

I can't believe that this game is still in existence. The last time I played this was literally 30 years ago. Amazing that the torch is still burning ; ). I just downloaded it on my PC and for some reason I cannot play using the color mode. It won't even highlight the selection for it. Any help would be appreciated. Thanks again.