The year is 818 A.S. and war is everywhere. 17 years after Trent saved humanity and one year since Episode 13 took place, a Sirius-wide war is being waged. Liberty has dealt a deadly blow to Rheinland, seizing invaluable research while continuing to dominate their ever enlarging battlefield. Omega space shakes under the growing power of the Corsairs and Hessians, as both forces take advantage of Rheinland's weakening position. Calls for an all out war with the once grand House are becoming more frequent and not only in the halls of the Corsairs. The Omicrons are facing a rapid power change as both the Bounty Hunters and Order forces suffer what could only be described as a catastrophe. However, even these brutal wars pale in comparison to the raw power that Bretonia is finding itself faced with. It is not a Kusarian foe that threatens to destroy Queen Carina's home, it is a French foe. 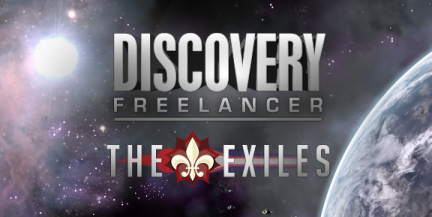 Yeah, well, it did take us almost a year to remember that we had a moddb account and post the latest update. The next release Discovery 4.87: Conquest is due soon.

Should we be downloading these updates in order and play out each one first? Or can we download just the newest?

You can download the newest file named discovery_4.86.0_jul12.zip to get the latest mod version.

Snak3 is right - an autoupdater is also included with the mod which means bugfixes and updates will be downloaded automatically when they are published.

to the next ones to come:
While is recommended to look for the newest ones, but if you want to see how the "universe" was on prior states, you can always download the older games :D

Question, I start a new game (sp), I start at level 38? and $500 with an administrator shield mk 3. I am unable to destroy enemy ships as I do no damage, and they likewise are unable to destroy me.
Am I doing something wrong with the mod install? Is there a toggle I need to select, Or is this mod multilayer only? I thought I read it had single player as well. Thanks for any help.

@Guest: OpenSP is supported, which is a free roaming mode. We had to drop campaign support several versions ago due to technical conflicts. I believe you can pick your starting funds and spawn location during the installation process. So you could pick a billion credits in New Tokyo, for example! There is also another useful tool you could download, which is the IONcross save game editor which will allow you to customise every aspect of your ship. I believe the Admin shield was included for people who wanted to easily explore the mod with risking much - if you're looking for the original grassroots challenge, Is suggest selling the shield and either buying a freighter or trying low level missions.

I didn't get that option during installation

Hope it helps you out.

when is this file going 2 be downloadable again?

You can download it now. Grab the file from this site and follow the instructions here: Discoverygc.com.

The file you have selected (discovery_4.86.0_jul12.zip) is not available via any mirrors. Please check back shortly as our servers update every 5 minutes. i cant download it... please fix it i wanna play btw i voted for u can i withdraw my vote?

WTF is wrong here?
The file you have selected (discovery_4.86.0_jul12.zip) is not available via any mirrors. Please check back shortly as our servers update every 5 minutes. How many 5min do I (we) need to w8? Give us more download links or mirrors!

Hei, does somebody read this here? Or this mirrors doesn't wort for Romania? Give us new mirrors or new links to 4.86! Also I have tried to take 4.85 then the patch to 4.86 and copy over the previous but sadly it gives me error and the game doesn't even start, just stay crashed in my system.

Keep trying, eventually it will be available for you. You need to install 4.86 on a clean/fresh installation of Freelancer, don't mix 4.86 with 4.85 or any other mod. Also, don't forget to delete your old saved games (back them up first if you will), or the game will crash if it finds AutoSave.fl from other versions/mods.
I'm not sure if I'm allowed to post here, but you can find an alternative link on discoverygc.com/forums

hey i got a problem....when i want to install the game(4.86 JUL12)It doesn't work i mean when it says instalation folder D:\Games\Freelancer i can't go to the next steps..i can't press next button it does not work....what should i do in this case?

Really Buggy Missions, So Far i tried 7 missions and only 1 worked, and that was completely overpowered, A Look Would Be Much Appreciated

Finally got it downloaded, but i have no options to change single player mode. Ive tried opening it in admin, and no go. what do i need to do to make changes to the start?

Hi this might be a stupid question but is this mod have HD texture whit it or if i want that i need to download it and install it separately ?

thx in advance for your time

No, it doesn't have, but there is a mod called "HD Textures 1.21". Google for it and see the screenshots on the mod's site. I don't see much improvement, just some sharpness on the textures.

After having a blast in SP with version 4.85, I downloaded this one. Unfortunately there is a problem with the file common.dll. The opening screen appears and then back to the desktop. Any suggestions? Thanks.

I fixed the problem I had. But now I installed this mod but I didn't get the choice of entering in the SP game. Should I reinstall the mod?

How have you fixed it?

As it turns out, the only way to 4.86 in SP mode is by using saves from earlier versions, for example 4.85.

Whats Wrong With The Main Discovery RP server? Seems to be offline

Best Mod for freelancer as far as I'm concerned.

This needs to be in Freelancer mod manager format to allow tweaking of player starting place/credits etc.

Any help ? or can someone give me specific instructions to install this mod ? Thanks before

I want to ask , why the police in this mod does not make check outs in the cargo pods?