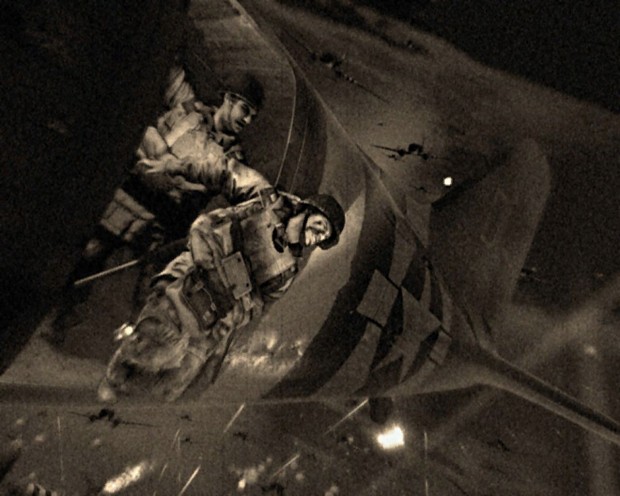 I almost forgot to mention:

The dog is not aggressive or dangerous and will bark and yelp etc when you move near it....

You get tanks after playing mission for a while and mission becomes tank and infantry combat with objectives to complete...

After destroying all flak guns the map will expand and you get more objectives to complete....

Excellent eye for detail with this map and mission, all iron weapon's mods are excellent...

The 3rd mission called Pegasus bridge assault will be uploaded in the next few days so stay tuned guys and enjoy....

You know Mopar, if I'd collect every download you release, you'd have enough content to make a full mod.

But it's my opinion, don't mind me ;D

This mod again gave me that real war feeling, with the misty weather and the gun sounds in the far distance, the lights of the vehicles and where it states 'go here' leading onto the second phase of the game, well I really liked the rain to, something of which I always have in my game via the Gem Editor, though how have you made the rain to appear so thick in detail if you get me drift? and the sound of it to, nicely put.

I also got that Band of Brothers: feeling, being D-Day Plus 7, like that is what the game did for me, it reminded me of that episode, and how the american paratroopers were seen swaying to the ground from the sky, that was a real buzz to see, especially if a few comrades had fallen, oh also I really liked how the Germans spread out like ants scattering everywhere, I have saw in alot of mods were the enemy will stay put in one place, but these Germans were advancing constantly, and then they will fall back, thats what I really liked about this game, its like life kind of found its own way.

But yeh again, a cracking mod, and definately one for the classics list indeed, oh and I managed to play on medium settings to, which was great, especially how I could relax with the game & thoroughly enjoy it at the same time to.

Have you ever made a mod about Carentan? I woiuld really like to see something like that, with the bricks n rubble, shell/grenades blasts here n there, gun sounds in the far distance, plenty of demolished buildings, that sort of thing, oh and that misty weather also with the rain.

Anyway I do hope there is more to come, and best of luck with your future mods.

Mopar I am impress with your work but I will be more impress if you could do a Saving Private Ryan Missions the movie was amazing so try to make a version of it.

Here (https://www.moddb.com/mods/saving-private-ryan-by-ironweapons/downloads) it is for original men of war though, maybe Mopar could convert it to assault squad.

Darn this is why I need the Original Men Of War rather then Assault Squad.

Thanks guys, Saving private ryan is being converted at the moment....

I did convert a carentan mini mod with 2 missions, I will upload for those wanting carentan...

I also have a 5 mission carentan campaign by furaxx ( french guy ) but it will be some time before i finish the conversion....

Amazing and your epic!

All of my other conversion are on the page below:

Just a few to choose from... LOL

Wahey!! A Carentan mod, is right, and a Saving Private Rytan mod to, this just gets better, you are a very talented modder Mopar sir.

There is one particular mod I would very much like to play again, but I don't for the life of me know what it is called, I think it was made by fastlegs, it starts out with like this huge trench on the opposite side with all these germans in, with a heavy tank behind them moving up and down, there is an airfield to the left flank from where the gamers base is, I remember when infantry were called, they would always turn up in trucks, oh yeh and there was this like lone soldier on the other side of the map.

The game started out on an empty muddy like field, with a few field cannons, and I think a mortar, but yeh what I do miss about that mod, is when the infantry would al;ways turn up in trucks, not much to go on I know, but I don't suppose you know of such a mod, or even better maybe a list of mods made by fastlegs, that way I couild scan through them, and hopefully find the one I want, but yeh I do remember that british soldier on his own on the other side of the map.

I believe you are referring to this mod
(https://www.moddb.com/games/men-of-war/addons/ww2-secret-base-12)

WW2 secret base by fastlegs is in the process of conversion to MOW:AS same as Tank Battles and ALL of his other mods too..

I am converting as many as i can by myself.....

From collecting as many FOW and MOW mods as i can i have a large selection to choose from as far as converting them to MOW:AS goes...

If you have a mod you want converted to MOW:AS send me a d/l link and i will do my best to convert it within a few days ( depending on complexity of mod )

Can't wait for the WW2 Secret Base mod though, its a long time since I played it, I always had so much fun calling more infantry, as they would always turn up in trucks, I really like that option, it just looked so cool to watch them chug along across the muddy field onto the green field yonder, that was my favourite part of the game, just before I got to the airfield, I would get my men ready, organised/prepared, ready to take it out, and then move further in onto the next objective.

Best of luck with the conversion.

So will there be the mission that you have to make sure Private Ryan Survive and you also have to hold the bridge?

yeh nice idea, maybe an actual mod based exactly on that.