Release Notes to the Cross of Iron mod “The Battle of the Scheldt” :

In 2019 I decided it might be a good idea to convert the Battle of the Scheldt mod that we released in 2010 for Close Combat 5 : Invasion Normandy, to Close Combat Cross of Iron. I had wanted to release it in commemoration of the 75th anniversary of the Battle of the Scheldt estuary in October 2019. However, as usual with modding, plans do not go as intended and with 75% of the mod finished I lost my HDD with the mod data being unrecoverable. It turned out that I had to redo most of the work I had put into it.

Now I am delighted to present to you this mod. It does differ somewhat from the CC5 version in that many maps have been split into several smaller maps where deemed necessary or where possible, some maps had to be turned and flipped in order to make them work with COI and some maps were removed because they won’t work in COI as intended. I also deleted the Fallschirmjäger part of the mod, that was relevant for the CC5 version since that featured a strategic map incorporating the eastern flank of the Canadian offensive. Not to worry though, I am reserving this bit for a future sub-mod.

Cutting up the maps means that this mod now features over 50 maps.

Since the original research well over 10 years ago I found out more details about German troop dispositions and the composition of the German fortress troops and their often foreign captured weapons. CC versions with battle groups moving on a strategic map won’t do justice to the nature of these troops and I am glad that with this mod I have been able to incorporate much of the result of my research.

I have had tremendous support from SchnelleMeyer, who is incredibly resourceful and knowledgeable in the area of modding, as well as seemingly unperturbed by any sort of setback or hiccup.

I hope you enjoy the mod.

The mod has the West Front mod data and interface graphics as starting point. Many thanks to its creators.

All maps created by Buck_Compton.

A big thanks to the creators of modding tools such as 5CC, CCMunger, CC2Tools etc.etc.

General advice and support by Schnellemeyer.

Most of the scenarios come in different flavours:

SP-A stands for single player – Allied. Play this scenario as Allies only. These scenarios are always of the ‘assault’ type so that you have to capture more VL’s for a victory. You will have less units and less command and support units than the AI.

Note: Play the SP-A scenarios with ‘After taking all victory locations” unchecked. In most of the deployment zones there is no VL present.

SP-G stands for single player – German. Play this scenario as Axis only. These scenarios are always of the ‘assault’ type so that you have to capture more VL’s for a victory. You will have less units and less command and support units than the AI.

Note: Play the SP-G scenarios with ‘After taking all victory locations” unchecked. In several of the deployment zones there is no VL present.

MP stands for multiplayer. Designed to play against a human opponent.

Cross of Iron offers an ‘upgrade path’ for teams. After a battle you may choose to refit a unit with a different unit of a higher value.Since COI covers a span of 5 years of war the player would certainly make use of this option in order to upgrade his units to a more potent unit to deal with the ever evolving equipment of his opponent.

However, this mod deals with a relatively short episode on the Western Front. There is no need to mimick the evolution of equipment over a longer period of time. Losses in personel were replenished by fresh troops without combat experience and at the time the Germans were only able to replenish their weapons with a plethora of foreign captured weapons.

To mimick the shortage of weapons and the fact that lost weapons and personel were replaced by lesser quality weapons and troops, you will not be able to refit your teams with teams of higher value but only to the starting strength of the team or to teams of lesser value. So, downgrade path it is.

The Battle of the Scheldt mod for Close Combat Invasion Normandy attempts to recreate the World War 2 battle for the Scheldt estuary which is the seaway from the North Sea to the port of Antwerp, Belgium. This battle took place in October and November 1944 after the Market Garden offensive. While Market Garden was a partial success for the Allied forces it left the High Command with a thus far underestimated problem: quenching the supply thirsty Allied forces. Finally it was recognized that the supply lines to the front were too long to keep the offensive going. The Canadian First Army was ordered to clear both sides of the Scheldt estuary of the German defenders.

The Battle of the Scheldt mod was started back in 2004. At the time Buck_Compton was to mod making as he was to the military on his first day: clueless, overwhelmed and lost.

With help of Close Combat community members he has come a long way since. The final result is impressive with an all new strategic map and 44 maps created from scratch. All maps were hand drawn after aerial reconnaissance photographs of the actual battlefields.

Buck_Compton would like to thank in particular: JimRM2 for putting up with his endless list of questions and for the beautifully drawn sea water, Tejszd, Atilla for their help on so many things, Manoi and Dodam for their gorgeous photoshop textures and their help on photoshop, Norden for his unparalleled German bunker drawings, plus a variety of other textures, PT for advice and critique on mapmaking , Mopa for vintage photos of Canadian troops , CCS and Mooxe for hosting the download files and the dedicated forum, 7A Clan for playtesting and myself for comments on the map designs, unit and data research , game data (with Dima’s TRSM as starting point), playtesting, mental support and so on.

Furthermore we would both like to thank anyone else who has offered any sort of help and the CCS forum members for their interest in the mod. 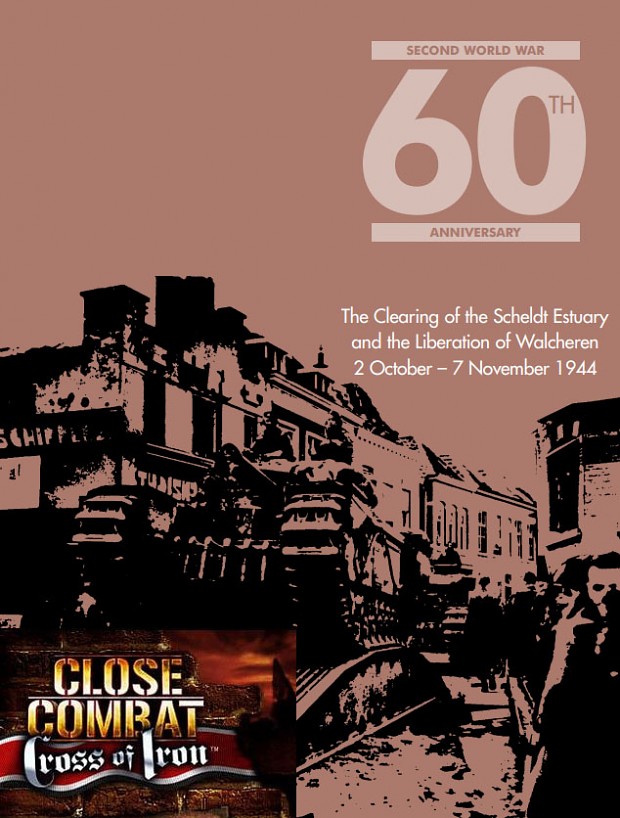