GZDoom 4.5.0 required. Finally, I believe I've done enough to warrant a proper 7.0.0 release. It's likely that it's going to receive a minor updates in the nearest future, as people fish out new bugs and inconsistencies, but the main bulk of the work is done. 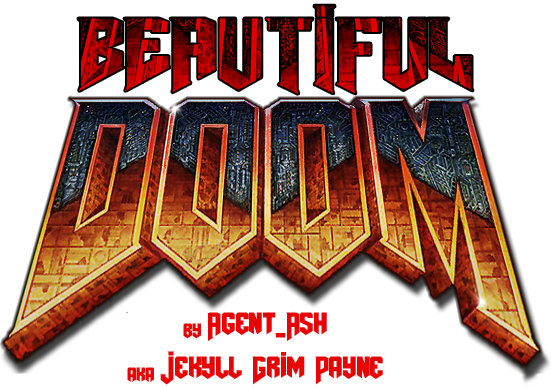 no work with lzdoom

Well, the mod is for GZDoom, so, unfortunately, it doesn't work for LZDoom. I think as soon as LZDoom updates to have the new overlay functions, it'll work fine. I can' say when exactly that'll happen but hopefully soon.

• Is there any way to visually remove that second pistol to the left in Enhanced Weapons? It's the only weapon for which the Enhanced model is very different.
• Or any way to increase the opacity of the HUD?
• Or to use the vanilla HUD?
• Or disable fancy new enemy projectiles specifically? I mean no offense, but some of them look a little tacky.
• Also, I may be going crazy, but is there a slight problem with the vertical autoaim of the shotgun? There were certain situations when other weapons would manage the high upward angle, but the shotgun would just shoot horizontally.

> Is there any way to visually remove that second pistol to the left in Enhanced Weapons? It's the only weapon for which the Enhanced model is very different.

The pistol to the left means you've picked up a second pistol and can fire both of them using Alt Fire. I'm planning to keep it as is, since most users agree that having dual pistols is a nice early-game boost, and it gets replaced by Chaingun very soon anyway.

> Or any way to increase the opacity of the HUD?

Not at the moment, but I'm planning a few HUD adjustments for a later minor release, and I'll take this into account. The current HUD is still in SBARINFO but if I port it to zscript, adding a transparency slider won't be a problem.

> Or to use the vanilla HUD?

Again, due to the fact that it uses SBARINFO, there's no way to do it; implementing toggleable HUDs in GZDoom is, unfortunately, rather complcicated. But it'll likely be added in a later version. For now I suggest using GZDoom's "Alternate HUD", it'll override any custom HUD.

Do note that there TWO huds in the mod: the "statusbar" version and the fullscreen version. You can switch between them as usual, by pressing +/-. Arguably, my fullscreen version is more flexible that gzdoom's built in fullscreen hud, since it gives more information. Otherwise Alternate HUD may be a good solution.

> Or disable fancy new enemy projectiles specifically? I mean no offense, but some of them look a little tacky.

Not at the moment, but this will likely be added as well. As an alternative you can play Beautiful Doom with Smooth Doom that adds its own enemies that look closer to vanilla; as long as "Beautiful Doom Monsters" option is disabled, Smooth Doom's monsters will take their place, i.e. mods should be compatible.

> Also, I may be going crazy, but is there a slight problem with the vertical autoaim of the shotgun? There were certain situations when other weapons would manage the high upward angle, but the shotgun would just shoot horizontally.

I couldn't reproduce that; shotgun uses the same firing function as any other weapon. It's possible that it's the pellet tracers that go off target, not the actual hitscans (they're separate things, so, it's possible). I'll be on the lookout for other reports concerning this, thanks.

Thanks for the reply.
• To clarify, I've no problem with the enhanced Pistol's dual-wielding feature, I just mean that the dual pistol sprite is... kinda ugly... I would love the option hide the left-hand pistol part of the sprite. Still use it, but just not see it when not using it. Just if you ever felt the urge to do me a personal favour.
• I really like the BD monster sprites, it's just that I find some of their BD projectiles mess with my eyeballs and disorient me. It's very hard to gauge their distance and dodge them in intense situations.
• About the HUD, this is just a random idea, but it'd be cool to have the option to make the background colour of the health/armour elements, kind of “drain” right-to-left, or top-to-bottom, Diablo style, to represent how much health or armour is left. Not opaque of course, just a light translucent blue or green tint.
• I'll try to make a video of the shotgun vertical aim thing. I really noticed it in Map 13: Downtown.
Thanks again.

The second pistol is actually using one of the sprites used in the classic pistol firing animation, so, while I can agree it's not the prettiest, I don't think it's much uglier than the Doom pistol is in general; I actually quite prefer this stance to typical dual-wield stances.

The HUD may change in various ways once I get down to actualy re-coding it.

For bugreports, it may be more efficient if you submit them via the mod's GitHub or my Discord server, both links are on the mod's summary page. I rarely visit modDB, so things tend to escape my attention here.

What's the load order if I want to run this with another gameplay mod?

Usually it's preferable to load another mod last (so, after Beautiful Doom in the load order), since whatever is loaded last will take precedence. However, there are things that are unrelated to load order, so, it's more important to remember to disable parts of Beautiful Doom that you don't want intruding on the other mod. I.e. if you play it with a weapon mod, you need to disable Beautiful Doom Weapons regardless of the load order.

ist his for every doom wad?

As long as you play under GZDoom 4.5.0 or newer, it should be compatible with more or less any map pack or even other mods. But for some specific cases you may need to tweak compatbility settings under Beautiful Settings in the main menu. For example, if you want to play with a map pack that defines its own monster replacements, you'll need to disable Beautiful Doom Monsters option. (I may write a separate instruction article on this later.)

thx for your reply.

Jekyll, you should add a global warning that this mod causes a brutal and almost unplayable amount of slowdown in the secret map of "Master Levels for Doom II", more specifically "Bad Dream". Only saying this because Master Levels is an official campaign.

The global warning here is that some maps that cram a bunch of stuff together won't work well with mods by default, so Bad Dream falls under that warning. There's not much I can do to make it playable out of the box, but there are options you can use. I recommend disabling debris and gibs to play something like this, it'll work fine. The issues mostly result from how bouncing debris interact with moving planes, and trust me, it'll occur in basically any mod with debris. Having performance options is the best I can do for extreme cases like this.

Sorry, no. Aside from not willing to blow up the filesize and not being a fan of HD stuff, the amount of work that would be required to implmenet all additional effects, extra animations, deaths, etc. in HD is not something I can manage, especially in my spare time. The original spritework I'd put in the mod already took way too much of my time. Also, this engine is not great at handling HD assets of any kind because it can't dynamically load and unload them, in contrast to modern games, so HD graphics will eat through the user's VRAM very quickly, and the resulting performance likely won't be great, considering all the other effects.
Also, I consider Beautiful Doom to be feature-complete. All further updates will deal with bug fixes, optimizations and maybe minor changes. I have other exciting projects to work on :)

Very good!!! I was waiting for this new version!!!

Hooooooo boy... lemme tell you, this ain't the final version.
There are a BUNCH of 'beauty' issues in this pack, mostly on the weapons side of things.

Pretty much any modern weapon has some severe spriting or coding errors, and so do the enhanced ones, let alone the help menu.

I recommend you playtest it yourself, you'll find a bunch of stuff pretty much immediately.

Feel free to join my Discord, we have a dedicated bug reports channel. It may be very helpful.

Will the magazines for reloadable weapons show up on the Alternative HUD in modern mode?

Please, make an option to turn off the custom HUD. I just want some better looking sprites to play with classic WADs, a lot of which have custom mug and status bar (like Eternal Doom or Memento Mori).

It's not possible to create toggleable HUDs in GZDoom, unfortunately. I may remove the HUD altogether in a later update. For now you can use SLADE (or another archive manager) to open the mod and delete the SBARINFO file at its root to get rid of the hud.

A new version will be released today that contains a fix.

A new version will be released today that contains a fix.

Trying to run this using ZDL and getting this error beautiful_doom_700.pk3:z_bdoom/bd_menu.zc, line 43: Function isGrayed attempts to override parent function without 'override' qualifier