The full mod from Filefront. Again I take no credit in the creation of this mod I just want others to be able to enjoy it. 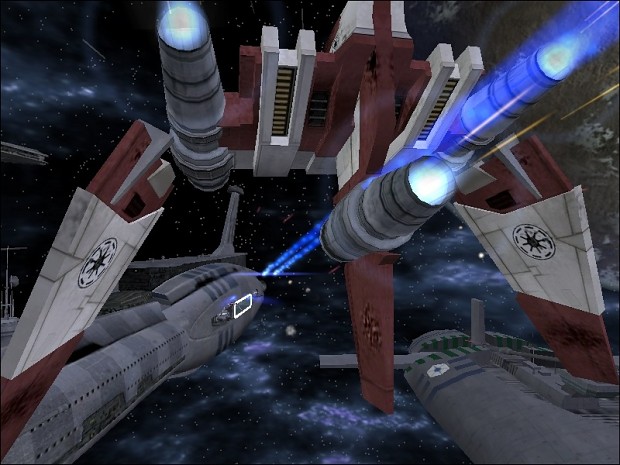 It is compatible with the 1.3 patch

Is everyone enjoying the mod?

New here... i just install this game in win 10 1.1 ,1.2 1.3 117 n 129
then bfx, all works except some new maps like bespin platforms ,did i miss something? it crashes after first screen appears the back to desktop. Most appreciate any help or suggestions is it working for you?

Yeah i have had the same problem

Many thx for uploading man.. This mod is gold !

Absolutely amazing, it is very good mod, gotta be honest.

Its great! everybody make sure they have the r129 version of the 1.3 patch, I had the old one and BFX wouldn't work without the updated update

how do you install this to game on steam?

Follow this directory C:\Program Files (x86)\Steam\SteamApps\common\Star Wars Battlefront II\GameData\ and put it in the addon folder. If there is no addon folder, create one.
(I don't have the Steam one, this is just from what I have heard/what I know.)

So...what the heck does the mod DO?
Why should I download it when I have no idea what id DOES?

Well, improved units, weapons...the same most of the mods out there do to the game..

GCW too? or just clone wars?

oh nevermind. it has both. i really like the mod even tho the dark trooper is white lol (no racist stuff intended)

Help! every single time I load up a bfx game it crashes, I downloaded the 1.3 patch on both gamedata and addon same for the conversion pack but it is still not working, someone please help me. Note that the KOTOR game mode works and the Fake console.

how did you fix it?

the setup will extract the files to a folder named gamedata

i have the steam version of the game and i installed bfx but nothing has changed. what can i do?

you need to install it into your steam folder. follow the instructions above in the description.

when it asks you where to install the mod, choose this folder: /C drive/programfiles(x86)/steam/steamapps/common/StarWarsBattlefront2

install all patches but the Besbin platforms not working and some other maps too anyone having that problem and can share a fix ? Also I had problem with not seeing b-wings but now its working ...i missed the v129 patch resolved that .

This mode is awsome!

Everytime i load a bfx map it crashes anyone know a fix?

Hey I had BFX in the past but I got a new computer and need to get all of the mods on my old computer onto my new one. I have been trying in vain to get BFX to work on this new computer, but I am having some issues. I install it and everything but it just will not work. I've heard this from other people and I'm just wondering if there is a way to successfully install this mod.

the way to install it is, when it asks where you want to install it, navigate to program files x86, then steam, steam aps, common and then JUST CLICK ON THE WORDS STAR WARS BATTLFRONT II. conplete the installation. You also need to do this for the convo pack and the patch if they do not automatically show up with this folder.

Hey guys! how do you add this era to all maps? it only shows up for the default maps but not the ones added by the convo pack or the 1.3 patch...
cheers

So I have the conversion packs. I also got the mod. But it does not give me the option to choose it as an era.

This mod isn't just gold, it's flippin' PLATINUM. A true legend! Thanks for bringing this mod back, mate!

So, I'm having an issue. I've installed the mod, and it works perfectly, but only with vanilla maps. I can't figure out how to have it work on custom maps. Am I just being dumb or does this mod only work for vanilla?

here is a description of the mod which can be seen when installing the mod:

This is the the final release of Battlefront Extreme. To install it, you must have installed Conversion Pack 1.9.1 and / or Unofficial Patch 1.3.

Most of the changes:

- Instead of overwriting the game's normal modes, BFX is available as two separate eras - BFX CW and BFX GCW.
- Multiple modes. BFX Conquest, BFX Hero Assault, BFX Hero CTF, BFX Space Assault, BFX Space CTF. (No BFX CTF due to compatibility issues.)
- Online compatible. BFX works online now.
- German language support, and every other language is localized in English.
- Greatly reduced file size. The BFX 1.0 download weighed in at a hefty 379MB. This version is about 1/3 the size. Very little content has been cut, and a lot has been added. The main file size decreases are a result of hugely overhauling the internal structure of the mod, and removing unused files.
- Localizations. All units have proper names, as do the weapons.
- Awards have been restored. NOTE: Not the award weapons, just the ability to earn awards.
- Clone Wars mode is available on Hoth and Endor, and Galactic Civil War mode is available on Geonosis.
- The AI counts and reinforcements have been increased on maps according to their size. Hoth and Kashyyyk, for example, have about a hundred units on the field at any given time, and have much more reinforcements.
- Many new weapon models. New grenades, new rifles, new lightsaber hilts, etc.
- All weapons and lasers do more damage, and lasers travel faster.
- Higher-resolution skins. One example: if you've played BFX 1.0, go play Utapau CW in this version and notice the difference in the clones.
- Most weapons have visible recoil now, and weapons with ammo can also overheat after prolonged firing.
- The "Overheated!" message has been changed to "Energy Depleted!" so it doesn't look out of place on certain weapons.
- The bug that caused firing a buff to lock up all your weapons is gone.
- The AT-ST bug is gone.
- A few new grenade effects. Also, the grenades now have a small blinking light instead of glowing.
- Force push, force pull, melee attacks, and grenades can be charged for greater damage or area, and force powers have a charge-up effect.
- A few force powers have new effects.
- Every Jedi / Sith hero except Pilot Luke has four force powers. (Pilot Luke has Force Push and Pull, and 2 proton grenades)
- Non-Jedi heroes are now much more powerful.
- Jango and Boba Fett have jump-jets (like Dark Trooper).
- Jetpacks last much longer, but take a fair bit of time to recharge.
- New jetpack effects, that actually look like fire. (Or plasma, depending on the unit.)
- Most vehicle skins have been modified for increased contrast, sharpness, and movie-accurate colours.
- Several starfighters have shielding.
- Starfighters are about 20% faster.
- Starfighter missiles do more damage, it was weird to watch a starfighter take a hit from a full clip of missiles and survive. They also have a nice trail effect.
- Stealth blinks a lot less often, and lasts for 20 seconds before running out (assuming your stamina is full).
- Flamethrowers are now secondary weapons. Note: You have to hold down the secondary fire button to fire the flamethrower, you can't just press it.
- Jango Fett and the ARC Captain have dual pistols.
- New blaster impact effect. Looks pretty good.
- Vehicle missiles now cost ammo. Use a fusioncutter to replenish your vehicle's missiles.
- Lightsaber combos have been modified so that the hero deflects while attacking. Also, deflect drains on a per-shot basis now, as opposed to draining energy over time. Blue lightsabers are a little darker in colour, too.
- Stamina has been changed so that it restores a good deal less quickly, and is consumed at a lower rate, so you can sprint for longer.
- Droids run a little slower than in BFX 1.0, for balancing purposes.
- The Support class (8 points) has been replaced with the Assault class. It's a stronger version of the standard soldier, with more health, a rifle instead of a carbine, a commando pistol instead of a standard one, and more grenades.
- The orbital strike ability has been removed from the binoculars. It was unbalanced, not to mention quite abnormal on indoor maps. A few recon units have orbital strike beacons that can be placed like a timebomb.
- Many units have been modified or added - the Novatrooper, the Rebel Commando, the Covert Ops trooper, the Twilek Spy, etc.

I really love this mod.Is there some way I could play it in Galactic Conquest?

Is there any way to make the mod overwrite the original classes and weapons and sounds so that the new features can be enjoyed in Galactic Conquest rather than in just Instant Action?