Aurlyn Dawnstone, the Reclusive Philosopher "I am Aurlyn. I have walked Tamriel for years uncounted, seeing nothing but violence and blood." "Perhaps it is time I take a more active role in shaping the world. If our destiny is to keep evil forever at bay, then so be it." Description Aurlyn is an Aldmer Dawn Sorceress from times long past, seeking peace and redemption in a world gone mad. Custom voiced with well over a thousand lines of dialogue, Aurlyn is designed as a game-long companion, as well as a tragic hero, on her own quest to seek a lost ideal, and unravel the mysteries of her ancient past. She combines my dramatic writing style with a deluge of interesting topics and conversations, making her a truly memorable character that will walk beside you as you fulfill the prophecies of the Elder Scrolls, and reshape Tamriel. Aurlyn possesses a rich and unique backstory, advanced commentary on most notable locations and a fully-fledged array of relationship dialogue. 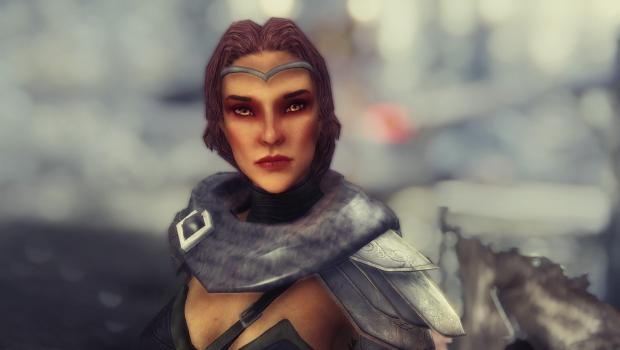 A huge thanks to selenameeka for writing this general troubleshooting guide, and giving me permission to pin it/ post it here.

If You’re having trouble with a follower such as Aurlyn, Virelda, or any other Custom Follower, please read below before asking questions. This will allow you to go through a checklist of help so hopefully the problem can be solved quickly, and it will also tell you what we need to better assess the situation you are having. All mod orders are different and troubles mean less play time for you. We want to make sure the issue gets resolved as quickly as possible!

First issue: Follower Overhaul Mods Overhaul mod: Any mod that overhauls part or all of a follower, region, or the player character. Some popular follower overhauls:

Retexture mods (new hairs, different faces) have little impact on the follower UNLESS they change vanilla IDs. This is usually just a bad edit and can normally be fixed. If your retexture mod isn’t working, ask us directly and give us your load order. Also, completely uninstalling the mod and reinstalling it or reinstalling it over the corrupted part might work.

NON-Overhaul Mods: If you have no mods like these then place the Custom Follower near the bottom of your load order. He/She doesn't have to be last as there are other mods that should take that spot, but having them down in the load order allows them to be loaded after some other mods that could possibly be causing a conflict. Loot and BOSS sometimes puts followers up high on the list. This doesn't always allow them to work properly, especially depending on your load order. It's safer to put them nearer the bottom. If you've done this and it’s still not working, skip the next paragraph and go on below.

Overhaul Mods: If you DO have mods like these, which is normal, place the Custom Follower BELOW that mod. I have found that most of the time for me it doesn’t matter if the Custom Follower is above or below the overhaul unless their are other mods that could cause a conflict. If another mod conflicts, I move the follower below the overhaul and it usually works. If you’ve done this and it’s still not working, go on below.

Second Issue: Dialogue Options Does the follower give you any dialogue at all, or are you simply missing the dialogue options to follow? Some followers require you to “chat with them” before they will give you the option to ask for them to follow you. Aurlyn, Serenity, and Virelda all require this. Their dialogue options are also not typical; they don’t say “Follow me, I need your help” or something generic like that. But it is very clear what the wording is asking the follower to do. You just have to explore their dialogue a little first. Also remember that new dialogue options light up. Some light up on the first menu with new choices, sometimes you have to click an already used choice (it’s dim) to get to a new answer. If you have exhausted this, go on below to the fourth option.

If you’re missing dialogue, put the Custom Follower below any follower overhaul mods, especially ones that edit dialogue (like EFF). This should fix the problem but also allow the follower to be managed by the overhaul. Not helping? Go to option five.

Third Issue: Animation Options Do you have a custom skeleton installed with custom animations? Most should work just fine, so long as the MCM menus and the FNIS generator have been configured properly and are running. But if there are problems, these two choices might help you.

This video contains everything you need to know about getting it set up and subsequent patching. If you have no animations and everyone looks like T’s, this is probably your issue. Either something isn’t set right or you didn’t update the patch when necessary.

MCM Menu: This is basically custom to every mod user, so I'll just go over the basics here. This is for if the animations you have are loaded properly but not displaying. Go into your MCM menu and open up your skeleton’s tab. Inside there will be another link to the animations. Click on that and in each section choose what animation you want. MAKE SURE TO APPLY IT TO NPCS! There is a separate NPC box and subsequent choices for them (same choices as yours, but they do not have to use your choices you’ve applied to your player character). You might need some testing to see all the animations if you have a lot of choices. Once satisfied save and go back to your game. The animations should work immediately.

If you’ve done these two and it doesn’t work, skip to the bottom and give us a copy of your load order along with all animation files you are using.

Are you using both Wrye Bash and TESVEdit to patch? It's a long shot, but there could be another conflict going on and it's just messing up other things.

If you do these already in the proper order then disregard this and go below.

Fifth: Fifth: When All Else Fails

If it still isn't working, and I hope it is working for you now, go ahead and send a copy of your load order. One of us can possibly look at the other mods and see if there are conflicts and get back with you. Also leave any questions you have with it. We will get this figured out!

Are you planning to port Aurlyn over to Skyrim SE? Thanks.

Yup. She's there now, and I just fixed the CTD issues in the same with the SSE 1-2 file, up on my website, and the Nexus. Feel free to get it; thanks!