Atlas Mod is a Mod designed for Command and Conquer: Generals Zero Hour that allows the player to play as a newly created faction or general called Atlas General. The Atlas General makes use of advanced versions of the best units in the game and can be described as a buffed-up version of the Boss General. For new units and capabilities of the Atlas General, take a look in the Features section. Atlas Mod also allows the player to play as the old Boss General in Skirmish Mode which is originally unavailable in the game. However, none of the two new Generals have AI capability, which means they can only be played by a human. Some very cool additions have been made in v2 of the mod, so make sure you download the latest version!

NOTE: The Atlas General is based heavily on the USA side. Most of the units belong to US Generals, but some units and features also come from the Chinese side. There are some unique units as well not seen before in the game. These features are only available in Atlas General:

- Make a copy of this directory and name it Command & Conquer Generals Zero Hour Atlas
- You should now have 2 Zero Hour directories, an original ZH and an Atlas one.
- Extract the contents of the folder "Atlas Mod v2" to your new ZH directory.
- Replace all files when prompted.
- Run the generals.exe file inside the Atlas Directory
- Have fun!!!

Special Thanks to J.C.D for the splash screen! 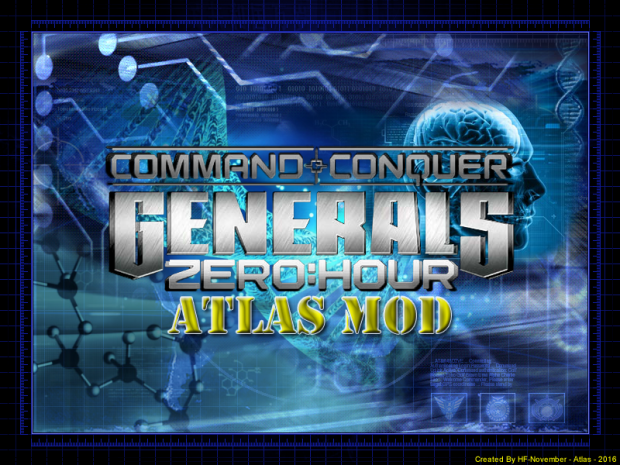 Give me credit for the picture, please.

Special thanks were given in the descriptions of the mod. Thanks!

The mod is meant to be lightweight and small. It's only a one-faction addition. Since I am only one person, I cannot create very large mods with lots of units and factions like Shockwave or Contra. I will try to add new units and capabilities to the Atlas General in the future, so if you would like to make a suggestion, please go ahead!