This is the original plot developed by Brad King. It may have changed slightly since this was written but generaly this is accurate. Storm Patterson stood at the crest of a hill overlooking the Greater Los Angeles Sprawl. The sun was just rising now, setting the dust-choked skies aflame with color. It was I+3, Three days after Impact. Three days after the end of the world. To those who saw the comet's impact, it was a blue-white bolt from the heavens. And Hell came in its wake in the form of a mutanagenic virid they were calling Hellspawn. The impact had scattered the virid into the upper atmosphere where it floated invisibly down to wreak havoc on those who had survived. The virid twisted its victim's bodies and minds and forged them into homicidal killing machines who knew no fear, only the desire to kill. Storm had already killed a dozen of the brutes, but his luck was running out. He too had contracted the virid. His only hope lie in the wasted city before him.... .

9/12/97
=======================================
Title : After the Fall - Final Release
MAKE SURE YOU READ THIS BEFORE MAILING US WITH BUGS AND STUFF!!!
Authors : The ATF Team.David "HotFat" Biggs.
dbiggs@yoyo.cc.monash.edu.au
Head 3d modeler, skins, html, PR,
Almost all models and most skins.Alexander "Shogun" Cohen.
shogun@compsoc.cs.latrobe.edu.au
QuakeC, textures, skins, graphicsDouglas Magee.
dmagee@flash.net
Head Level Designer.
e1m1,e1m2,e4m1,e4m2,e4m3,e4m5,e5m2,dm4Marc "Gear" Roussel.
gear@videotron.ca
Level Designer.
e2m1,e2m1,e2m3,e5m1,dm2.Llewellyn "Slannesh" Collins.
3d models and Levels.
Cyclops, some weapons.
Russel "Krusty" Hayward.
russel@vision.net.au
Level Designer and some skins.
e1m3.Others that helped out
Brad King.
The Original Plot."Shiro".
neogeo@hotmail.com
laser model and RPG model.Scott Fanetti.
ScotShot@aol.com
Minion Skin.Kevin "Fragmaster" Bowen.
fragmaster@planetquake.com
Some sounds and got us the Web page..Geoff Phillips
binky@DeathsDoor.com
Wrote some wad tools especially for us.
Email Address : aftershock@dags.cc.monash.edu.au
URL : Planetquake.com
Description : You are Storm Patterson. The World
has become overun by gang wars and crime.
The world it hit by a meteorite, resulting
in a lethal virid being release upon the earth.
You must find a cure to the virid and survive.

18 new levels.
112 new models.
100's of new sounds.
Over 400 new textures.
Max Size progs.dat
Virtually Everything Replaced!
It even has features Quake 2 doesn't!
Thanks to : The guys at id of course and all the
people on the net that gave us great support
over the last months of developement. And to
planetquake for hosting our site at
Planetquake.com. Also Nakedman
and Flood for maintaining Cool TC news
sites. A special thank you to the people
makeing quake utilities like WorldCraft,
Quark, Qme, Quest, Meddle, and many other
application we used for this TC.
=========================================

No extra impulses have been inluced so there is no need to bind keys
or anything annoying like that. Just use your normal quake config and
go kick some butt!For more info check out Planetquake.com
What we ran out of time on but were experimenting with..Environment based footsteps..
ie different sounds depending on the floor surface your on.
Movies.
We had planned cutscene movies but simply did not have the time.
We had planned several and even wrote the scripts but we wanted this
out before quake 2 :) 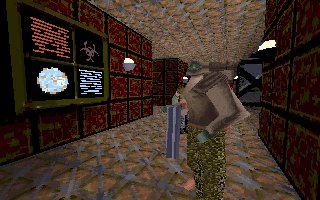 After the Fall Quake
Related Games