USS characters in their DLC costumes/recollours. the title is "BETA" because i can't change Vector for some reason. so it has only 5 DLC costumes. (this does not unlock the costumes it's a model swap!) every time i changed vector the game couldn't start. the game crashes on the capcom logo all USS members in their DLC "costumes" mostly they just have different collours and umbrella logo's switched. has all characters (besides Vector in their DLC costume) this mod changes the characters.swb2 file in *orc root folder*\dlc\pack1\characters\ so back-up that file before using. i have 5 characters working now. working on Vector. working for players.. also working for AI versions. works online. but others don't see the DLC costumes unless they use the mod aswell v1.1 fixes the zombie bug i had with bertha lupo and foureyes. now visible zombies and no longer crashes when killing the zombies 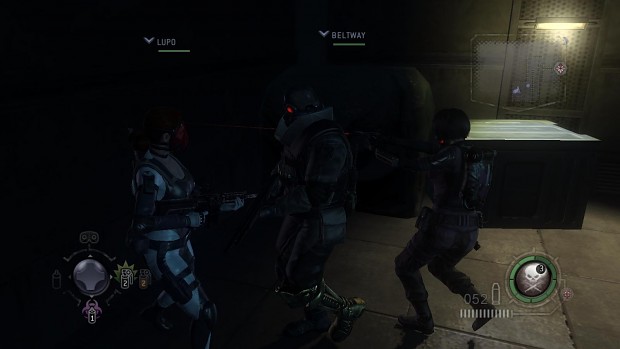 Bugged -- don't bother. The night vision goggle's character's arms are twisted behind his body... like in The Exrocist! xD