You are one of the last surviving rebels in a war-torn city after a prolonged combat against the Combine. The main Citadel has been destroyed giving the Resistance a high ground in the battle while leaving the Combine forces disorganized without proper communications. Because of this as well as the rebels' persistent resistance the losing Combine had decided to use their last resort, the headcrab shell bombardment, consequently causing a zombie outbreak. This counter measure has caused almost the whole population of the city to turn into zombies including a considerable number of Combine Soldiers, as well. Right now there are still some small isolated Combine squads remaining in the region. Since the shelling, you have been staying alone in an abandoned and half destroyed house for a short time. Though at this moment, you have decided that it's finally time to try and escape from the zombie filled city and find a new and better place to live in.

This is a single-player mappack of 3 maps.

Then open the game and type "map street_hazard_1" into console without quotes to play the map. 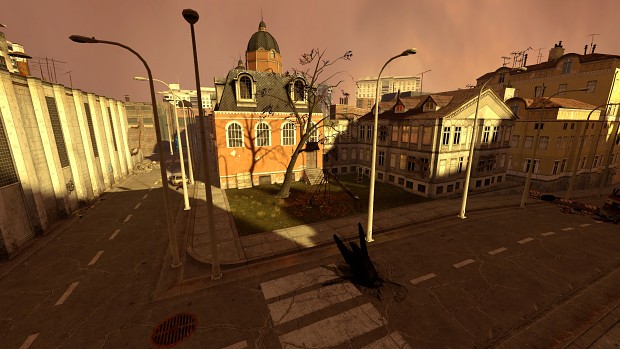 I've always wanted to play a semi-open zombie survival map in Half-Life, and this is actually pretty well made in terms of level design and city feel.

I wish I could set the difficulty before starting the map cuz it was never as tense or difficult as I would've liked it to be, but I'm not sure how much of that is Half-Life 2 itself. In the same vein, some of apartment interiors and a few others begin to feel repetitive, but as you go forward you end up in some pretty interesting places.

This map is absolutely beautiful. The city and building layout, as well as the minor details, are incredible. However, I feel that it was quite confusing. There were many paths to take and I got kind of lost at times. Otherwise, great map, would love to see the other stories you come up with.

I actually cheated just so I could see more of the map (I do level design as a hobby). However, at the end, I got kind of lost on the traintracks. I fell down that rail bridge, but don't know what to do from there.

Probably one of the best map packs I ever played, kudos.

This is pretty good. I can say that the final fight is a little too long.

The game does not end correctly. The 2 guys in the train station and the engineer
in the train do not talk. Also, no zombies break through the barrier. So nothing happens after that.