First edition based campaign. White Dwarf. The campaign will feature non-psycher hybrids for a change in tactics. Tough to balance the missions, since the original campaign features a Captain, and high-level Librarians to compensate for the psycher hybrids and the Patriarch. Just replacing librarians for Assault Cannons often makes the Marines too powerful. Also some missions have a double objective, and marine reinforcements arriving after some turns

Two squads entered the Sentinel's docking bay, situated on Level Two of the space station. Their orders were to clear the way for the rest of the force and set up a bridgehead. Once they had gained a foothold, Captain Jacobus himself would bring in the third squad. If this mission was not a success, the whole operation was doomed.

As the landing shuttles approached the docking bay there was no sign of resistance. The lights were all dimmed, running on emergency power only,casting a blood red glow over the area. Warning beacons pulsed at theedges of the bays and shadows of the torn machinery leapt and shuddered in their intermittent light. Long seared lines of laser fire scarred the deck but their was no sign of bodies, either of the invaders or the Sentinel’s crew.

The two squads disembarked and moved into position. As they approached the entry corridors to the station, their scanners started to come to life: telltale blips showed the enemy ahead. Sergeant Amadeus reported to Captain Jacobus - it was safe to bring in the second shuttle but there were enemy forces just beyond the docking bay. The Space Marine readied their weapons and advanced.. 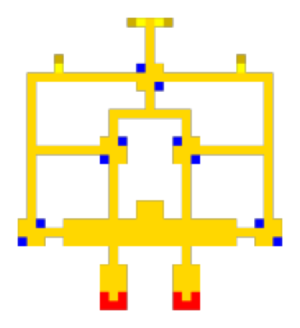