This is Ryloth: Nabat by THEWULFMAN, a map inspired by the planet of Ryloth from Star Wars: The Clone Wars Season 1. The map is based on the war-torn city of Nabat where the Twi'leks were captured by CIS infantry resulting in a Republic mercy mission lead by General Obi-Wan Kenobi and Ghost Company of the 212th Attack Battalion. The map itself is very faithful to the appearance of the city in the TV series with both sides spawning on opposite ends of the map, separated by the city center which offers a good sized urban battle with lots of cover and strategic points. 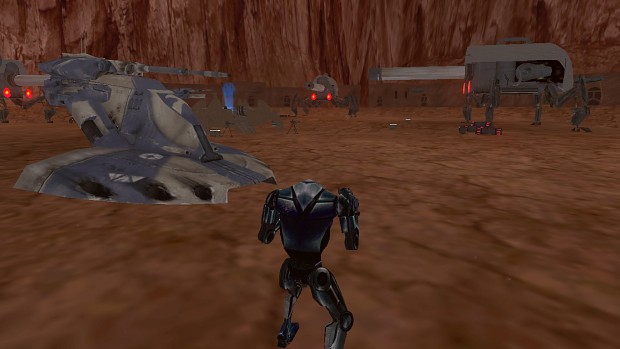 Another map almost accurate from "The Clone Wars" TV show.

I love the fact that people still make great mods for this game.

yet they dont appear on moddb for 5 almost 6 years? Still new

This map was originally released on Gametoast and SWBF Files all those years ago. Just because it is appearing on ModDB for the first time doesn't make it all the sudden new. Notice that the person who uploaded the map here isn't even the original map author.

lel... then I love the fact that I still discover new and exciting maps to play in.

i read this with mace windu voice and was fun

I never uploaded this to Mod DB because I didn't feel its quality was good enough. If anyone likes this poorly done 5 year old work, more power to them. It was my first released project, it's nothing amazing.

guys does this mod or any other work for star wars battlefront II v1.0 ? also i downloaded it from pirate bay so i don't know if it makes any difference

again thank you for posting this!

Please can you do the battle of ringo vinda?

Yeah. That would be epic!

Does anyone know why hunt mode crashes?