By -]K6[-Grimm & BU|D>ToX ************************* This is a remake of the map mp_rundown from modern warfare 2. We tried to keep the map as mod friendly as possible and the map was also tested on a linux dedicated server, it worked, if it does not work on your linux box then I am afraid there is little that can be done to fix it as we optimized everything to the limit. Set in a Brazilian village, the maps is divided by a small river. Sadly, the local townsfolk, out of fear of the bird flu epidemic have rid their village of their potential threat. They hastily gathered all of their feathered friends and set them a blaze just down the river from the main village. It was an amazing spectacle of flames, fury and fowl. The feathery abomination was visible for miles and lasted three days....you missed it. So before you ask "where are the chickens"...they're dead...get over it!

oldschool is NOT supported.

copy the folder and all files contained within to the
Call of Duty 4 - Modern Warfare/usermaps/
directory.

map shortname for your server config is: mp_rundown

If the folder does not exist, create it

Tested on both windows and linux dedicated servers, even with the large
filesize it worked.

No we cant make the files any smaller.. we tried

This map is M.I.P protected, do not change the contents of the IWD file!

Infinity ward for the concept and textures and models. Thanks for the
dedicated servers in MW2 BTW.. no wait err...

Thanks to Zweimann for his dynamic foliage script!

Thanks to HolyMoly for his Map integrity check script!


Permission is granted for any files in this map to be used in any way as long as proper credit
is given to its original Author.

The author's of this file in no way excepts any responsibility for damage to data(software),physical damage
to hardware or physical damage to any person as a result of the appropriate or inappropriate use of this file.
It is deemed that users who run this file are automatically considered to have read and understood this liability clause before using the aforementioned file. 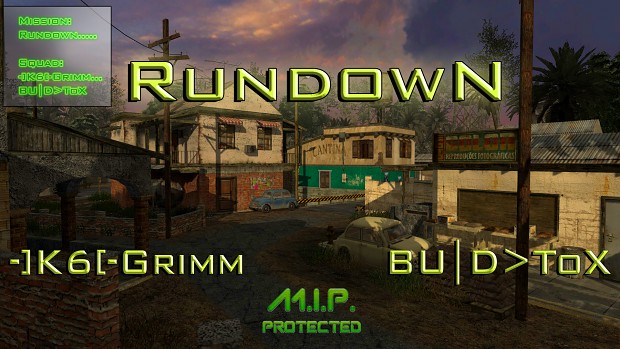