This mod works best with F.E.A.R. Combat but works fine with the Retail version also, make sure your up to date also with the patch v1.08. A Mod For F.E.A.R. Combat or F.E.A.R. Retail that pays Homage to Quake 1. With weapons and the Ranger from Quake as well as 5 Multiplayer Maps.

First off thanks for taking the time to download
this mod.
As many of you know I have always been a big fan
of Quake and in the past released some of the maps
found in this mod for F.E.A.R.
After some time, and managing to muster up the
willpower I have constructed a small mod based on
Quake 1.

It's not 100% accurate but hey it's a decent
homage to the original.
Veteran "Quakers" will notice many differences,
especially in the revamped maps.
The lifting platforms and sliding doors have been
removed to help optimize the performance of the game
due to F.E.A.R.s client side based netcode...bleh.

Powerups such as the ring of invisibility never made
it in due to issues found in earlier testbed maps such
as Q3DM1.
The Quad damage has been reduced to a Full Armor and
Full Health powerup.
But!! the Pentagram of Protection remains, and is good
for 30 seconds.

This mod took about 2 weeks to put together, and there may
be some updates and map additions in the future, but with
F.E.A.R. 2 right around the corner it is dependent on
my time as well as requests to do so.

(This mod works best with F.E.A.R. Combat but works fine with the Retail version also,
make sure your up to date also with the patch v1.08)

First things first I'm a lazy bastard, so no executable.

1.> inside the Quake_1.01.rar file you will find all you need
to install the mod.

to aquire your CDKey.

Now your ready to go ! One last step !

you will find a batch file called Quake.bat
use this to launch the mod

Basically you will notice mostly some changes in the overall look of F.E.A.R.
to give it a more quake 1 feel.

The hud has changed only a little....
Health is still found in the lower left hand corner, represented by the
Ranger's Face and a progress bar.

Next to the health is a Armor icon with a progress bar representing Armor.

Located in the lower right corner of the screen is the current ammo type
of the weapon you are using.
The types of ammo that can be found are as follows:

Shotgun Ammo - for use with the loadout shotgun and the double barrelled shotgun.

Nail Ammo - for use with the nailgun and the supernailgun

Rocket Ammo - for use with the Rocket Launcher and Grenade Launcher

Cell Ammo - for use with the ThunderBolt aka Lightning gun

There are no more hand tossed grenades of any type.... if you run this mod with maps
that contain these , such as stock maps or custom maps.... the results will more than likely be
unpleasant. This also pertains to the Stock F.E.A.R. guns as well... This mod is setup for
the 5 maps within the mod only... and perhaps a future release of maps.

Weapons in this mod have been reproduced to act like the original weapons,
use each one to find strengths and weaknesses.

Within the Multiplayer Client Setting section you will notice a new player
Model, The Ranger. There are 12 different skins for Deathmatch games.

Team Characters are Red based, enemies appear as blue versions.

Everything else is basically fear related...as far as setup etc.

All the maps do support all gametypes except the aforementioned Q1DM1


One more thing, Desriptions in the game are setup for English only, if your French,Russian, whatever
the descriptions will be as they are in fear .... I am not multilingual...... lol

Myself... for having the willpower to put this together....
Layer and The_One for cheering me on....
and last but not least my GirlFriend who I really think hates this stuff.....
And the Fear community and players like you for playing this stuff ! 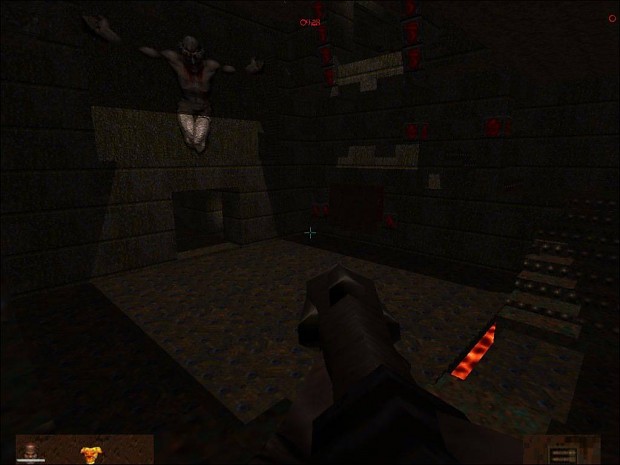 this is so dumb im in love with it

Why is this listed as prefabs? Does it contain source files?