Just Massive Entertainments WIC and 'armyguy277' for giving me some great feedback!

Story The Soviet Invasion Fleet is moving southwards with temporary naval escort towards Seattle, shadowing the U.S coastline to evade the U.S Navy's deep water patrols. They have manoeuvred to Middleton Island's Air-force surveillance base 278km's south of Anchorage to prevent early warning of their invasion.

Story
The Soviet Invasion Fleet is moving southwards with temporary naval escort towards Seattle, shadowing the U.S coastline to evade the U.S Navy's deep water patrols. They have manoeuvred to Middleton Island's Air-force surveillance base 278km's south of Anchorage to prevent early warning of their invasion; due to the nature of the base being solely dedicated to aerial detection the Soviets have caught them completely by surprise; using the battlecruiser Admiral Lazarev ( launched 1981 as part of the pacific fleet)the Americans soon lost their communications after it knocked out one of they key Satellite dishes and power station with a series of SS-N-14 missiles.All civilian and intelligence personal have been moved underground, reserve units have been mobilised and are ready to defend against the Soviet attack or else the invasion will go on and West Coast shall fall.

-------
My Brief
I have tried to replicate the base to the best of my ability, all information above has been researched thoroughly and is true ( well technical details, climate, weapons and base structure). Some buildings and areas I have had to innovate by using WICS given object so though the building may not look like the real one but it should do the trick.This is my first map so forgive any bugs and just post the problem on the wall and I will get on to it and reupload a newer version ASAP.I know the ground textures do not blend as well as they should, control point distances may be a bit unbalanced and such but I have done it as close to the real base as I could.Any suggestions or constructive criticism would be greatly appreciated as I am no EvilViking :)
-----
Help!
Also I was stumped as how to make:
Beaches
Bridges that pathfind
----
Thanks!
I hope you guys enjoy the map, it will be the only one for a while as collage is starting up again for me in a few days!Oh I also hope you find the Easter egg I left floating about :D
Flames09 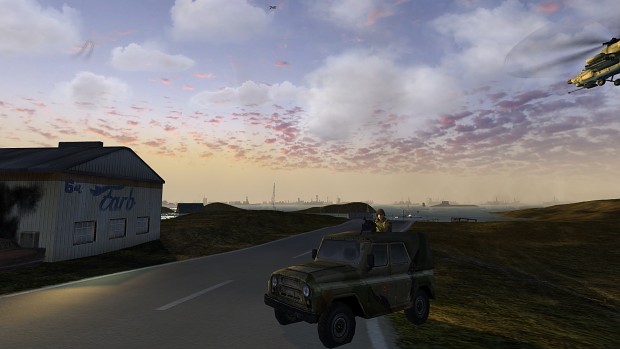 Hey guys, just letting you know I am starting work on a new map. Based on the limited war in the Falkland Islands during 1982 between Britain (including some of her colonies) and Argentina (using the Russians instead).

I will spend about a week researching the battle of Goose Green where the British 2nd Para assaulted Darwin and Goose Green both small settlements. I shall spend some time looking at the field of play and how I can make it fair as well as the height maps and such.

I will release a version with Nato for vanilla users and other mod users and one with the Americans for those (like myself) who enjoy the modern warfare mod.

It may not be very accurate due to my inexperience with the editor but I will do the best I can!

wow! haha thank you so much :D. I am not sure what happened to the objectives as I was sure I got the names going on, I probably forgot to test that sorry anyway.

The pictures I had a go at doing ( I assume you mean the loading screen thing) but it required some sort of coding that I did not understand, the picture files ares sorted it's just implementing them into the game which I had trouble with.

I will probably leave this map for a while as I am working on the above battle of Goose Green in the Falklands, however I assure you that the naming of objectives and loading screen + music will definitely be in there before I release it.

Thank you very much for your feedback!

mm yea Sorry about that, in this map I was going for cosmetic realism as I based it off a real island, in my next map it will be far more balanced with both sides being in good positions.

I will also make sure that cover is adequate for both sides considering the area of Goose Green is very flat and empty apart from a village, so I will great small hills and some clutter.

Heavy Armour with decent Mobile AA will dominate it, without the AA support Air will have its way, Goose Green will really rely on co-operation between players, bots should be able to manage though.

Oh and I will go and edit the starting positions now for you :) be expecting another upload of this soon minus the intro screens.

Yes, if you keep on making good maps there will be a spot at the WICMMT open for you.