This is the last, finishing level for Z-Hunter. I thought that this mod lacks for an epic grand finale and ended up inspired to make it.

Our scientists deciphered the ancient manuscript. It says that there is an artifact which can cure zombies. This is our last hope, humanity's last desperate attempt to recover from disastrous pandemia. Your mission: find this artifact in the ancient temple and activate it. Be aware: long range scans of that place show nasty deathtraps and hideous mutants. Going there is practically a suicide, but we don't have any other choice, so prepare yourself well.

Just copy the file zz_level9.pk4 to your Doom3\Zhunter folder, and it will launch during your next playthrough after you complete level 8. Or press "Ctrl" + "Alt" + "~", type map z9 and press "Enter" to start right from the new level. 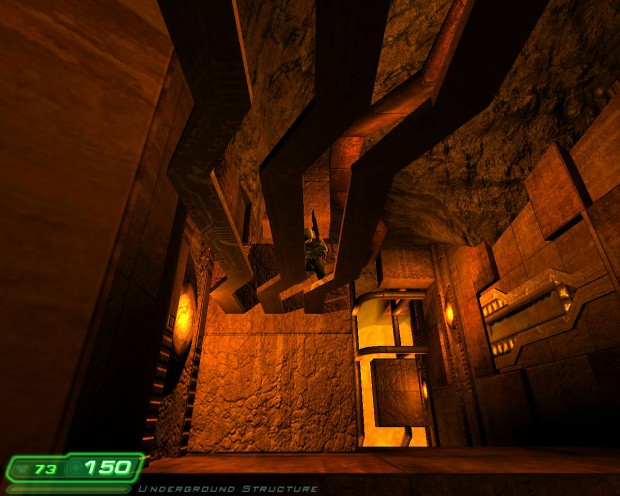 After playing Salvational Temple, I thought I should write up what I thought about it, some good points and some bad points too, but mostly positive.

It's definitely worth playing for anyone who has yet to play it, even though I don't personally think much of the Z-Hunter mod in general, this map made it an enjoyable experience for me and it has good visuals, atmosphere and plenty of variety that kept me playing and interested in what will happen next, and with that anticipation it certainly delivered. It was fun and didn't feel like a job that needed doing, which a lot of other stuff feels like to me. A sign of a good mapper is to create an environment that the player actually wants to explore, and not just plot out a world to send the player on some task, because that attitude will definitely translate from mapper to player and it's rarely fun to "work through" a "job" that someone else has set. The enjoyable-exploration factor can only come from a decent imagination, and I'd say that the author of this map (NX-317) definitely has this kind of imagination and it shows through in the work he does. (cont...) >>

The map has consistent details and consistent performance, which made it seem like a professional effort in contrast to a lot of other maps, including others by the same author. It's obvious that a lot of care was taken to make this particular map both perform well and look great. The beginning desert area has very nice atmosphere with the lighting and choice of textures. There are really nice structures along the walls, good brushwork and use of textures for all of those details. The brushwork seems very innovative and isn't repeatedly the same "do it just like 'id Software' did it" kind of approach, but a more unique and original approach to everything which I really appreciate. It's nicely broken up with the laboratory section (although that seemed a bit obviously "teleported" into) and then into the underground lava section, so the entire map remains fresh and becoming split into some new visuals just at the point where the player could use a change of atmosphere, the intuitive timing is great in that regard. The cutscenes, though there are very few, are extremely well done, especially toward the end with the main Mancubus cinematic. (cont...) >>

I do have a few complaints though. There are very nice puzzles and traps throughout the map, but the trapdoors at the beginning makes it extremely difficult and frustrating because I died even though I didn't fall into them completely, it's like I instantly died from having my toes crushed. The corridor after falling down the trap at the beginning makes it difficult to see what's going on behind the wall, where it could have used better brushwork there with some gaps. Where there actually are such gaps, they are a little too "no clip" in appearance and perhaps could be more stylised with intentionally placed slots in the brushwork. Especially at the beginning where first impressions are important, this approach would have done a lot to make it a better experience visually for new players and sensitive first impressions, as well as gameplay-wise, although the map gets better in this regard as it progresses. There are a few too many Cherubs, Lost Souls and Cacodemons, not a lot, but they are difficult to shoot because you cannot aim up and down, they take extra long to kill when compared to every other enemy. Some of the areas are very difficult, such as the part with the Pinky Demons in the small room or the twin Hellknights with the Archvile, these are monsters you don't want to get too close to, yet in this mod you are forced to be near them in order to inflict any damage onto them at all. The pressure-plates you need to step onto to unlock/open doors elsewhere could have used some kind of visual cues, maybe there was audio but I played the map silently, and something visual would have been very good and helpful to see, some use of particles to show that something has actually happened. (cont...) >>

Some of the model placements, like the "hellgoo", weren't very well positioned, with its decals hanging in mid-air and looking very seamy. The lab room with the crazy red light could have used better lightshader/better placement because that caused ugly streaking on the walls. Some custom geometry doesn't look too nice, although innovative, technically they are faceted and badly textured, such as the 'pots" toward the end, but still a nice attempt at unique features. Finally, the ending seemed a little confusing and I was surprised it was actually the end, although I don't know how it could have been done better, it took a couple of plays to get the feel of it, somehow the ending was abrupt and unexpected. (cont...) >>

To summarise, despite a bunch of issues and complaints, it's really a lot of fun, innovative and looks great. It has fresh and interesting visuals, great atmosphere and nicely executed ideas throughout the entire map. For the most part the action is well paced and never feels like a tedious task that needs doing. This is probably the main point I wish to get across because so much other stuff out there, even in games from professional studios, feels like its a job set out and I need to perform the task of navigating through it. That's never fun. NX-317 knows how to avoid that by enjoying what he does, so we as the players can enjoy it too. It's a nice map to explore and there are some excellent features such as the trapdoors, crushers and moving platforms you need to jump to. I would have liked to see more of that because I like it when not only the monsters in the map are against you but the map itself is alive and trying to kill you. The author has a nice sense of this, not only different methods of how to do it but also when are where to put them in. It goes a long way to keeping the gameplay fresh and myself as the player interested in what comes next. So despite being a little too hard and a bunch of other little things I am probably overly-critical about (because I really did criticise everything I possibly could) this map performs, plays and looks great consistently.

I can only finish by saying that I hope NX-317 keeps up the good work well into the future! We need more maps like these.

Thank you very much for this review! It's very detailed, very valuable and very well written.

I predicted that some players won't like trapdoors, that's why I put them at the beginning, so once you complete it, they get out of the way. Also, they won't be that annoying after some practice at completing them.

The idea of making intentionally placed slots in the brushwork looks great! Seems like an excellent balance between Z-Hunter's wall behind which you can't see yourself, and "no-clip" approach that I've used from time to time.

Here are some things I would like to clarify.

You can easily kill Cherubs if you crouch, Cacodemons just fly towards you, so they're not a problem as they quickly get into your line of fire. Lost Soul is a real challenge, you have to get it in your line of fire. You can use crouching and jumping to make it easier. I even decided to make a battle with three Lost Souls skippable due to the fact that it might seem too hard to some players.

The Pinky Demons are a combat puzzle. You need to stand in one of three structures to prevent them from reaching you. Maybe it's not perfect, but I think it is still a lot better that Pinky Demons in Z-Hunter Level 2, where you either attack them in the open and take a lot of damage, or hide in a corner with 100% chance that they won't reach you.

The pressure plates without any feedback is a feature, not a bug. Don't know if it's a good idea or not, but that's what I wanted to do for originality - usually they have feedback, but these ones don't. That's why there's one of them at the very beginning - to teach the player - look, nothing happened with the plate, but the door has opened.

As for the ending, I did everything I could, and I don't know how it could have been done better, too.

Of course, everything has its flaws and to say that I have no complaints about this review is to say a lie.

"The map has consistent details and consistent performance, which made it seem like a professional effort in contrast to a lot of other maps, including others by the same author." This particular paragraph is too vague. You should have wrote there, which my maps exactly you're talking about here, and how exactly they are worse than Salvational Temple. When someone says a vague thought they have no chances to get their point across as vague info is too open for interpretation.

The criticism about red light and model placements seems nitpicky to me as I've never noticed these flaws, especially "ugly streaking" in that room with red light, and I don't remember anyone complaining about them.

But still, I'm very happy to see that you enjoyed the map and speak very highly of it and my abilities. Overall this review is one of the best reviews I've ever seen: not only it gives some very valuable feedback, but it's also very acute and shows a lot of professionalism. I enjoyed reading it a lot, and I hope to see more reviews from you in the future, because I feel that mod community would really benefit from reviews like this.

Got to play your map, it was pretty well done, the cutscenes were a nice touch, though the implications of a story weren't hinted at, so the finale was a bit unexpected. One thing to note, your level was WAAAAAYYYY too long, would've been better to split it into multiple chapters, there wasn't enough health to go around for a level that long. The fact that hard fights are also interspaced amongst instadeath pitfalls just adds insult to injury. Traps are fine, but only towards the beginning of the level. Overall, it felt like a nice conclusion, just way too long of a level.