Part One:The Legacy Duke is out to find an ancient weapon left by his ancestors but when he's goes on his journey he has alien company. When the aliens get a hold of the Mega Pulse Wave Ammo they develop their own guns to shoot these powerful weapons. Duke is then nearly defeated but sent back home only to find THE END OF THE EARTH IS NEAR!! The Duke 2000 Series is composed of a few parts. THE LEGACY, part one of the series takes place underground where it continues to an underground alien base. The Duke3D Map Collection- It contains maps from people over the internet. Use the batch file to play the different maps from "DUKERS" around the world. Look for later versions at the TIBURONQ ENTERTAINMENT WEBSITE.

THESE MAPS WERE NOT MADE NOR SUPPORTED BY 3D REALMS.
Angelfire.com
THE LEGACY TOTAL CONVERSION v1.0 FOR THE DUKE3D PLUTONIUM PACK
PART ONE OF THE 2000 SERIES

Duke is out to find an ancient weapon left by his ancestors but when he's
goes on his journey he has alien company. When the aliens get a hold of the
Mega Pulse Wave Ammo they develop their own guns to shoot these powerful
weapons. Duke is then nearly defeated but sent back home only to find THE END
OF THE EARTH IS NEAR!!

The Duke 2000 Series is composed of a few parts. THE LEGACY, part one of the
series takes place underground where it continues to an underground alien
base.

The Duke3D Map Collection- It contains maps from people over the internet.
Use the batch file to play the different maps from "DUKERS" around the world.
Look for later versions at the TIBURONQ ENTERTAINMENT WEBSITE.
_____
STORY
_____
ONE DAY THE WORST DEMONS OF THE UNIVERSE HAD A MEETING ON HOW TO TAKE
OVER THE UNIVERSE. THEY SAW THAT THE ONLY ONE IN THEIR WAY WAS DUKE NUKEM.
THEY ALSO SAW THAT A SPECIES OF ENEMIES HAD BEEN ATTACKING DUKE FOR YEARS
NOW. THEY DECIDED TO SUMMON THEIR MASTER WHO WAS THE QUEEN.
THE QUEEN AGREED THAT HE WOULD TAKE HIS SPECIES OF MONSTERS AND
ATTACK DUKE ONE MORE TIME. THE DEMONS GAVE THEM A SPECIAL POWER TO MAKE THEM
MUCH STRONGER AND LET THEM SHOOT SPECIAL WEAPONS. ONE POWER WOULD BE GIVEN TO
A SPECIAL TRAINED LIZARD TROOPER WHO WOULD LEARN HOW TO SHOOT SPECIAL WEAPONS
AND THAT IS ONLY ONE NEW POWER THEY GOT. OTHER POWERS WOULD BE GIVEN TO OTHER
MONSTERS TOO.
MEANWHILE DUKE NUKEM GOT A LETTER FROM A FRIEND WHO
SAID ONE OF DUKE'S ANCESTORS HAD LEFT A SPECIAL WEAPON FOR HIM. IT WAS CALLED
"THE MEGA PULSE WAVE". BUT THE WEAPON WAS PRETTY FAR AWAY UNDER THE EARTH AND
HE HAD TO TAKE A SPECIAL PASSAGE WAY. WHEN HE WAS RIGHT NEAR THE ENTRANCE HE
HEARD THE SOUND OF AN ASSUALT COMMANDER WAITING ON THE OTHER SIDE. THEN DUKE
SAID "MAN, DO THESE GUYS EVER GET ENOUGH?" THEN HE CRACKED HIS KNUCLES,GOT
HIS PISTOL READY AND OPENED THE DOOR AND SAID "I GUESS NOT".

------USING THE CON-FILES, MAPS AND MUSIC------
You may use the CON-FILES alone only if you include a file giving the
credit to TIBURONQ ENTERTAINMENT with the website and e-mail addresses also
to get the new-enemies you can change the sprite-pal to the following
enemies. (To change the sprite-pal to a certain number goto BUILD, point to
the enemy and press ALT and P)

SINCE YOUR USING THE CON FILES YOU'LL NEED THE MUSIC AND THE MAPS.
(YOU DON'T NEED PERMISSION FOR THE GAME AND DEFS CON FILE. YOU'LL HAVE TO
EDIT THE USER CON FILE TO SO IT DOESN'T NEED MY MAP FILES.)
YOU MAY USE THE MAPS WITH MY PERMISSION. YOU CAN DO WHATEVER YOU WANT WITH
THE MUSIC.

THE MEGA LIZARD TROOPER- THIS IS A BLUE LIZARD TROOPER.HE SHOOTS MORTERS AND
OTHER THINGS. HE ALSO EXPLODES AND SPAWNS TWO REGULAR LIZARD TROOPERS WHEN
KILLED WITH A NON-EXPLOSIVE WEAPON. (HIS SPRITE-PAL IS 20)

THE FREEZER-ENFORCER- THERE ISN'T MUCH CHANGED TO HIM. HE IS A BLOODY
ENFORCER WHO SHOOT FREEZER SPARKS. THIS GUY IS TRICKY TO BEAT THOUGH....
(HIS SPRITE-PAL IS 24)

THE ULTIMA-JELLY-MAN- THIS IS A BLOODY ASSUALT COMMANDER WHO PRODUCES A
MEGA PULSE WAVE. IT IS SO POWERFUL THAT HE CAN ONLY SHOOT THIS ONCE SO
AFTER HE SHOOTS THIS HE WILL GAIN ALL OF HIS LOST ENERGY AND TURN INTO A
REGULAR ASSUALT COMMANDER. WHAT ACTUALLY HAPPENS IS THAT WHEN HE PRODUCES A
MEGA PULSE WAVE HE ACTUALLY BOUNCES(IT'S HARD TO SEE BUT YOU'LL NOTICE HE'LL
BE ON THE OTHER SIDE OF THE ROOM HE'S IN.
TO BEAT HIM DO NOT SHOOT HIM WHEN YOU SEE HIM.....
WAIT UNTIL HE SHOOTS YOU BECAUSE IF YOU DON'T AND YOU KILL HIM YOU'LL HAVE
PROBLEMS. AFTER HE SHOOTS AT YOU SO YOU'LL HAVE A REGUALAR ASSUALT COMMANDER.
THEN KILL HIM LIKE YOU WOULD KILL ANY OTHER ENEMY.
(HIS SPRITE-PAL IS ALSO 24).

MINI BOSSES- THEY'RE SMALLER AND WEAKER VERSIONS OF THE BOSSES. TO GET THEM
FOR BOSSES 1-3 CHANGE THEIR PALLETTE NUMBERS TO 21. FOR BOSS 4 CHANGE IT'S
CHANGE IT'SPALLETTE TO 10.-TIP- AT SOME POINT THEY'RE USUALLY WEAK AGAINST A
CERTAIN WEAPON.
__________________________
WHAT IS A MEGA PULSE WAVE?
__________________________
WHILE DUKE IS ON HIS QUEST THE ALIENS COME CLOSE TO THE PULSE WAVE GUN BUT IT
IS HIGHLY GUARDED. THEY ONLY COME BACK WITH WEAKENED PULSE WAVE AMMO AND GIVE
IT TO THIER STRONGEST NON-BOSSES. IN THIS TC YOU WON'T PLAY USING THE
MEGA PULSE WAVE BUT YOU WILL BE ATTACKED WITH IT. (LOOK FOR THE UPCOMING
SEQUAL COMING SOON).
THE MEGA PULSE WAVE CONSISTS OF MORTERS, RPG ROCKETS, MICROWAVE SHOTS,
SHRINK-RAYS, FREEZE-SPARKS, AND MUCH MORE. IT IS PRODUCED SO FAST YOU MIGHT
NOT BE ABLE TO SEE IT EVEN THOUGH YOU WILL SEE THE OTHER WEAPONS PRODUCED.
BEWARE OF THE PULSE WAVE!

-TIPS-
IF YOU ENCOUNTER EACH ENEMY ONE AT A TIME INSTEAD OF FACE THEM ALL AT ONCE
YOU'LL BE ABLE TO WIN. THIS LEVEL IS HARD TO BEAT. REMEMBER "BEWARE OF THE
PULSE WAVE"

LEVEL 5
AFTER DEALING WITH THE ULTIMA JELLY MEN DUKE GOES THROUGH A SECRET TUNNEL.
THEN ALL OF A SUDDEN HE'S CAN SEE ONLY ORANGE. AFTERWARDS HE WAS ABLE TO
MAKE OUT THE PLACE HE WAS IN. BUT HE NOTICED SOMETHING ELSE... THERE WERE
ALIENS IN THE ROOM TOO!
-TIPS-
THIS IS A SMALL LEVEL. IT'S ONLY TWO ROOMS LONG.
THIS LEVEL CAN BE HARD TO BEAT. USED THE EGGS TO BLOCK THE SHOTS THE ALIENS
MAKE. KILL THE MOON ASSUALT LEADER AND FIND THE TELEPORTER.
AFTERWARDS YOU MUST FACE THE CYCLOID EMPEROR. OUTSMART HIM BY LEADING HIM
TO THE TELEPORTER AND GO TO THE EXIT FAST!

LEVEL 6
THE FINAL BATTLE- THIS IS THE LAST LEVEL IN THIS VERSION. KILL THE OVERLORD
TO WIN THE GAME
-AFTER THIS LEVEL-
AFTER DEFEATING THE OVERLORD DUKE MUST ESCAPE. HE ESCAPES BUT WITHOUT THE
PULSE WAVE WEAPON. HE ALSO LOSES HIS OTHER WEAPONS. AS HE ESCAPES WEAPONLESS
HE SEES AN IMAGE OF THE QUEEN. IT SAID TO HIM "WE HAVE PULSE WAVE AMMO AND
WE"LL ARM EVERONE WITH IT DUKE. IT'S THE END FOR YOU." THEN HE SAW AN IMAGE
OF THE CYCLOID EMPEROR. IT SAID TO HIM "DUKE, IF YOUR A BADASS COME FACE US
IN THE FUTURE MISSIONS". IF HE WENT ON ANOTHER MISSION HE'D DEFINATELY BE
TOAST.
THE NEXT THING HE KNEW HE WAS BACK HOME. HE TURNED ON HIS TV AND HE SAW A
REPORT ABOUT HIS ENCOUNTER WITH THE PULSE WAVE. "I STILL HAVE TIME TO FIND
THE PULSE WAVE" SAID DUKE. HE GOT IN HIS CAR, LOADED HIS GUNS AND
WENT SEARCHING FOR THE PULSE WAVE WEAPON. 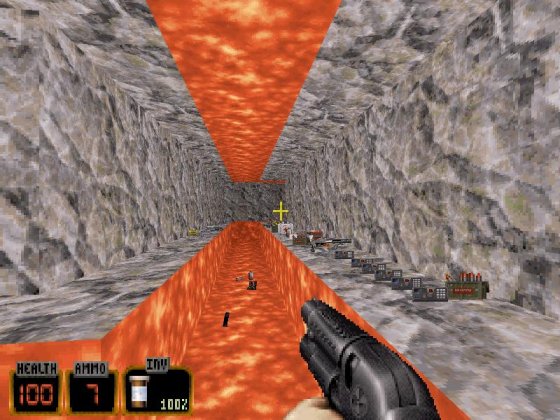