Hello gents, this here is a submod for the base version of Hispania 1200 that replaces the base map of the mod with one made by rgcotl, some additional changes include repositioning the parties, tweaking some scripts so the sea travel system from the mod works with the new map and a custom script adapted from TLD that prevents the mountainous terrain from generating terrible battle scenes. Other than that it's the same mod with a new map. The map itself is Open Source (non commercial usage only) but all the other files are propriety of the Hispania 1200 team and should you want to use anything other than the map you will need permission from them, this is merely a submod. The source code is provided with the download.

Requirements:
Download and Install the base version of Hispania 1200 (submods are not supported yet but if their source code is available I can port it over)

Credits:
rgcotl - Created the map
Dmitry194 - Helped tremendously with positioning the parties
Seek n Destroy - Did some stuff
Hispania 1200 Team (ElXabeodelaCova, JBJ, Hoju) for creating the mod
TLD Team - Some of the terrain textures
iJustWant2bPure - For the tree models and textures 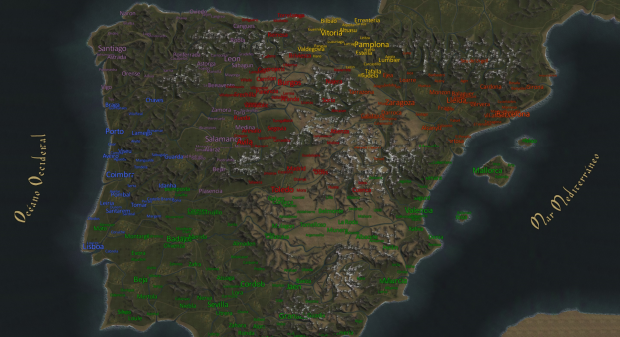 please, made this map for Hispania 1200 Reconquista

There is a version for Reconquista as well, check the forum thread:
Forums.taleworlds.com

Had to return and comment here again, this is the most beautiful map ive ever seen in Warband. Period. (EDIT) Okay so, this remains the best map ive SEEN in warband, but sadly with all this level of accurate deetail might brings some issues to the experience... Maybe theres way too many hills? maybe roads are too Thin in mountainous areas? AI pathfinding seems to have a hard time w this map, lords and bandits are constantly bumping into everything, they cant get away from their enemies.