Fall 1943, Koropove, Russia - South of Kharkov. DLC2 mission/skirmish overhaul on a brand new map. You must first secure the area and then stop BM31 rocket artillery convoy from reaching front lines. Rumor is russian have one of those old heavy t-35 tanks around too... Features: - Soldier models/skins are higher quality, ported from CH. - T-35 tank / Special operationals Panzer IIC tank available. - Brand new map used for this skirmish is also included as seperate mod with this package. Bog 4v4 map for both combat/assault zones multiplayer modes. skirmish/script/skin tweaks/T-35 tweaks by DJSatane / map by Vashyo / BS-3 AT gun, Rocket Launcher BM-31-12 & Studebacker truck by Normand / T-35 tank model by Cromtec / Special thanks to DMS as this is originally based off their skirmish scripts / Special thanks to 1C/1C multimedia for some MoW:CH soldier models/skins hide detail

INSTALLATION:- Extract the mod folder from the archive.
In this folder, you will find the mod folder that you have to move in the "mods" folder inside your Men of War: Assault Squad directory (if this folder does not exist, create it)Normal Path to Men of War Assault Squad: - DvD version: C:\Program Files\1C Company\Men of War Assault Squad\mods
- Steam Version: C:\Program Files\Steam2\SteamApps\common\men of war assault squad\modsAfter install this mod, when you open the skirmish menu, you will see [Germany] Koropove listed as first mission under Germany faction. Click on it to access the mission.
In multiplayer it will show up as first mission under Skirmish/[Germany] missions.
If you want to play this map in multiplayer you have to activate "4v4_Bog" mod that comes includes in this package. Then just click multiplayer and u will find this map under name "Bog"
for both assault zones and combat.
FOR HELP, SUPPORT, TIPS, bug reports etc:Contact user "djsatane" on Digitalmindsoft forums:http://digitalmindsoft.eu/forums/member.php?14588-djsatanehttps://twitter.com/#!/DJSatane 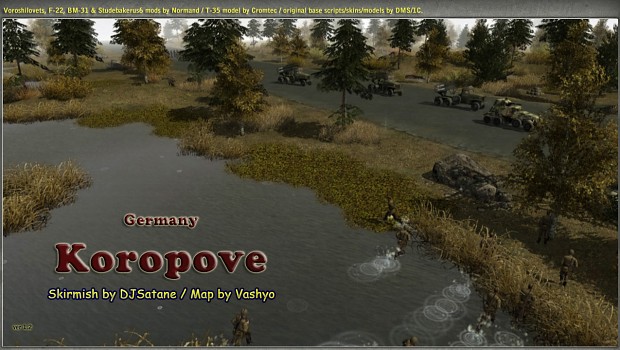 Thanks for the map. Would you mind if I used a heavily altered version in an addon , set in Borneo, I'm thinking of making ?

SOrry to get back so late! sure no problem lol.