"Escape" is an SP version of the IW MP map "Backlot". It's my first map and first release. In this level you play as Nikolai prior to the events of Call of Duty 4: Modern Warfare. Nikolai was captured behind enemy lines while feeding information to his ally and know Russian Loyalist, Kamarov. "Escape" picks up as two Russian Loyalist soldiers attempt to rescue you and get you safely to an exfil point. Geo is mostly Backlot, with some custom geo in the beginning of the level and many tweaks to get Backlot to work and flow correctly for SP. Scripting is all new. Thanks for playing!

Check out the video here: Youtube.com

Place the .iwd file in the "/main" subfolder of your Call of Duty 4 folder.

Place the .ff file in the "/zone/english" subfolder of you Call of Duty 4 folder.

Run COD4 single player, open the console with the "~" key.

You may need to enable the console in your options if it doesn't open.

Type this in to the console (without quotes): "map vf_escape" and hit enter.

Enjoy, and thanks for playing!

Email me if you have any questions/feedback, etc. -- skytram@gmail.com 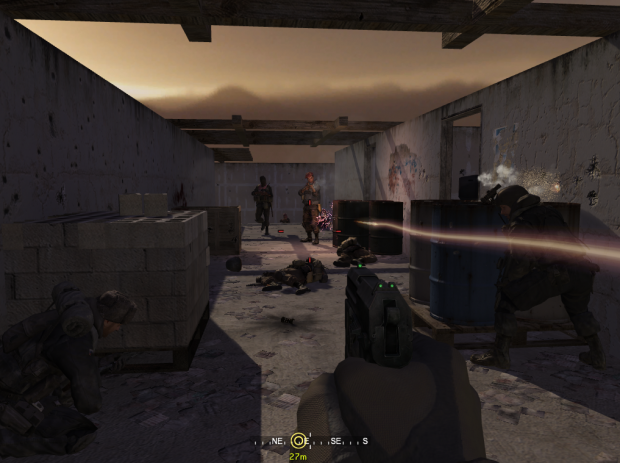 Theres one similar to this, expect you are the OPFOR and that the Americans are attacking.
Callofduty.gamefront.com

Just played it, it was really good, but there are no voices.

Hi attackzone, thanks for commenting!

All of the VO of your friendlies is in Russian, because you are all Russians!

Actually it was just a way for me to put in VO with subtitles without recording new lines.

yea, it looks like some kind of continuation of the mission that attackzone posted, beucase in it Nikolai is also captured.

it was a cool map! hope for another continuation of this where Nikolai was captured again and sent at the place where the blackout level was ...

it's working just for iw3sp

Kool mod ....just tooo short lol. Side note ... I played the original backlot mod for sp awhile ago (a couple yrs or so ago)... I could of swore i played as USMC instead of opfor, once. Do you know if there is a way to switch back and forth? I can't remember, brain's getting to old!!