5 single/multi-player maps for owners of Disciples II: Dark Prophecy with Guardian of Light and Servants of Dark expansion packs. Changelog is in ZIP file. 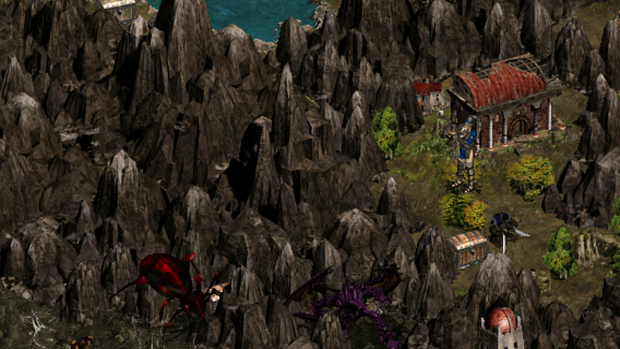 Hey there. First off all, I gotta say that I'm really happy to see people still playing this game 17 years later and that some are even making maps for it. I completed all 5 maps you've uploaded here and all of them were quite enjoyable.

I'll comment on every map individually, but one issue that all maps had was poor grammar. I assume English isn't your 1st language, and that's okay, the dialogue and quest objectives were mostly understandable throughout all maps, but if you'd like, shoot me a PM and maybe I'll be able to help you fix it.

Completed as Legion's Mage Lord on Very Hard difficulty in 185 turns
Since I like big maps with as many factions as possible, I picked this one 1st. I also tend to full clear maps, hence the lenghty turn count. This one felt rather standard. Various points of interest, shops (Magic shop with wards was very helpful, especially as Legions), some lore events. 1 fix I'd suggest is to the northern part of the map with the undead. Since I conquered lands around Mountain Clans 1st, the Undead started clearing that part of the map before me. They were doing fine until an Undead Warrior Lord attacked a Werewolf. Since it's immune to both Weapon and Death types of damage, the party literally attacked and ran away, twice per turn, for good 70 or so turns until I eventually got there and cleared them out. Overall this map is okay, I also liked that the final boss was in a dwelling, which meant I couldn't cheese it with all the debuffs Legions have.

Completed as Mountain Clan's Warrior Lord on Very Hard difficulty in 152 turns
I liked the early game of this map A LOT. It was fairly challenging and I was forced to use various spells constantly, which I often find myself not doing in other maps. I also really liked various difficult enemies, which you can encounter fairly early on and with a bit of effort, tackle them down immediately (Elves in Taura city, leveled up Black Dragon inside Dragon Fortress). However eventually, when I could instantly resolve most fights, I became a bit bored and didn't bother exploring the Undead part of the map. I suppose various Orc, Ogre and Troll parties are basically the same challenging early game as are Elves for Mountain Clans, but they felt like XP farms at that point, so I didn't really bother. Also, the events where more Mermaids and Orcs spawn happened at some point, but I didn't notice it, I assume some enemy parties spawned inside the fog of war? 1 fix I would suggest is to the caged Water Dragon - I don't know if it's intended, but it's not actually caged. I killed it before entering the centre part of the map and eventually it was released through an event, but it was already dead. Also, it is said that the enemy can control dragons, so I personally expected to see more of them.

Completed as Empire's Guildmaster Lord on Very Hard difficulty in 119 turns
The early game here was pretty cool too, Didn't use as many spells (Holy Armor OP), but some enemies were still challenging. The map was pretty interesting too, but felt rather standard as well, perhaps because of lack of events. The quest states that we must capture 3 towers and then the main castle before enemy sentinels overwhelm us, but I really didn't feel an overwhelming force trying to stop me - 1 enemy party every 3 or so turns that I could insta resolve wasn't very threatening. Perhaps spawning more parties would be a nice fix.

Posting as a separate comment because of character limit

Completed as Empire's Guildmaster Lord on Very Hard difficulty in 80 turns
I'm conflicted about this one. The map felt very linear and was rather easy. All I had to do was to avoid parties with Imperial Assassins until my healer leveled up and I could insta resolve most fights. Also, the map states that the quest must be completed in 200 turns, but it took me 80 while clearing absolutely everything on my way to the objective. It also stated that both factions should cooperate with eachother in order to win, but I really didn't see how or why. Another gripe I have with the map is the "Meteor Tower". I accidentally found the tile it triggers on with my Rod planter, so I was ready to prepare for it when moving through. But then some turns later, I found out you can avoid it entirely by taking another path it doesn't trigger in. The tower itself sat right next to the map objective, so what's the point in capturing it if you can just beat the map instead? I'd recommend moving it somewhere, so it could be a problem earlier and be dealt with before you can complete the map. Also, if it was your intention to make it so both factions have to cooperate with each other in order to win, could you explain how?

Completed as Empire's Mage Lord on Very Hard difficulty in 74 turns
This map was cool because of 1 thing - Mercenary shop with an Alchemist inside it. I REALLY liked the fact that we were able to have one in our party, because it opened up several strategies during battles. It was possible to double heal, attack twice with my Mage Lord to clear the backline or mow down a single target with Angels if needed. The map itself was okay too, although I didn't end up fully clearing it, since I just so happened to run into the Undead capital and then found the Medics' Chieftain, so I decided to complete the map. The objective was a bit difficult to understand. I assumed that we had to rescue the Medics' Chieftain, then take him to all taverns (Item Shops?) and then take him to our capital, but I simply pathed him towards the capital immediately and won. Also, I killed the Barrira's Illusion, got the event saying Myzrael died, but didn't lose and ended up winning next turn. Not really sure how that was supposed to play out. Overall, I think the Undead should take a while to be found, I personally had half the map covered when I completed the map.