This effects gfx has been archived by the uploader because it is out of date and no longer supported. We recommend you browse the file list for the latest effects gfx.

This addon has been tested with v26.1 of the Bugfix mod but will likely work with any other versions of the same mod as well..

This addon is intended to deal with what would appear to be incorrectly entered Armour Piercing values for some abilities/weapons. It is offered as a separate addon because installing it will have balance implications.

If you have any comments or suggestions about this addon, feel free to contact me at meet_soul_reaver@hotmail.com

This obviously is a mistake, since there's no practial reason to set the values above 100%... unless, that is, these weapons/abilities were originally meant to do a lot more damage to certain target types than they currently do.

This is supported by the fact that a couple of these abilites/weapons seem to be a bit underpowered for their primary purpose. The Imperial Guard General's Strafing Run, for example, does equal, rather lacklustre damage to all targets... but if the 300% damage vs infantry actually worked, it becomes really deadly against infantry, and actually does what its tooltip says it does (ie, can potentially wipe out whole squads... if they're too slow to get out of the way, of course). Similarly, the Tau Crisis Suit's relatively underwhelming Missile Pod weapon upgrade works a lot better in an anti-vehicle role if it's doing 140% damage to light vehicles and 120% to medium vehicles like the armour pierce values suggest it should be doing.

These considerations make me think that the original intent of these abilities/weapons isn't being met because someone coding the values wasn't aware of the 100% armour pierce cap. To overcome this, I've modified the damage and armour pierce totals so that the weapons will now be doing their 'intended' damage to all targets.

There are two arguments as to why implementing this bugfix might not be a good idea:

1) There are real balance implications to this change - several units and abilities gain significant damage buffs against certain targets.
2) I can't be completely certain that the armour pierce values really were a mistake - it could be that while they began as a mistake, they were simply left later since playtesting ended up showing that the effective damage they were doing was sufficient.

With this mod installed, Strafing Run becomes a powerful ability; Harlequins change from being good to being absolutely deadly against Commander-type units in melee; Hellhounds become very efficient listening post/base defence raiders; Crisis Suits with Missile Pods become more effective against vehicles; and Psykers... well, I suppose they do a bit more damage to very heavy infantry units with one of their abilites. This will certainly change the game balance a bit. Not everyone will like these changes.

Rather than forcing an opinion on players, I thought it best that you can choose whether you think the values should be corrected or not. If you think the original values are wrong, install this fix. If not, or you think the balance implications are too great, then leave it be.

The addon does the following:

Note that the Vindicare Assassin's rifle also does slightly more than 100% armour pierce against a number of targets, but it exceeds 100% by only such a tiny amount (less than 1%) that a fix isn't really warranted and thus hasn't been included.

If you choose to install this addon, you will have to ensure anyone else you're playing the Bugfix Mod with is using not only the same version of the Bugfix mod, but has this addon installed as well.

If you want to remove this addon after installing it without having to reinstall the entire Bugfix mod, you can do so by running "Remove Dark Crusade Armor Pierce Fix Addon v26a.exe" from the Bugfix folder. It will restore the 'basic' values of the Bugfix Mod v26.1. 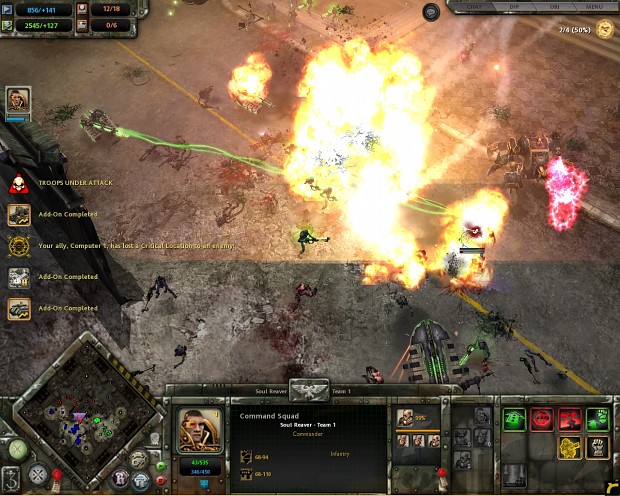