is an own modsystem which was originally developped by Seltsamuel for Snej Mod. I saw many advantages for all players and modders, so I decided to reconfigure the whole system in a way that every Diablo2 Mod can benefit from. It allows to use any diablo version from 1.07 to the latest, 1.13c and NEARLY every mod every made in parallel.

D2SE generally is an own modsystem which was originally developped by myself for Snej Mod. I saw many advantages for all players and modders, so I decided to reconfigure the whole system in a way that every Diablo2 Mod can benefit from.

D2SE consists of two main components:
1. The Modmanager, which is interesting for players as well as for modders
2. The Code Modsystem which is mainly meant to be used by modders

This part mostly is about the Modmanager, which is released. The Codesystem will follow when it will be finished. I devided this instruction to get a better overview for players and modders. Firstly the features which are interesting for both sides:

The D2SE Modmanager allows you to use the Diablo2 versions 1.07 1.08 1.09b 1.09d 1.10f 1.11b 1.12a 1.13c AND nearly every Mod which is based on one of these D2 versions in parallel. The D2 versions (almost 13MB) are already included in the basic installation of D2SE (from now on called "CORES") and therefore are guaranteed clean and identical bases for all mods and players. The mods are NOT included and have to be installed seperately. This will be explained in the appropriate topic where the downloads are. There wont be ANY copied or changed files while switching between a mod or D2 version. Also, the mods don't have to bring ANY unmodified files - just the basically modded ones, which makes a distribution simple and way more smaller. No more unnecessary files in your mod - you can concentrate on the basics now.

D2SE supports the following Modsystems: PlugY 9.0 (Cores 1.09b-1.12a), d2mod.dll (Core 1.10f only!), nefex.dll (Core 1.11b only!), D2Extra.dll (Cores it was created for) and - for sure - the D2SE Codesystem plus the D2SEUtility.dll (all supported Cores!) which will be released before the Codesystem. D2SE allows you to load modified D2 .dll's directly from the modfolder. All .dll's which do not exist in this folder will be loaded from the clean core folder of the specific version - fully automated. Additionally, Plugy can be enabled or disabled individually (for each mod which allows it) at the graphical user interface of D2SE via checkbox.

D2SE gives an own "save" folder to each mod and Core for all savefiles which are located IN the mod/Core folder. This also applies to the Plugy shared stash and all logs and screenshots. A clear slogan: Everything which belongs to a mod is IN the specific mod folder - nowhere else!

D2SE defends all D2 Cores and mods from DEP (Data Execution Prevention) and fixes an issue with the AERO Windowsinterface of Win7 and Vista (counting numbers in one edge of the screen). So AERO can stay turned on! As a bonus, the ability to start multiple instances of Diablo2 to be able to mule in SP/MP is allowed. (But only the first instance is able to connect to a realmserver! Snej-players already know this feature) You just have to start D2SE.exe another time - as often as you want!

D2SE does NOT need a CD in your drive (applies to every mod and version) and informs you about problems with your installation (red/green CD symbol) by clicking on the CD symbol.

The choice between mods and core versions at the graphical user interface (GUI) is very comfortable. There you can make your settings, which are REMEMBERED by D2SE seperately and INDIVIDUALLY for each mod and core version. D2SE also REMEMBERS the mod/core version which you chose the last time, so you can simply press your "ENTER" key or click the "Start D2" button when you opened D2SE to run the mod/core version you ran at last - with the specific settings you made. If you want to start a mod quick, without changing your settings, simply doubleclick the banner of the mod you want to play. The D2Vidtst and the Glide-init are selectable directly so you can configure the graphic settings. You can adjust all important settings DIRECTLY.

D2SE offers free adjustable buttons to every mod. Those CAN link to "Readme" "About" "Homepage" "Forum" and "Configure Mod". In addition, every mod can load up to 3 own .mpq files (which you can name by yourself) and with a higher priority than patch_d2. you can even deactivate loading patch_d2.mpq - more details in the instructions for modders.

D2SE sets the correct Realmserver as Gateway for all mods which have realmsupport. It also changes the realmport to the right one AND correctly selects the realm of the specific mod in the charselection screen ... automatic. No more fiddling about regfiles or regeditors and no more forgetting to choose the right realm. ^^

D2SE soon will be able to update itself and every mod which supports this feature by a simple click via AUTOUPDATER.

You just have to keep this in mind:
- If you want to play all vanilla versions or mods in SP/MP (TCP) mode or on a private realm -> start D2SE.exe
- If you want to play legal and unmodified in the official Battle.net -> start the common Game.exe
You can update your D2 installation at anytime, even if D2SE does NOT know and therefore does not support this patch. This neither disturbs D2SE, nor any of the mods you can start via D2SE. D2SE makes its mods completely independent of Blizzard's Patchmania and allows you secure playing in the Battle.net despite you can play mods. But then you have to start Blizzard's Game.exe!! 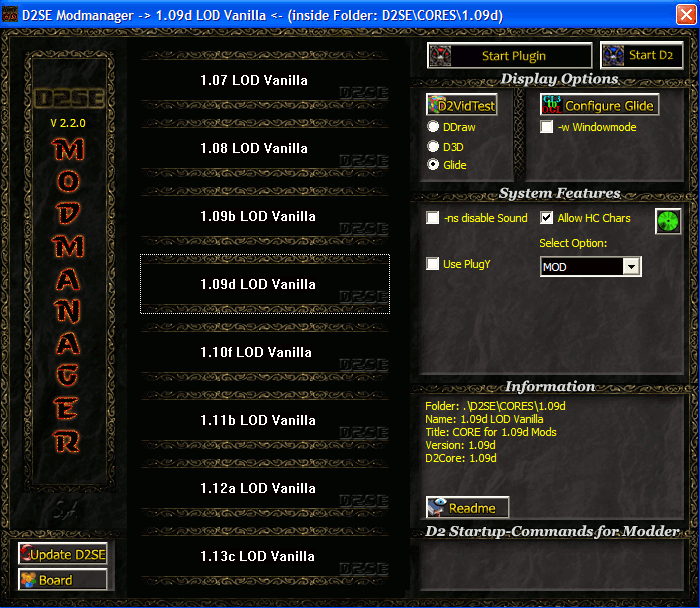 This program is free software. I (Seltsamuel) grant permission to use, linkto and redistribute the ORIGINAL and UNMODIFIED Installer and its complete documentation inside this board without further notification according to the following TERMS:

You MUST own a valid license of Diablo II and LOD. I do not support any piracy.
if you dont have the original you are not allowed to use D2SE and have to delete it immediately!

You are not allowed to do ANY modifications of the D2SE Modmanager, its freeware but this means not that it has no copyright.
The purpose of the Modmanager is to give ONE similar platform to all modders and players - spreading modified versions and forks is against this spirit. If you want to enhance it or have ideas to improve it get in contact with me, D2SE in all parts is under continuing development.

You are not allowed to charge ANY money for D2SE Modmanager.

This program is distributed in the hope that it will be useful, but WITHOUT ANY WARRANTY; without even the implied warranty of MERCHANTABILITY or FITNESS FOR A PARTICULAR PURPOSE. This software is provided "AS IS", and you, its user, assume all risks when using it.

I tried to keep it free and simple for you, so i hope nobody forces me to make it more restrictive ;-) 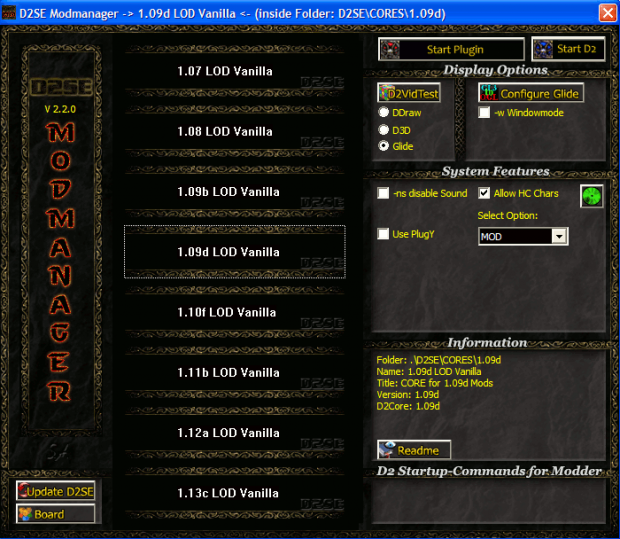 This is great, but I just have one problem. My machine ran vanilla 1.12 just fine before I installed this, but now any version or mod I try to run will work, but is so bogged down as to be unplayable. Are there any settings I can change in order to speed it up, or am I just screwed?

I switched to DirectDraw and it works now.

Does it support Eastern Sun? I cant Seem to get them to work together.

Zy-El doesn't want to work either. Am I doing something wrong, or is the claim that it supports almost every mod exaggerated?

Nevermind, I figured it out. I'mma shut up now.

how do i install this on OS X yosemite for mac?

One of the best invention for diablo 2 mod fans :)

how to add mod from Modsmanager

Can't seem to even have D2SE.exe to launch. It tells me that D2VidTst.exe was never run on this system and that it will launch it before proceeding. Except D2VidTst.exe won't launch at all. Meaning, D2SE.exe won't launch at all either. Is it because i am on Windows 10? Or because i installed D2 on Windows 7 before upgrading to W10? The game and PlugY 10 work with no problem though. Well, guess i will pass on this manager.